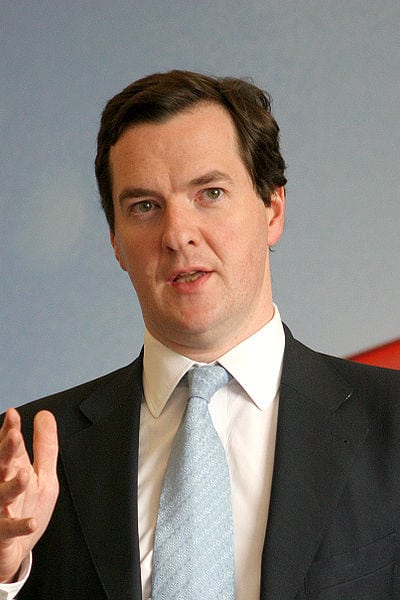 The UK is no longer in recession, but how much of that is down to George Osborne and the Conservatives? Photo: Wikimedia Commons

Following months of hysteria over the Coalition’s ruthless economic approach, the recent news that the UK economy grew by 1% between July and September was warmly welcomed by the government and the Treasury, in particular. This indicates that the economy is now out of a double-dip recession. Nevertheless, one must look at the data before deciding whether or not this truly shows that the UK economy is on the road to recovery.

The period in question was quite extraordinary and the growth in GDP owes much to the Olympic Games. Ticket sales for London 2012 alone accounted for 0.2% of the growth. The boom in the aviation and hotel industries in the capital also made a significant contribution. “More than half of the quarterly increase is attributable to the Olympics and the reversal of the jubilee effect in Quarter 2,” concluded Graeme Leach, Chief Economist at the Institute of Directors. So it would be premature for Cameron, Osborne et al to pop the champagne corks and propose a toast to a great and certain recovery.

Rather, their time would be better spent implementing policies which inject confidence into struggling sectors of our economy. For example, the recent figures show that construction has fallen by 2.5% in the last quarter. The lack of demand in the economy means that construction firms are risk-averse in their approach. Recent research by Post Office Mortgages has shown that the average first time buyer in the UK is now 35 years of age. This demonstrates the lack of affordable housing – a problem that the government must address with greater urgency. As opposed to reassuring us that a recovery can be achieved across the economy through Osborne’s ‘Plan A’, it is now time for the government to take responsibility for injecting demand into the economy, so as to boost jobs and growth.

In an unfamiliarly positive week of press for the Coalition, unemployment fell by 50,000 – yet two-and-a-half million people remain in search of a job. This fall in unemployment doesn’t tell the full story, however. 1.4 million people are currently in part-time positions because they were unable to find full-time work – close to an all-time record. Youth unemployment remains an area of grave concern. Here in the North West, there has been a 53% increase in the number of long-term unemployed 16-24 year olds since the Tory-Lib Dem Coalition was formed two years ago.

Whilst some may insist that the UK is back on track, the outlook for graduates remains bleak. A recent study by the Higher Education Careers Service Unit has reported a 6% rise in the number of graduates who are currently in ‘non- graduate’ roles, such as low-skilled jobs in retail and customer service. The study also found that the number of graduates looking for work after six months has risen to 8.6% over the past twelve months. As undergraduates seek to maximise their employability in order to gain graduate-level employment upon completion of their degree, the competitiveness of the job market shows no sign of relent.

Although inflation is falling, the cost of living is still rising – particularly due to the fact that wages are not increasing in line with inflation. The chronic lack of confidence in the labour market means that many hard-working people are primarily concerned with keeping their jobs, rather than securing a pay rise. Asda was the first supermarket to reduce the cost of petrol last week, with a 2 pence drop in the price per litre at the pumps. The government quickly praised Asda, and the supermarkets that followed suit, without acknowledging that wholesale prices of fuel fell by twice as much!

Despite the emergence of the UK from recession, the fall in unemployment and the fall in inflation, the main problems that the UK economy faces show no signs of subsiding. As Chancellor George Osborne recently announced a further £10 billion cut to welfare spending, one cannot help but question how much these measures will cripple demand in the UK economy. Instead of satisfying the right-wing of the Conservative Party Conference, the Chancellor should take a more long-termist view on how to help people in to work. He must understand that the grossly distorted rhetoric about “scroungers” will not help the long-term unemployed to find work.

Whilst the growth we have experienced over the past three months is undoubtedly welcome news, one reasonably concludes that it has been an artificial result of one-off occurrences, notably the Olympic and Paralympic Games. This was a golden summer for Britain, but the performance of its economy can be best summarised as ‘could do better’. Until the government addresses the problems of housing, long-term unemployment and youth unemployment, the possibility of a triple-dip recession looms large.