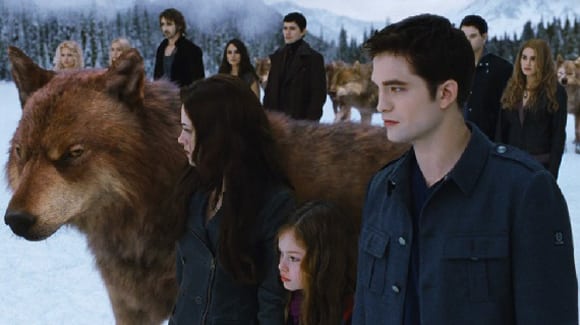 On November 15th Manchester Printworks Odeon screened The Complete Twilight Saga, all of the Twilight films in their entirety with the final instalment, Breaking Dawn Part 2, showing at midnight. The result? Twelve hours of entertainment on an epic scale. This was every Twilight fan’s dream – reliving the entire saga complete with bonus interviews with cast members and fans. I especially enjoyed the interviews with the total nutters, the pick of the bunch being one “twi-hard” who was not only fiercely holding back tears from eyes brandishing blood-red contact lenses, but clutching a life-sized wolf’s head!

Prosthetic wolf heads aside, I am not ashamed to admit that the near-hysterical atmosphere was contagious. As the jam-packed cinema chorused the final ten-second countdown, I honestly didn’t know what to expect. With promises of a surprise ending, author Stephenie Meyer stepping up to the role of producer once again and the scandal of the R-Pattz/K-Stew break up, the anticipation surrounding this film has been huge. But with this anticipation came speculation – how do you follow the outstanding success of Breaking Dawn Part 1? Director Bill Condon had his work cut out, but definitely rose to the challenge. This film delivers on every level and, most crucially, is not just one for Twilight fans; but a cracking piece of blood-fuelled entertainment for everyone.

After Bella (Kristen Stewart) has successfully settled into life as a vampire wife and mother, Breaking Dawn Part 2 deals with the Cullen family’s final showdown with the Volturi – the slightly bizarre Italian-based branch of the Vampire world. With Bella acting more Bela Lugosi than Bella Swann, her transformation takes her into a completely different world, with Kristen Stewart surprising everyone with a genuine star turn – transforming not only physically but emotionally too.  Cool, feisty and confident – this Bella was poles apart from the Bella of the past four films, demonstrating great knowledge of the books and proving that Kristen is quite the twi-hard herself! Sprinting, climbing and arm-wrestling, Bella was loving the life of a vampire and stunning visual effects took us right into the heart of the vampire experience for the very first time.

Of course, the film (like the book itself) wasn’t without its clichés. Whilst there were a few too many scenes of Edward (Robert Pattinson), Bella and a sometimes terrifyingly CGI’d Renesmee (Mackenzie Foy) playing happily families, these were cleverly complimented by the arrival of extra vampires, colourful characters and brilliant one-liners. This film embraced the book’s cheesiness, not shying away from a tricky line in self-deprecation.

But what made the film so brilliant was its unpredictability. Moving at a furious pace towards an incredible and shocking climax – no one, Twilight fan or not, had any idea how it was going to end. Twilight may well be the film world’s version of Marmite, but this particular film had something for everyone to sink their teeth into. It was never going to be easy to bid farewell to the saga, and whilst none of the films will ever be able to beat Twilight itself, Bill Condon created a film that was a homage to the books, to the fans and to the saga itself. Love at last bite? I think so.