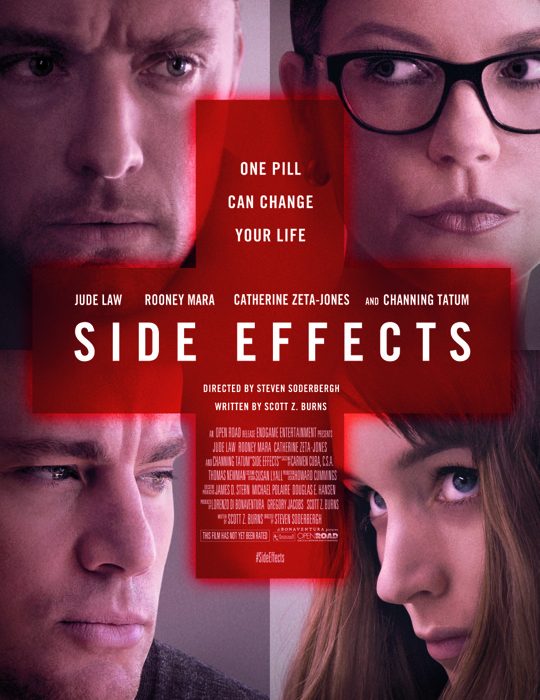 Movie Poster for 'Side Effects'

In what is believed to be Steven Soderbergh’s last big screen effort behind the camera (he announced his impending retirement in early 2011), he brings together a cast of A-list stalwarts and younger stars who are quickly becoming Hollywood heavyweights, in a twisty psychological thriller warning of the dangers of prescription drug use. The story follows a young woman (Rooney Mara), who starts to unravel due to the unexpected side effects of the medication prescribed to her by her therapist (Jude Law), to help cope with the anxiety of the return of her husband (Channing Tatum) from prison.

Intentionally only releasing a vague plot outline, the marketing of Side Effects has focused on uncertainty and the unknown in order to increase anticipation and mirror the themes of the picture. Influenced by Hitchcock, the aim was to create a sharp film – all impact without any of the extra elaboration of some of his previous works. The trailer reflects this devotion to mystery and tension with dramatic cutting, as any real plot details seem to be in danger of giving away major spoilers. Therefore we are left with a panicked sense of fear, danger and the idea nothing is truly as it seems. At advanced screenings viewers were turned away if they arrived late as an early twist is seen as so crucial to the plot that much of the impact would be lost if it was missed.

Law has previously worked with Soderbergh on plague thriller Contagion, as has Tatum on action flick Haywire and the unforgettable Magic Mike; so the director must have been confident of their performances and their ability to cope with the complexities of the characters, having covered such diverse fields together. Rooney Mara always seems to bring it, no matter what the role, and it will be interesting to see the intensity of her performance without the safety blanket of a full gothic makeup and wardrobe, as she had in The Girl with the Dragon Tattoo, to help her dive into character.

Whether the intricacy of the plot trips itself up or not remains to be seen, but as Soderbergh’s previous efforts have shown he knows how to crank up the tension, as well as how to create visually striking and memorable moments. Side Effects is still sure to be a dark, stylish and gripping swansong for the respected director.