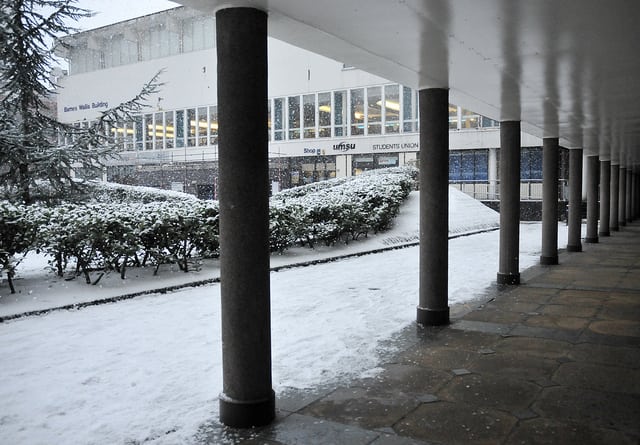 North Campus students called a meeting with the SU because they felt neglected. Photo: N Bojdo

The University of Manchester Students’ Union is joining efforts with North Campus students to bring more life to the secluded area.

Students met with members of the SU’s Exec Team to discuss the neglecting of North Campus, with unused rooms and lack of social activities being the main concerns.

Haider Khokhar, the organiser of the meeting and an Electrical and Electronic Engineering student based at North Campus, said that the final straw for him was the closing of Harry’s Bar.

He said: “One day I found out the SU closed down Harry’s Bar without even bothering to tell us and I rang them straight away.

“After a while Nick Pringle got back to me, explaining that Harrys Bar was causing great money losses every year. We arranged to meet and he was as amazed as we are with the potential of North Campus.

“There is so much empty space that could be used for study rooms and there’s even a completely empty sports halls in Sackville building that is only used twice a year for exams.”

But he argued against introducing a North Campus rep, saying: “Having a rep just for North Campus would only emphasize that the two campuses are separate. It would be much better to create a relationship between both.”

Nick Pringle, General Secretary at the SU, was satisfied with result of the meeting. He said: “It was a really good opportunity to find out what students want. We got a lot of feedback from a good range of students.

“Now the plan is to meet with the students again and with the University to find solutions. There are some quick fixes to be done but other things will take longer.”

Mr Pringle justified only addressing this issue now by admitting: “This meeting was only a success because it was organised by students.”

When asked if the issue will be left unattended when the new team of execs take over next year, Mr Pringle said: “Whoever carries on needs to know the importance of this issue, but it’s also essential that students get involved.”

Attempts to bring North Campus back to life may struggle following October’s announcement of a new single sited main campus.

This will be part of a £1bn investment, which aims to bring every discipline together in one campus in 2018.

Luke Newton, Education Officer at the SU, believes it is still worthwhile to invest in North Campus. He said: “It’s important for the SU to help the students form a community.

“Resources are already stretched so it’s key to engage with active students and help them make use of what they already have in place for them.”

Mr Khokhar agrees: “I know they’re moving but there are still two cohorts of students that will only experience this campus and they cannot be neglected. It won’t be a sustainable investment but it has to be done because we pay the same as other students.”

Lydia Westwood, a first year student in the Materials school, supported the move. She said: “It will probably allow students to feel more part of a community. We’re here in our little bubble so we don’t have the same experience as students in South Campus.”

But Rhona Dalgish, another first year student in the Materials school, contested: “I think it’s a shame to lose the great legacy of North Campus.”

Professor Dame Nancy Rothwell, President and Vice-Chancellor of the University, categorised North Campus as ‘challenging’ in a Question and Answer session last Monday, but praised the SU’s work.

She said: “The Students’ Union has been doing a great job and your attempts to engage students more widely across the campus are very important. This is particularly so in North Campus, because it is a challenge getting out there.”