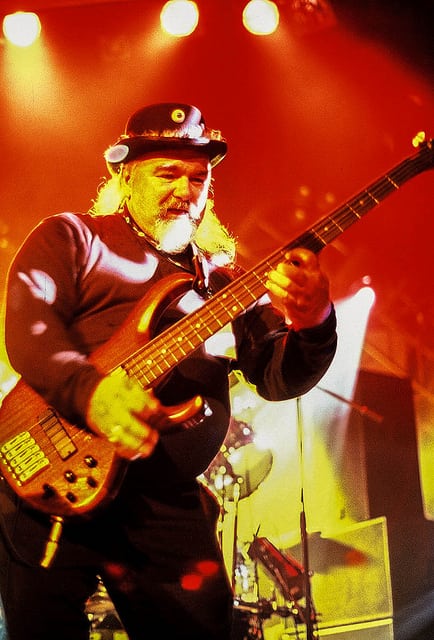 The Magic Band rolled back the years with a riotous set at Band on the Wall. Photo: Sean Hopson

Band on the Wall

Had the uninitiated stumbled into Band on the Wall last Thursday they would have been greeted by what may sound like the world’s worst band; Clashing chords, flat vocals and strange offbeat rhythms. But if by some chance they stayed around long enough to actually listen, they would in fact hear a tightly rehearsed and well received show by one of the influential bands of the 60s. This is The Magic Band, of Captain Beefheart’s Magic Band fame, whose famed seminal album Troutmask Replica is regularly found in top 100 lists in countless reviews, even if it is the weirdest album there.

Of course, Don Van Vliet – Captain Beefheart himself – is no longer with us. John ‘Drumbo’ French, previously the drummer in the original Magic Band takes over his vocals (and sax) with a great degree of success. He does a brilliant job interacting and bantering with the audience tonight, who are just as excited to see originals Rockette Morton on Bass and Denny Wally on guitar.

As performances go, not a bad word can be said – from the opening ‘My Human Gets Me Blues’ tangling of about 50 guitar hooks to the closing encore of ‘When It Blows Its Stacks’. An early cover of Howlin’ Wolf’s ‘I ain’t Superstitious’ gets even the oldest fans in the audience moving their feet whilst harking back to band’s blues roots. The crowd love every minute, their only criticism being the unavoidable absence of Captain Beefheart and the raw spontaneity he would have brought. But without a single spotlight the rest of the band shine, giving the night its highlights in the form of a few small solo sections. The Captain may be long gone, but no-one can say the magic is dead.