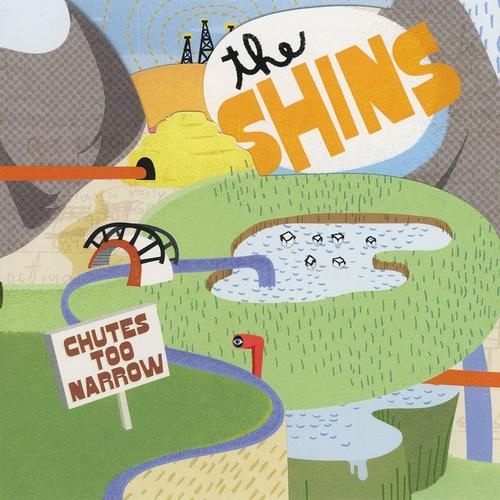 From the vault: The Shins – Chutes Too Narrow

On their debut record, Oh, Inverted World, The Shins offered plenty of promise; by taking a diverse range of influences, from The Beach Boys to Sunny Day Real Estate, and still managing to produce a cohesive collection of pop songs, lead singer and principle songwriter James Mercer demonstrated a mastery of his ability to match addictive melodies with delightfully smart lyricism. The release of their second full-length effort, Chutes Too Narrow, delivered on this potential critically and commercially, with unanimously positive reviews, sales of almost 400,000 and, perhaps more dubiously, Natalie Portman’s now infamous proclamation that the band would ‘change your life’ in Garden State. Most strikingly, though, Chutes fulfilled the creative potential present throughout Inverted, raising Mercer from the level of talented singer-songwriter to musical auteur.

2003 was by no means a fallow year for indie rock breakthroughs – Death Cab for Cutie, The Decemberists and Broken Social Scene all made their respective marks with well-received releases – but it was The Shins who produced the undeniable standout, with the scratchy, bedroom-recorded sound of their debut giving way to high fidelity; cleaner vocals, sharper guitars and a punchier rhythm section. That’s not to say that the band’s variety of influences was narrowed as a consequence; opener ‘Kissing the Lipless’ evokes the spirit of Pixies, the gentle, acoustic opening engulfed by racing drums and impassioned vocals; this flirtation with the quiet-loud dynamic would be revisited on their experimental 2007 follow-up, Wincing the Night Away. Perhaps the most remarkable feature of the new, cleaner production is quite how dramatically it unshackles Mercer’s voice; fans of the first album would surely not have had him down as the vocal chameleon he is on Chutes, shifting shape to fit in with each song’s tone; downbeat and melancholy on wistful closer ‘Those to Come’, quietly restrained on the Nick Drake-tinged ‘Pink Bullets’, and downright bratty on politically-charged stomper ‘So Says I’.

One attribute of Mercer’s that was never in doubt, however, was his delightful way with words; The Shins, like Belle and Sebastian and The Magnetic Fields, are a band who could provide plenty of joy simply presenting their lyrics as poetry. Societal ruminations – “Our lust for life had gone away with the rent we hated” – and deft historical observations – “just a glimpse of an ankle and I / react like it’s 1805” – are present and correct, but it’s on more familiar, lovelorn ground that they really excel; ‘Gone for Good’, a Wilco-esque country rock effort, spins a gorgeously eloquent tale of the trappings – quite literally – of monogamy.

Records like Chutes Too Narrow make you wonder about that old cliché pertaining to the second album; granted, there isn’t any shortage of sophomore efforts that have failed to live up to what came before, but perhaps if more follow-ups were crafted in the same vein as this one, with an onus on expanding on its predecessor rather than narrow-minded insistence on ‘topping’ it, we could enjoy watching a few more bands bloom like The Shins have.