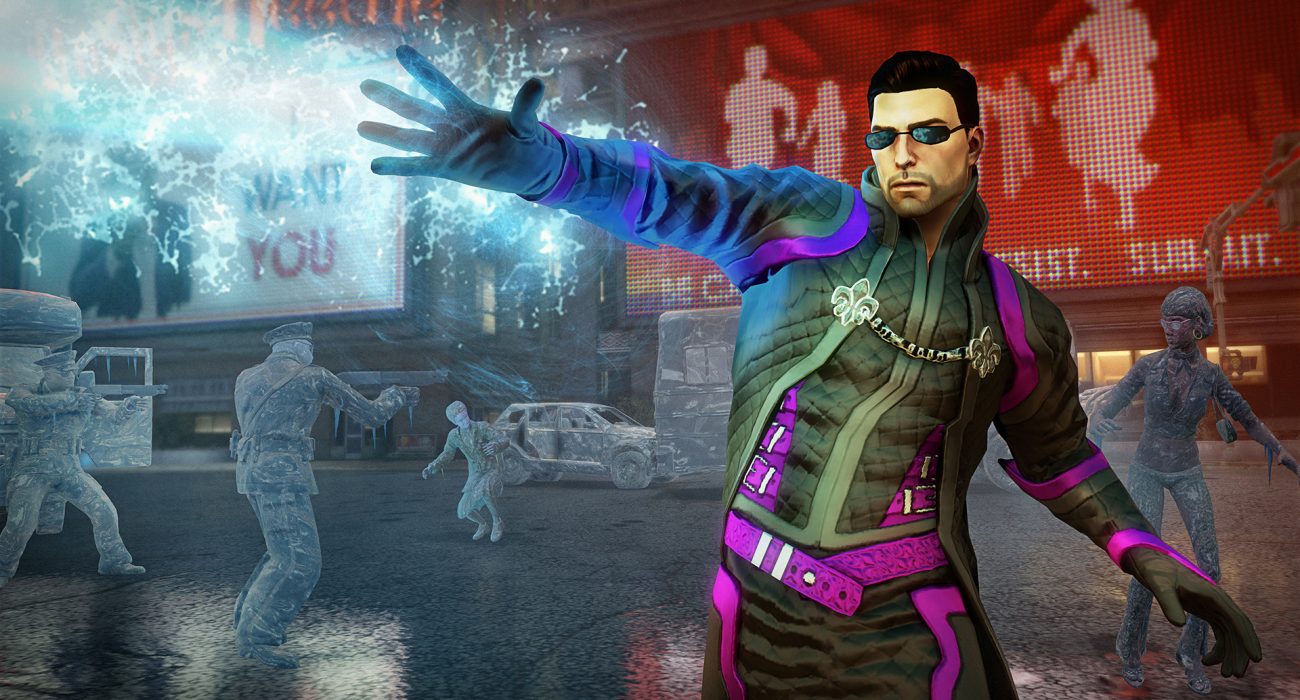 If Saints Row were a person, it’d be the type who would turn up an hour late to a fancy dinner party with a bottle of Sainsbury’s vodka and a crate of Fosters. It doesn’t take anything seriously, and it doesn’t think you should either. Since it’s inception, the franchise has been consistently compared to Grand Theft Auto. In a lot of ways, they were the same. Open world city, gang warfare, vehicles and violence. To say they’re the same now would be entirely wrong.

Where GTA took a serious and gritty turn, Saints Row went as far in the opposite direction as possible. In SR IV, the Saints have gone from street gang to US Government with your player character being the Commander in Chief.  However, an alien invasion and a Matrix-style imprisonment throw you back out into the city of Steelport to cause pandemonium. The game is packed with hours of missions and challenges all aimed at disrupting the simulation in which you find yourself and covering racing, fighting, destruction and stupidity. Particular favourites include the Mayhem missions tasking you to cause as much chaos as possible inside a certain time limit and given special equipment. Other missions include hurling yourself at traffic for insurance fraud, which often sends you tumbling and cartwheeling down the street at physics-defying speeds.

It seems the developers over at Volition have really thought about the genre and how players like to enjoy it. The classic formula is very much present, but the traditional drawbacks are lessened. Most people who own a game like GTA will have, at least once, entered a load of vehicle and weapon cheats to cause havoc. In Saints Row IV, this is no longer needed. Very quickly, you gain access to tanks, UFOs and huge guns and can use them at will. The scrap of paper covered in codes customarily tucked inside the game box is a thing of the past.

SR IV hands players a level of customisation some people might even refer to as “too much” given some of the hideous monsters I’ve seen. Every detail can be tweaked to create your very own President, and you can even view and download other people’s creations to every version of the game via the Saints Row website. The imagination of the community is endless, from the nightmare inducing to the almost copyright infringing.

It’s not just the characters that can be overhauled. Weapons and vehicles can be upgraded to produce more power, have bonus effects and look ridiculous and/or badass. Your abilities and powers can also be improved by spending the collectible clusters scattered around the city to make yourself truly unstoppable. It doesn’t take long to become too much for the local law enforcement to handle, and eventually all rampages are ended by a mini-boss fight with beasts known as Wardens. Being forced to stop during a rampage in a game that otherwise gives you complete freedom is quite jarring.

As well as the new vehicles and customisation options, Saints Row IV brings insane super powers into the mix. Now, the master criminal President of the United States can also fling people about with his mind, leap up skyscrapers and charge through traffic at breakneck pace. It adds another dimension to the feeling of freedom, allowing you to become the ass kicking, car crashing superhero you always knew you’d one day grow up to be and fantasise about becoming on the eve of every difficult exam.

It is rare that a game that spends so much time trying to be funny manages to consistently feel as amusing and fresh as Saints Row does. Whether it’s the inappropriate timing of “What is Love” playing on the radio, or the not so subtle “romance” option with EVERY crew member, the game can always conjure a proper laugh from somewhere. A main source of this is the many references to films, TV shows and other games. Saints Row takes on Men in Black, Firefly and Harry Potter to name just a few, and it doesn’t just nod to them. Several of the early story missions borrow heavily from the plot of The Matrix, one of the taunts your character can do is the beloved chicken dance as seen in Arrested Development and I’m sure there are many more that I didn’t even spot. Nolan North even has his own special character voice option, continuing his excellent run of being in pretty much every game ever somehow.

With its ludicrous costumes, pulsing soundtrack spanning techno to Tchaikovsky, and general disregard for other people or reality, Saints Row IV is the game equivalent of a fantastic night out with the most fun-loving friends. And there’s a dubstep cannon.