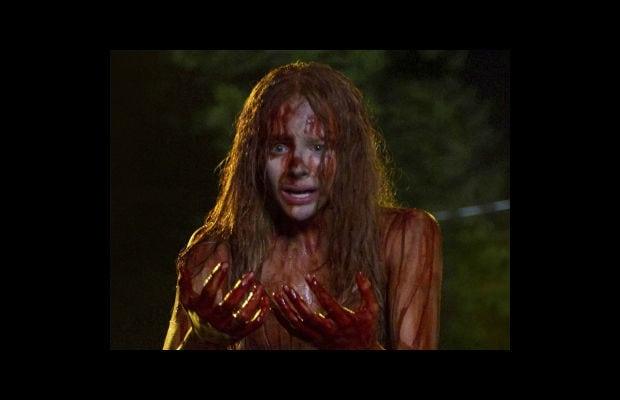 This October Stephen King’s 1974 horror novel will get its second chance to shine on the big screen. Carrie was largely seen as a runaway success in 1974 and many fans of horror fiction will recognise it as one of the stand out films of its genre. All that then, should highlight how much is at stake for this autumns’ A-list fright-fest.

You might think Chloë Grace Moretz would have shied away from taking the lead role in a remake of a much-loved classic – after all, her career so far boasts almost unblemished success in acclaimed roles such as Rachel Hansen in 500 Days of Summer, Isabelle in Hugo and Hit Girl(!) in the mega-money Kick Ass franchise. However, not ones to shy away from the expectant eyes of the public, Moretz and director Kimberley Pierce (Boys Don’t Cry and Stop-Loss), will hope to have increased their stock further with this latest foray into the Hollywood big-time. Pierces’ take on Carrie promises to stick closer to the King novel than the 1976 film version – mainly in an attempt to differ as much as possible from Brian De Palma’s take on the book. This may appease die-hard fans of the original, who will probably view this addition as a needless money spinner

Carrie is ultimately a horror-story centered on emotional abuse. As a film fan you would hope for a director with an impressive repertoire, that goes without saying. But also one able to take on the subject in hand and make it entertaining, even emotionally challenging, but not distasteful. In this respect, Pierce is a sensible bed-fellow for this Carrie re-run. Perhaps Pierces’ most impressive success to date is with Boys Don’t Cry; a film that cleverly tackles the challenges faced by Brandon Teena, a transgender teenager who lives life as a male until it is discovered he was born biologically female. Much like with Carrie, the film tackles the issues facing a young person with deep personal problems.

As with any horror remake, the chances are high that this film will be enjoyable, but lacking in the magic of the original. The horror genre is a pretty saturated market with a number of big franchises like Saw, Paranormal Activity and Final Destination. Market saturation is not the only challenge faced by Carrie. As with many of the aforementioned films, the horror paradigm seems to have hit a brick-wall of late. However with a decent director and a promising up-and-coming lead actor, anything is possible.