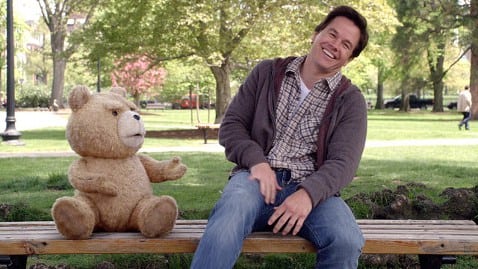 Hollywood has always had its A-list favourites. From Marlon Brando and John Wayne, to Uma Thurman and Elizabeth Taylor; this elite bunch are generally considered the best around, and it’s more often than not hard to argue with that premise. But from time to time conventional wisdom fails to deliver, and there’s a certain actor who seems to be the talk of Hollywood right now, none other than Mark Wahlberg, vis-à-vis the guy who was out-performed by a CGI Teddy bear… who you could say was a little over rated.

This isn’t a personal attack on Wahlberg, it’s worth mentioning he’s a reasonably nice person. I mean, he rapped on Radio One and basically hijacked a Graham Norton show, for which we should all be thankful. But if somebody is ever going to make millions in their career, you’d like to think they were the best in their industry, and Mark Wahlberg just isn’t that great.

His career started off reasonably convincingly with solid performances in Boogie Nights and The Perfect Storm. But since then it’s all gone downhill. Planet of the Apes in 2001 was boring, and Wahlberg played your archetypical ‘yippie ki-yay‘ American action hero/ astronaut. In 2003 he ‘starred’ in the remake of the 1969 classic The Italian Job, again playing what was essentially an American action hero who enjoyed driving fast cars and shooting clueless bad guys.

It was at this point Wahlberg probably realised he could make easy money by playing the same character over and over again; a character that is ultimately the Mark Wahlberg he wishes he was. Hence his decision to work out loads and spend millions on a personal gym. Four Brothers was a rare hit from Wahlberg, as a movie it worked and offered a good blend of wit and edgy violence, but I’m sure you can all guess by now what Wahlberg’s character Bobby Mercer was all about. Shooter and Max Payne represented nothing new from Wahlberg, he blows things up, shoots a few bad guys and then rolls off into the sunset – His performances don’t leave you on the edge of your seat, they don’t make you want to reassess your personal views or feel the need to down a stiff drink. And unlike others who ply their trade in a similar fashion (Bruce Willis et al), Wahlberg doesn’t have that stately charisma, that Hollywood big daddy image that an actor needs to play the ‘stars and stripes wielding American Exceptionalism’ card.

In Ted he was fine, but was carried by Seth MacFarlane’s wit – So maybe the best advice he could receive would be to stick to his role behind the camera, as a producer in the award winning TV series Boardwalk Empire or the recent thriller Prisoners where he was executive producer. Or maybe he would be better suited to a life in the Marines… where he can shoot things for real.