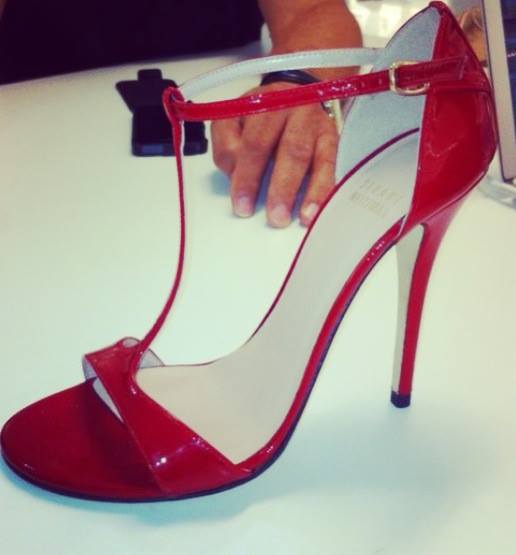 Summer is here! Oh, wait? Yes, it’s hard to believe in the depths of winter that we will ever see the sun again, however there is a light at the end of the tunnel as the buying season for the 2014 Spring/Summer Shoe and Handbag Collections has already come to an end. But what treats do the designers have in store for us next season? Will it be a season of sky scraping platforms or the return of the dreaded kitten heel!?

In general, trends that were creeping in last summer have been extended and exaggerated for the season to come. Studs are on their way out… finally! Not that I haven’t enjoyed the presence of studs the past few seasons, they can create a sought after ‘edge’ when paired with a somewhat ‘twee’ outfit. They have however, I believe, run their course; there are only so many studded items one person can own before they start to resemble some kind of weapon… In replacement of studs it is bold, bright colours that are making the statements. Lime green and red are making appearances but it is cobalt blue that is the colour of the moment. Having been introduced this winter it is continuing its presence through shoes, handbags and clothing next summer, so stock up!

Elegance is being favoured over comfort with the reintroduction of an abundance of stilettos and a worrying lack of platforms that have been making heels that little bit more bearable the past few years. If you’re a fan of big heels, stilettos are not your friend. Flat-forms on the other hand most definitely are, and there will be plenty of choice, from wedges to plimsolls. My pick was a bold tropical print, flat-form plimsoll by Victoria, that embraces the 90s trend that fashion is currently following.

White is the new white? Neutral became the ‘new white’ a couple of years ago, the go to colour for any outfit, phasing out white, which was deemed ‘tacky’ to some extent. But white has reclaimed its former title for this coming summer rebranding itself as the fresh, clean colour that will go with any busy, patterned outfit asserting all your shoe problems solved!

So for those who like to keep one step ahead remember to grin and bear the stilettos, don’t shy away from white and go bold with blue!