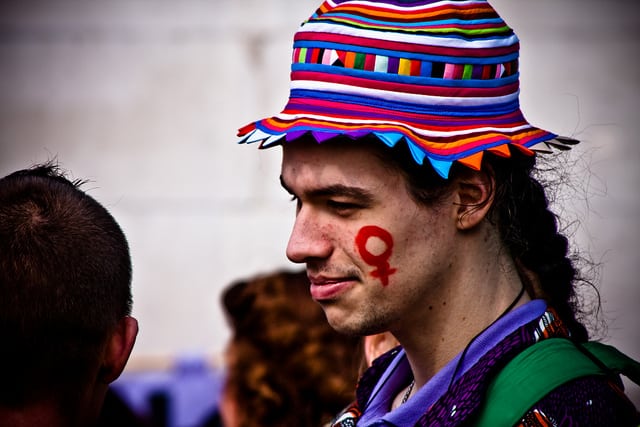 Men should be feminists too. Photo: Garry Knight @Flickr

The role of men in feminism

Feminism is unarguably one of the most controversial topics in any society. While some questions pertain to the definition of feminism itself, others concern themselves with the domains of feminist influence. But one unequivocal fact that drives all feminists is that the patriarchal society has oppressed women for centuries and this movement must achieve social, political and economic empowerment of all women over the world.

The present male-dominated system leads to a biased social order functioning to the benefit of men and the relative detriment of women. Thus, it raises questions about if men can or should identify themselves as feminists at all.

Some female feminists fear that if men are accepted into feminism, then a forum that was originally built to fight male dominance would too be taken over by men and make the entire cause redundant.

It is argued that females would no longer be able to relate to the issues raised by an action group that is ‘contaminated’ by male elements. They abhor the idea of the ‘oppressors’ joining in a movement against their own kind. One of the most common arguments is that men cannot relate to women issues simply because they have never experienced the torment of harassment, violence and sexual assault, and thus cannot identify themselves with the issues that this movement raises and what it seeks to change.

I reject this narrow idea of feminism. It labels all men all over the world as the same enemies and causes unjustified hate towards men by female groups. In retaliation, a ‘lad culture’ has emerged which perpetuates a belief that it is not masculine to support female rights.

Thus, this exclusion of men has spun off a cycle of hateful retribution from both the sexes which is not how feminism started out. The effort to make feminism a solely female agenda makes it the very image of sexism that it wishes to eradicate, and contradicts the basic feminist idea of looking beyond gender stereotypes.

Feminism was initiated as a drive directed at self-empowerment of women and enabling them to function independent of male support, not rejecting the entire male population and their experiences.
While it is true that men cannot talk about female experiences as well as a woman might be able to, this is itself an advantage. This diversity of experience intersecting components of the identity of one part of society which is constantly and inevitably in contact with the other part would expand the perspective and means of furthering this movement.

If men are not allowed to share responsibility for the success of feminism, then the patriarchal system that we seek to change will continue to suppress women. The desire to change a society that you believe is led by men—without the support of men—is unreasonable. It is not possible to stop subjugation of females if men do not think that females should attain equal rights. For seeking change in a patriarchal society, it is necessary that men can and should be able to become feminists.

The concept of involving men in feminism does not mean that feminists ‘need’ men; it just means that they’re welcome to support a cause that they believe is right. Men do not wish or aim to lead the feminist movement because they understand the feminine essence of the movement.

Various men like Parker Pillsbury and John Stuart Mill in the past have identified themselves as feminists and played crucial roles along with their female counterparts, to bring positive changes in the system.

Women have been heavily involved in causes that don’t directly affect them. You don’t need to be victimized by the system that you are fighting against. The only requisite is the ability to identify how and why the system is unjust and the way in which it needs to be changed for better.

It is absurd when the same feminists who fight against male domination reject the men who want to join the movement to change that image, because “they don’t know what it is like to be repressed.” If an oppressor transforms to join the movement against the subjugation of a victim, closing doors on him because he has not experienced that subjugation is imprudent because even though he might not understand the struggle of the victim, he does understand the mentality of an oppressor and is thus your best weapon to end the oppression.

While it is true that men also seek to benefit from the movement because they too go through harassment and pressures of masculinity, their welfare is a welcome outcome of the movement and not its principal aim.

The claim that men would overtake the platform for expression of female issues is nothing but paranoia because the benefits of acceptance of the role of men in feminism far outweigh the arguments for the rejection of their part.