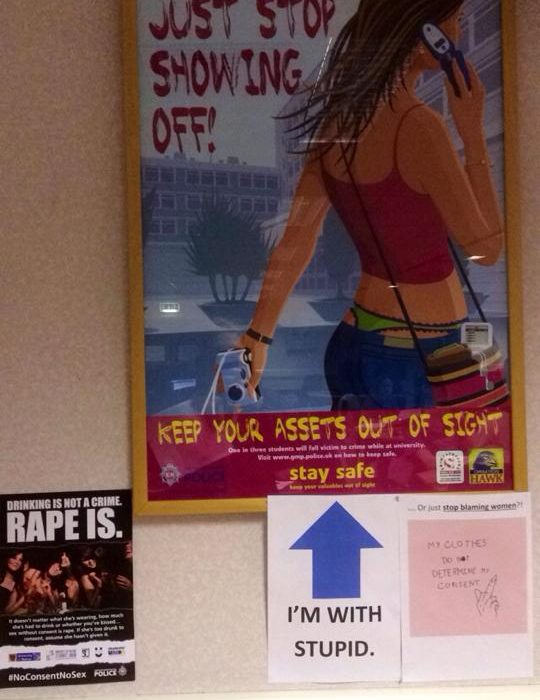 A Greater Manchester Police poster has caused controversy across campus. The poster has been present on the University campus since 2007, but last week many students took to social media to condemn its ‘victim blaming’ content and existence on the university campus.

Found in the Kilburn building, the poster depicts a girl walking around campus with her thong showing above her jeans, along with having her Motorola flip phone, camera and iPhone visible.

This image is accompanied with the words ‘just stop showing off’ and ‘keep your assets out of sight’. The poster aimed to highlight that “one in three students will fall victim to crime at university,” however there has been much controversy on the way they chose to present this.

This all emerged the day that Jess Lishak, the Students’ Union Women’s Officer, received the anti-rape posters which she has been working on in collaboration with Greater Manchester Police.  These posters are to go up across campus and around student areas.

The new posters read ‘Drinking is not a crime. Rape is’, and outline that it “doesn’t matter what she’s wearing, how much she’s had to drink or whether you’ve kissed… sex without consent is rape.”

On Thursday Jess put up one of these new ‘anti-rape’ posters next to the old one in the Kilburn building, posting on Facebook that there was “quite a stark contrast between two Greater Manchester Police posters”.

Jess, in response to the poster found in the Kilburn building, wrote a letter to University management, with signatures from many students, demanding that it be “taken down and replaced with a positive message against victim-blaming and sexual harassment”.

This all comes just weeks after many criticised Greater Manchester Police of ‘victim blaming’ in their response to the rape of a girl in Fallowfield. The police called for students to pre-book taxis, rather than walking home alone.

In a statement for The Mancunion last week, Jess highlighted that sexual assaults don’t “happen because women didn’t get pre-booked taxis, they happened because men decided to rape or sexually assault them”.

Greater Manchester Police responded to this controversy with a statement to The Mancunion. “This poster was produced in 2007 by GMP as part of a campaign to tackle robberies being committed against students.

“It has nothing to do with a publicity campaign on rape. The strapline ‘Keep your assets out of sight’ was simply a reminder to students not to flaunt valuables such as mobile phones, iPods and cameras.

“The poster is no longer printed or distributed, and it is seven years since they were last sent out. The artwork was approved by the head of PR at the time, and this particular style was chosen as it was thought it would appeal to students and get their attention. It is worth noting that we received no negative feedback at the time these were produced.”

However, the university, when asked for comments on the posters’ presence on campus suggested that the poster was originally put up in the Kilburn building without university permission.

“A poster that formed part of an anti-crime initiative by Greater Manchester Police in 2007 was placed on a wall in the Kilburn Building without the knowledge or consent of the university. The posters were not displayed on campus at the time of the initial campaign and this single poster, put up by persons unknown, has now been removed.”