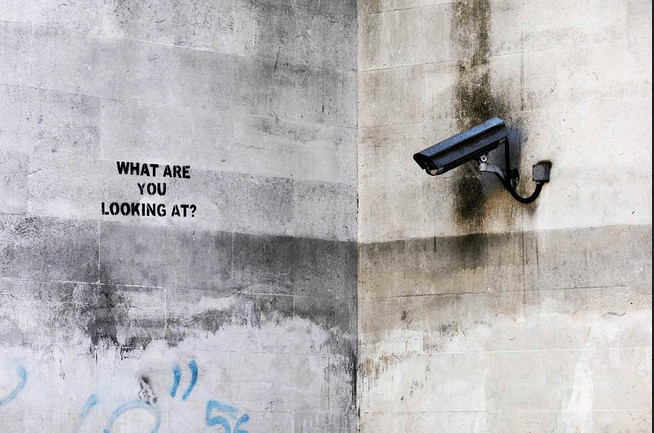 As the most watched nation in the world—the one with the highest ratio of cameras to people, British streets are lined with CCTV cameras. In fact, our city centre in Manchester has around 51600. In comparison, London has about 4.9 million in total—at a total cost of half a billion pounds. One cannot deny the unsettling feeling that the UK is becoming more similar to a totalitarian dystopia.

This feeling, and reality, as a matter of fact, of being watched is often associated with the term Big Brother. Most students are aware that the term was first coined in George Orwell’s 1984, yet many still are not aware of the dystopian novel, which takes place during a time when people’s actions, feelings, words, and more were controlled by the government—or Big Brother.

1984 brings the reader into a terrifying alternative future Britain—set in London—where cameras are placed in the homes of citizens to watch their every move. For example, the protagonist, Winston Smith, hides from the cameras in a small corner of his house to be able to write down his thoughts and experiences. Along with these cameras and constant surveillance came restrictions on thoughts and feelings.

The language used in Orwell’s masterpiece was called Newspeak. It was a language composed in a way that rid it of words of any emotional attachment, leaving some thoughts unthinkable because they simply could not be put into words.

Moreover, the idea of doublethink was also introduced. As defined in the novel, doublethink is when one holds two contradictory ideas in their head and believing them both simultaneously—like telling a lie but believing it completely at the exact same time.

While at first these ideas seem completely radical to Orwell’s imagined society, the ideas were all rooted in the fact that the government watched the citizen’s each and every move. This abundance of surveillance, or more specifically, the fear of getting caught, is what fed the concepts of groupthink and Newspeak. Bit by bit, being watched evolved from a security measure to being a fertile ground on which the government created a terrified and strictly controlled society.

Of course, one’s natural train of thought would lead them to wonder if these concepts are starting to appear in our modern world. Undoubtedly, and by its nature, mass communication has been a great tool in spreading certain ways of thinking—to prefer a product in an advertisement, to hate the antagonist in a movie, and so on.

This is often done using certain words or phrases that slowly infuse into our unconsciousness. Realistically, introducing new ideas must be very subtle. For instance, Sainsbury’s recent Christmas ad seems to embody a sentiment that describes the true meaning of the holidays. Yet, upon closer inspection, that the advertisement beautifies one of the most terrible events that mankind has ever witnessed, The Great War.

The thought is coated with an atmosphere of joy and happiness, and thus effectively delivers a message: the gruesome loss of millions of lives of young men was, sometimes, a rather joyful endeavour.

This is only one of many examples of how successful the media can be at delivering subtle message to unsuspecting watchers; watchers that may morally have one view on an event, but yet somehow subconsciously also hold a completely opposing one—our media’s depictions of race, lower classes or the poor are poignant examples.

More importantly, it all started with surveillance, and the issue is escalating to create our very own version of doublethink.

Another problem of surveillance that has been highlighted in dystopian fiction is that it leads to a large dependency on technology. As mentioned above, about half a billion pounds have been spent on cameras in the UK. That same amount of money could have been used to employ an entire police force in a town. Instead, the money is put into technology rather than in human ability, furthering the idea of technology as superior to human talents and abilities.

In the movie GATTACA, we are introduced to a world where parents can control their children’s genes in order to create the perfect child. In this setting, the characters’ DNA are tested on a daily basis not only to confirm their identity, but also to see if they qualify for doing different things. Again, this sounds extreme but is actually quite realistic.

With growth in stem cell research, mankind is hurdling faster onto possibilities of enhancing the normal human of today. For example, there is an increasing reliance on genetic modification in agriculture to yield more meat.

Slowly, but surely, we are relying more and more on technology than on nature. While of course this comes with great advances in medicine or science and with a chance at fighting famine, there is an alternative side of the coin; the combination of surveillance and human control on genetics leaves a group of people marginally stronger and more powerful than the rest. As often said, power corrupts, and absolute power corrupts absolutely—leaving this power in the hands of mere humans may just turn our modern world into a not-so-fictitious dystopia.

Many may argue that CCTV cameras help prevent crime in a way that no policeman ever could, or that they have saved many lives. Undoubtedly, they must have benefits, but society must determine whether or not these benefits outweigh the possibility of the possibility of an Orwellian Big Brother state.

With the spread of dependency on mass communication, it is definitely easier to spread a message or an idea. Moreover, this gives great power to certain people, who may or may not use it in our best interest. Slowly, technology is shaping a new world—and who knows what it holds.