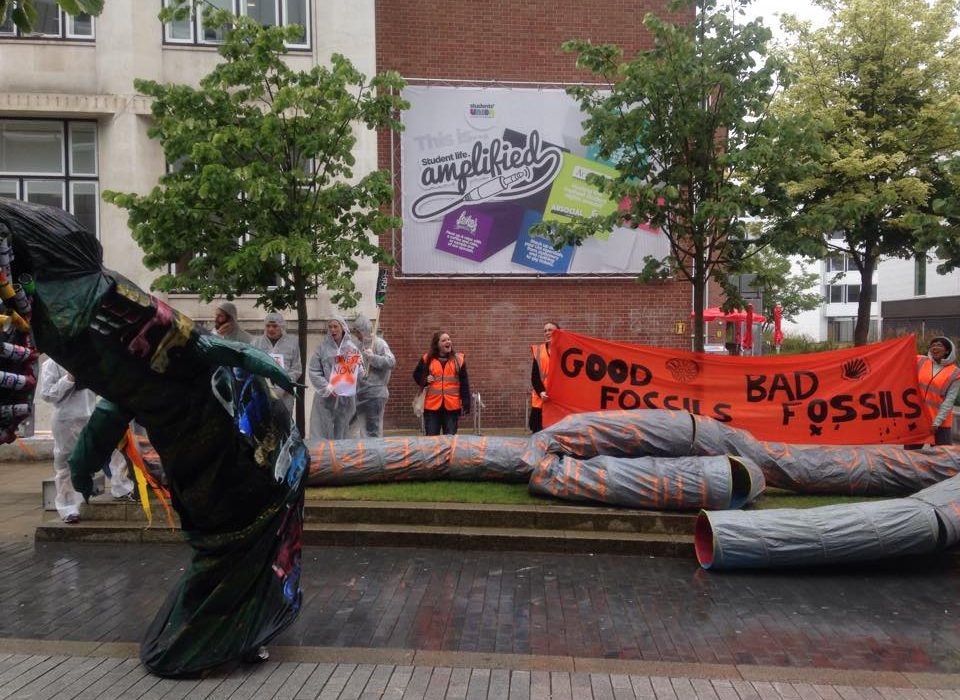 More than a dozen protesters from the Manchester Fossil Free campaign held a protest outside the Learning Commons in opposition to the University of Manchester’s continued financial stake in fossil fuels. This comes in the run-up to a crucial meeting on Wednesday the 8th of July when their petition will be presented to the University’s Board of Governors.

The group of students braved the summer rain on Monday as part of their attempt to highlight alleged ‘contradictions’ on the part of the University. The protest included a reworking of Queen hit ‘We Will Rock You’ to ‘We Will Divest’; a model fuel pipeline; and a student in a dinosaur costume named ‘Gasasaurus’. The group also unveiled a banner with the slogan ‘Good Fossils/Bad Fossils’ emblazoned on it, which included the logo of Royal Dutch Shell.

Naomi, a protester from the group, told The Mancunion: “We’ve written a report and submitted it to the Board of Governors, who are having a meeting on Wednesday to decide [whether to divest].

“It’s an exciting time for us, and we hope that they will make a really positive choice and become a leading institution on this issue.”

The group denied that the protest was deliberately organised to coincide with graduation, with one member saying: “We didn’t have an option to avoid [graduations] between now and the meeting on Wednesday. There’d be absolutely no point disrupting graduation as that would only adversely affect students, and that’s not our aim. We’re just trying to get our message across to management that we want them to divest from the fossil fuel industry.”

When asked what plans the group had in store if Wednesday’s meeting of governors did not result in significant divestment from fossil fuels, the protestors were coy, but one added: “We’ve got lots of plans for escalatory tactics. I don’t want to let too much out, but let’s say open days may get more tricky for the university. We’ve only just had an occupation, but I’m sure there’s a possibility of another one.”

This latest instance of student activism comes after the week-long occupation of the Harold Hankins building in May by a group calling itself Occupy Manchester University, which included several of the members protesting on Monday.

The Fossil Free Manchester campaign—set up in September 2014—claims to have over 1500 signatories to their petition that calls on the university to “abandon an industry with a business model which is so fundamentally at odds with a safe climate.”

Joel Smith, Activities and Development Officer at the Students’ Union and member of Fossil Free Manchester, was also at the protest and told The Mancunion that the Union fully supported the campaign and Monday’s demonstration. Additionally, he was hopeful that a final decision would be reached before the United Nations Climate Change Conference in Paris in November, though made it clear that those involved in the campaign are “prepared for all outcomes.”

Smith also said that a member of academic staff was concerned with the ‘Good Fossils/Bad Fossils’ message, but is adamant that, “we don’t want it to unfairly impact on the palaeontological research of the University and would strongly encourage the university to get more fossils (but less fossil fuel investment!)”

A university spokesperson said: “The university has a Socially Responsible Investment Policy, which is a public document available on our website. The university’s investment portfolio is managed by one of the world’s leading asset management firms, and is reviewed annually against this investment policy.

“The terms of the policy were agreed by the university’s Finance Committee and by the Board of Governors, which both have Students’ Union representation. We do not hold any direct shareholdings, so any influence is brought to bear purely by our fund managers, and because they work on behalf of a number of institutions, they can bring much greater influence than a single organisation.”

Earlier this year, The Mancunion revealed that the extent of the university’s holdings in fossil fuel companies, including petroleum giants BP and Royal Dutch Shell, totalled £40 million.

The full list of Fossil Free Manchester’s demands can be found at http://bit.ly/fossilfreemcr.