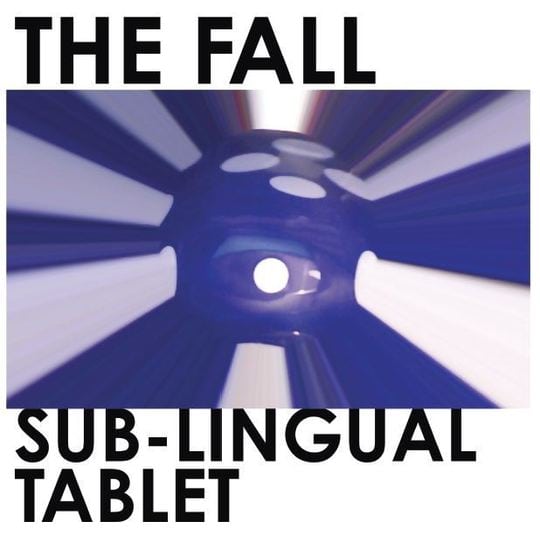 The Fall returned this month with their 31st studio album, Sub-Lingual Tablet. Headed by the ever-present, enigmatic force of nature that is Mark E. Smith, Wikipedia count a total of 66 different members of The Fall since they formed in North Manchester in 1976. However, the current line-up (including Smith’s wife, Elena Poulou) has been together since 2006, and they have found a creative groove in recent years.

Although still characterised by repetition and Smith’s cryptic, orated lyrics, there’s no nostalgia present in their latest output. As with all Fall albums, Sub-Lingual Tablet is a statement that stands on its own. This is one of the fundamental attractions of The Fall, and the reason they maintain a fan base of unsurpassable loyalty – it’s a record that’s innovative and captivating throughout.

The album has a heavy, rhythmic feel to it, with a bassline that travels better through floorboards than air (as anyone who’s been to one of their recent tour dates would vouch for). And given highlights such as ‘First One Today’ and ‘Auto Chip 2014-2015’, it is difficult to argue with Mark E. Smith’s recent declaration: “our rhythm section is the best in music”.

Smith’s Nietzschean sense of humour pervades the hilarious opener ‘Venice with the Girls’, in which he rambles out of tune for the most part. The odd, largely digital ‘Dedication Not Medication’ is apparently dedicated to 1960s German cyclist Dieter Wiedemann (who risked his life to pursue a cycling career on both sides of the Iron Curtain). “Pierce Brosnan, how dare you prescribe sad grief and bed wet pills”, Smith bizarrely declares at the beginning of the track.

‘Auto Chip 2014-2015’ is a 10 minute masterpiece that deserves to stand the test of time in The Fall’s discography. The dense ‘Pledge’ in some ways resembles Aphex Twin’s heftier output. Here, Poulou generates a viscous electronic sound over the rhythm track, and syringes it into the listener’s ears. Beyond this, the reworking of The Stooges’ ‘Cock in My Pocket’, titled ‘Stout Man’, doesn’t add much to the album, and is perhaps the only lull.

A common theme throughout most of their output is The Fall’s use of contemporary sounds, something they’ve done since Brix joined the band in 1983. They adopt various chunks of sound, typical of the music currently being released, and often surpass it in originality, scalding it with Fall DNA. It can be seen as a subversive take on the prevalent musical trends. The sounds and the themes of the lyrics attach Sub-Lingual Tablet to the year 2015, but the structure, rhythm and melody found in most tracks are unique to The Fall. To use John Peel’s forever used quote, The Fall are “always different, they are always the same”.

The beginning of ‘Facebook Troll’, with post-punk rhythm covered in electronic overtones, is in the same ilk as the pulsing, albeit more melodic ‘L.A.’ (from their 8th and most accessible album, This Nation’s Saving Grace). This is interrupted by Smith demanding he be given a Facebook troll in no uncertain terms; 30 seconds of whistling ends the track.

The last track ‘Quit Iphone’ ends with a Smithian comment on urban renewal in Salford Quays: “and I see the citadel of Media City shining bright”. The Fall trump everyone at their own game again.