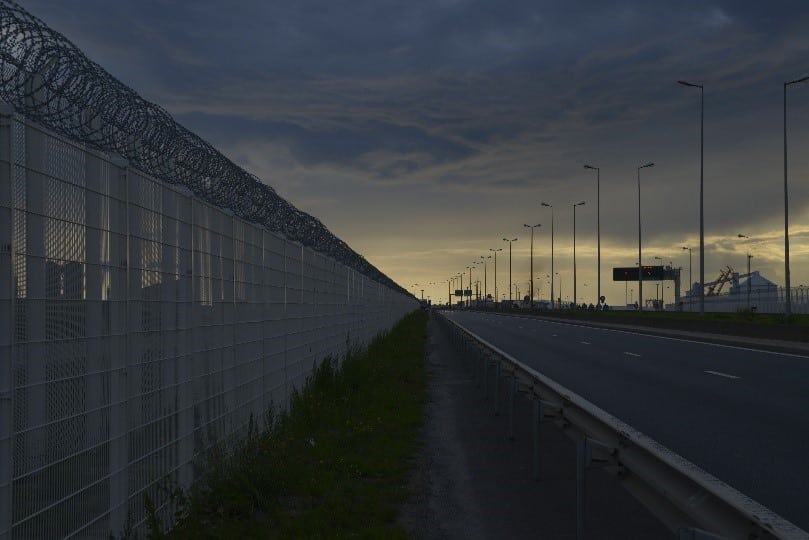 A £7 million fence separates those fleeing persecution and their hope for a better life. Photo: Daniel Saville

Daniel Saville travelled to the refugee camp at Calais to witness first-hand what was happening there. He returned on the 7th of September and has written about what he saw while he was there.

Over the last few weeks hundreds of refugee migrants have spoken out against what they see as an inefficient and cruel set of authorities keeping them trapped in their Calais camp.

Thursday the 3rd of September was the first day of protests outside the Jules Ferry aid distribution centre on the edge of the ‘New Jungle’ camp. Of the 3000 refugee and migrants over 400 gathered to block the entrance of the centre where they go to receive a daily shower and a single meal. This leads to protests, and the scuffles that followed were to demand a resolution to the situation; in the context of new £7 million fences and an increased police presence leading to fewer people getting to the UK.

A man named Yagob stopped me on the road leading from the basic school to the Jules Ferry centre on the Sudanese side of the camp. He invited me to what he referred to as the “big protest” that day at 11 but asked me to walk with him to collect their signs at the other end of the camp.

“This is a protest that needs all people to participate and grab attention to our situation. We need to feel human,” he told me. He led me to the caravan painted with slogans and notices by activists. This is where large signs painted with emotive images of refugees scaling fences and posters of slogans are collected and carried outside the entrance to the centre.

Slowly, a crowd built and a large group of Afghan men sat in front of the metal gate. Others joined them but some migrants did not seem pleased with this action and try to push through to the entrance, followed by shouts of expletives and booing from a large circle of protestors follow.

Yacob points me in the direction of another Sudanese man sitting just outside the circle of protestors. This man was Habib (for the safety of his family, he asked that his name be changed), keen to explain what the origins of the protest were.

“People have been here two or three months without any documentation from France; some of them have no documents,” he said. “A few people want to go to England and, under these conditions, the English government must take action for those who want to go. For example, this camp includes over 2000 people but maybe only 500 want to go to England.”

This is a typical of requests for actions, people mention how long it takes to get out of the camp. People can be stranded here for over eight months—waiting for papers from the French government or now because of the tighter security imposed preventing crossings to the UK.

I asked Yacob if people here thought the protest would make a difference or if it was just the beginning. “In [the] future it will but right now there will not be a solution. Most of these people are sending a message that they need help and want to get to the UK.”

The tone of the day was not one of optimism but of desperation to remind the wider world that while thousands will be rescued from the Turkish/Syrian border, those left in Calais remain in an increasingly difficult situation. As migrants tried to leave the protest, an argument broke out. One man was grabbed and pushed against a parked minivan then surrounded by a crowd chanting and pushing. NGO staff moved quickly, hustling the target into the van and driving him off, presumably for his own safety.

Almost two hours after the protest had begun, it began to slowly dissipate. Iranians, Afghans, Sudanese and the other groups of migrants began to drift back to their sections of camp, ready to return that evening and again the next day.

Later I ask Salim, an Algerian man, if he thought the protest was sustainable. “No, people are tired here, no food, no money. If you want to be ready for fighting you have to have more guns and an army. We spend all night trying to get on a train so we are too tired.”

It seems, however, that desperation is rising and Salim feels that the security of the camp could get worse as a result. “I’m scared that Al-Qaeda or this bloody Daesh [Islamic State] come here and a make a bomb or something, it would be finished here for everybody. No one would get on a train anymore.”

It does not seem likely that a terrorist organisation would infiltrate a camp filled with people fleeing just that, religiously motivated terrorism, but at a time when the world’s attention is focused on the migrant crisis, it should be noted that the refugees in Calais are aware of this and that the increased security measures mean that they are less likely to reach the UK than ever before.

The Jungle camp can be thought of as a conveyor belt of migration. New migrants arrive, and the more experienced usually leave for the UK or apply for asylum in France. However, as fewer and fewer people are making it through to the ferry terminal, or are kept from boarding a London bound train by fences, the camp swells in population—now up to 5000, according to the BBC. In deteriorating conditions and reducing levels of hope it’s easy to see why tensions rise.

This protest was their roll of the dice to swing public opinion their way. As the camp becomes increasingly crowded, people become increasingly desperate, and if peaceful protest fails some believe that violence towards authorities is becoming increasingly likely.