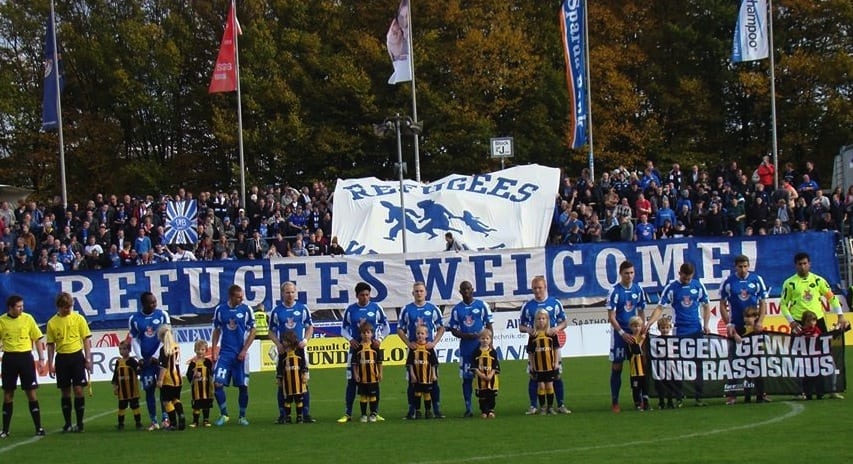 Football is often used as an escape from everyday life, as we watch or play to empty our minds—but football in the last couple of weeks has utilised its reach and power to impact the world and spread an important message. While various governments look at how, and even if, they should help Syrian refugees, football rose up and simplified the situation to say “these people need our help!”

A proposal put forward by FC Porto, and backed by the rest of the UEFA Champions League teams, has been put into action by UEFA. Each team’s first home match of the Champions League will result in €1 of each ticket sold going to help in the refugee crisis. This movement took the internet by storm as FC Porto tweeted their initial proposal and German side FC Schalke tweeted back the Portuguese team; “Great idea @FCPorto! #Schalke are in—let’s play for the migrants! #Standup #SO4.” These were the first two teams to sign up, and now every team in the competition has done.

Considering that the attendance for Real Madrid’s Champions League opener against Shakhtar Donetsk was 66,389, this is a great way to raise money for the crisis, and it doesn’t stop here. PSG and Real Madrid are two of many European teams who then went on, of their own volition, to give money to the crisis, both donating €1,000,000 in this instance.

The Premier League showed its support for the refugee crisis last week too, as the ‘Get on with the Game’ flag, which is usually erected before games, was swapped for a ‘Save the Children’ flag. This will continue for one more week before being swapped back. Further support includes action from Chelsea, who will auction off their match-day shirts from their game with Maccabi Tel-Aviv; Arsenal, who have donated £1 from each ticket they sold against Stoke; and Everton, who fielded a team of Syrian refugee children as their mascots against Chelsea last weekend.

Despite these great acts by Premier League sides, it seems to be German football teams who are making the greatest contributions, which may come as no surprise, since the German government has been so forthcoming about the crisis. Bundesliga champions Bayern Munich have created training camps for Syrian refugees, where they can learn German, have meals and use the football equipment that they have been provided. They also invited Syrian refugees to stand alongside their usual German match day mascots last weekend against Augsburg as a “symbol of integration of refugees.” Borussia Dortmund have also been showing their support—they invited 220 refugees to watch their 7-2 Europa League demolition of Norwegian team, Odds Ballklubb.

The German Football Association (DFB) have been very active in their help for refugees. Last week they lengthened their migrant-aid initiative until 2019. Furthermore, in order to integrate migrants into smaller communities, the DFB created “1-0 for a welcome,” which offers €500 to any German amateur club that provides footballing opportunities for refugees.

It is in the eighth tier of German football, though, where you will find one of the greatest footballing acts for refugees. A local Christian refugee aid organisation in Egelsbach has joined forces with SG Egelsbach to set up their very own football club for refugees—Refugees United—in a fantastic act of kindness, to integrate refugees into the community. Their opening match against another local side was introduced by the DFB president Wolfgang Niersbach, who described the team’s creation as “exactly what we had in mind”.

Teams from all countries and from all tiers of football, just like SG Egelsbach, have shown their support for refugees in the last few weeks. FC United of Manchester, Charlton Athletic, Clapton FC, Middlesbrough and Arsenal are a few of many in England who held aloft their “Refugees Welcome” banners at games last week, coinciding with the National Day of Action. The message even spreads all the way to Australia, with North Melbourne Kangaroos having displayed a “NMFC Welcomes Refugees” banner on the pitch before their game last week.

Despite these fantastic strives towards helping and integrating refugees, two notable banners have been seen at matches of two Champions League teams that convey the complete opposite message. Maccabi Tel-Aviv’s fans held aloft a “Refugees not Welcome” banner before their game against Kiryat Shmona, and Lyon fans did the same last Saturday in their 0-0 draw with Lille. Both teams will still be giving €1 to the crisis for each ticket they sell for their first Champions League home match, along with every other Champions League team. These minority groups of fans stand rather alone in their anti-refugee stance.

German Chancellor Angela Merkel this month hammered home the importance of Europe’s need to tackle the current refugee crisis. In the worst refugee crisis since the Second World War, Merkel urged Europe to act together, stating that “if Europe fails on the question of refugees, its close connection with universal civil rights will be destroyed.”

Regardless of Merkel’s cries for help, imitated by politicians and people alike, the British government are still potting below par. David Cameron has announced that Britain will take up to 20,000 refugees in the next five years, whereas Germany will take in 25 times that amount in one year alone, through their willingness to take in 500,000 each year.

In spite of the couple of anomalous examples of fans not welcoming refugees, the world of European football is doing what the British, and other, governments are struggling to do: Prioritising the refugee crisis and meeting simple social implications. Despite any bad press football fans may usually get for their antics, clubs and fans have come together in this instance to fight this crisis head on. When Merkel addressed Europe to come together and act, Europe listened, but it was Europe’s football.