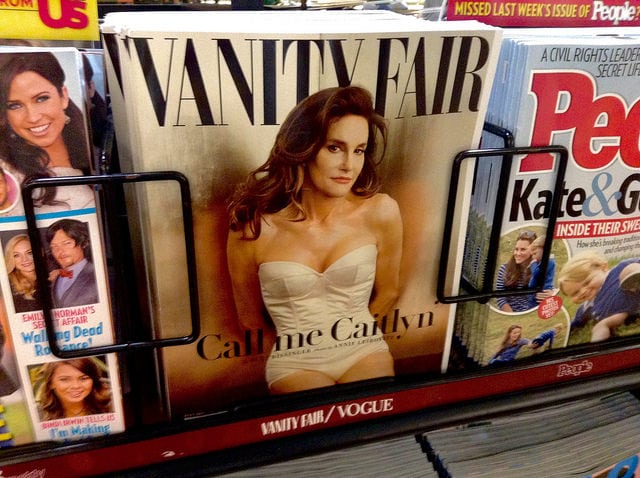 To put it simply, the transgender community are breaking strict traditional rules when it comes to gender and sexuality, and since the patriarchy’s very existence depends on everyone’s compliance, those who break the rules are a threat and usually silenced. That is, until now.

The trans movement has been slowly growing for some years, a prominent moment being black trans actress Laverne Cox gracing the cover of esteemed US magazine TIME in 2014, with a heading marking it as the ‘Transgender Tipping Point’. This, though, is somewhat small in comparison to the impact of Caitlyn Jenner, whose transition from US Olympic champion, reality TV dad and trash magazine punching bag to powerful female icon has catapulted transgender issues and stories into the mainstream.

The mass media interest in transgender issues can be baffling to someone with little previous exposure to trans identities. More confusing still is media outlets regarding transgender people as a completely new phenomenon, when equally high-profile gender reassignment surgeries were happening 60 years ago.

This though, is not just as some have suggested, a hot topic trend being pushed by a trendy celebrity endorsement, but a monumental shift in society. It is giving a voice to a previously forgotten, abused group, and encouraging them to express it. In short, the coverage only feels excessive in comparison to the nothing that came before.

I have little sympathy for those who complain that their media exposure is dominated by stories from those in the LGBT community, arguing that trans is not, as the media would apparently have them believe, a common mainstream phenomena. But after analysing the mass media’s general approach to the trans movement it is clear why people may see this civil rights movement as trivial.

Viral media picked up on the growing acceptance of this next frontier of civil rights, coming out with a series of rather vapid stories that stray away from the goals of the movement and reducing it to just a mere celebrity phase. I have heard more on Caitlyn Jenner’s wardrobe than I have about her efforts to reach out to the trans community, which just clarifies how one-dimensional this phenomena is in danger of being.

While the tabloid establishment praises Jenner’s glamourised appearance and manner, this coverage diverts attention from more serious issues facing those who identify as transgender. The tabloid media has almost completely ignored the enormous spike in murders of US transwomen of colour, and how transphobic hate crimes are rising in the UK. The sidelining of such issues highlights the media’s avoidance when it comes to addressing real issues faced by the trans community.

The current media surge is ignoring a whole spectrum of transgender people, trans men for example, who have rarely been invited into the discussion. This leads on the following troubling issue with the tackling of this community, the degrading obsession with trans-bodies. As with stories concerning Caitlyn Jenner’s ability to apply makeup, considerable amounts of the journalism concerning trans men are fluff pieces. Articles about those who conform to conventional standards of male beauty, with titles like “Look at this transman, he’s so hot” and “Insanely hot men you will not believe are trans”. These, like much of the appearance-centric media, provide unrealistic expectations for transmen, and more importantly prevent them from being seen as multifaceted human beings.

Ultimately with her perfectly feminised white face that has the widest appeal to the cisgender public, as well as celebrity connections, Caitlyn Jenner is really the most myopic view of transgender people that has been constructed. Drawing back to the disgruntled attitude of some members of the public when it comes to the amount coverage of trans issues in the media, the ‘Call Me Caitlyn’ story plays a huge role.

For as exciting as Jenner’s story has been in the past few months, it is inevitable that people will—as some already are—grow tired of her, as most have with the whole Kardashian clan. This presents an issue, as most of the transgender acceptance in the media has been funnelled through Jenner, the burnout of her moment may cause a burnout on transgender issues on the whole.

Is someone who is sick of hearing about Jenner’s experience going to be prepared to treat their trans co-worker with respect and kindness? The fear is no, and this is the real danger caused by the media’s perspective, encouraging people to form their entire opinion on a community based on one high profile individual.

There are of course other elements of the media other than the tabloids embracing the transgender movement—TV shows Transparent, I am Jazz and the BBC’s own Boy Meets Girl, all provide fresher approaches to the community, and I would recommend them wholeheartedly.

Ultimately there is no denying that this development is a momentous moment for civil rights and human acceptance. It is disheartening, then, that elements of the mainstream media refuse to approach it as such, and in turn threaten equality and understanding for the transgender community.