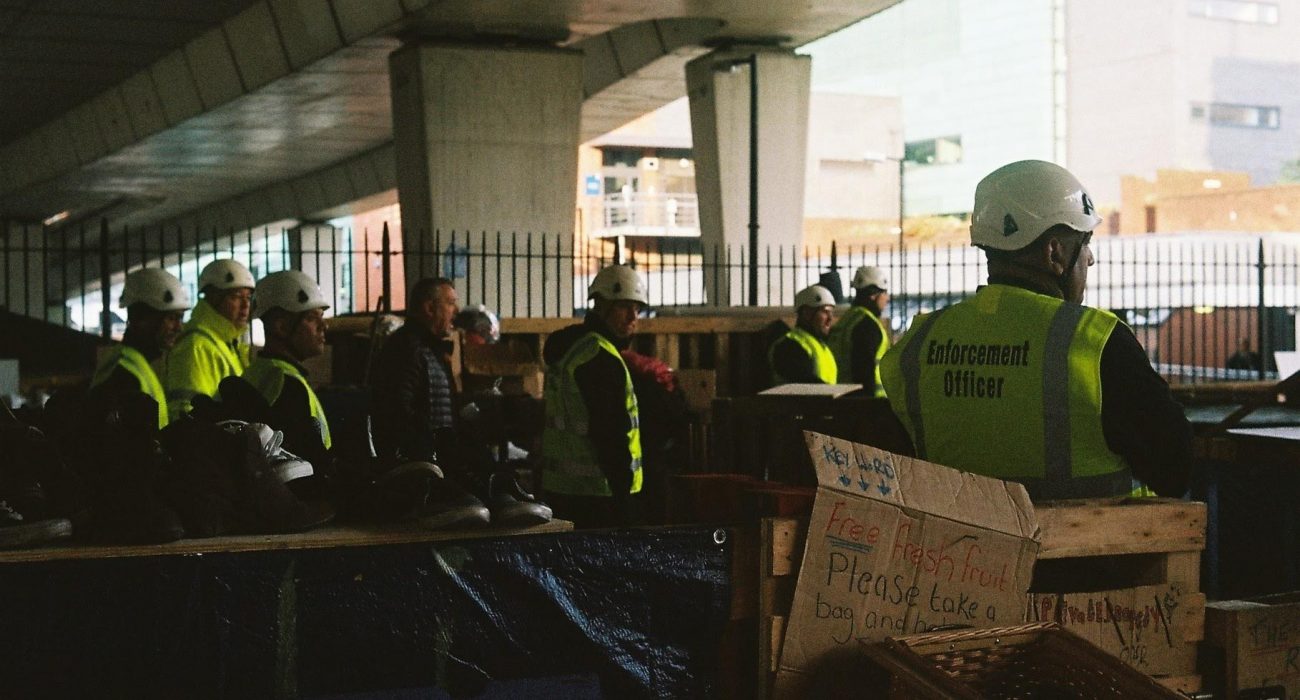 Bailiffs move in on The Ark

Residents of ‘The Ark’ homeless shelter underneath Mancunian Way have been evicted for a second time after Manchester Metropolitan University (MMU) were granted a possession order, following over a month of legal wrangling. Bailiffs from the High Court were sent in at 7:30am on Tuesday the 20th of October to dismantle the camp and remove the occupants from land to which the university claims ownership.

The Mancunion has closely followed developments with the Ark since a judge granted MMU permission to remove the make-shift shelter on the 18th September, resulting in a female activist being hospitalised.

Founders and supporters of The Ark claim that it had represented a safe space for people to come together in a “self-serving community” where people protected one another from the precariousness and dangers of sleeping rough, providing some measure of security and comfort.

MMU claim an unlawful settlement was established on their land and have sought to remove the camp through legal channels. However, in early October legal action against the homeless camp was then thrown out, Judge Allan Gore branding it as “misconceived and inappropriate.”

The case has been reviewed again and subsequently the council and university have succeeded in clearing the area—after receiving a possession order—in move activists are calling “social cleansing.”

In less than an hour early on Tuesday morning, the temporary homes of around a dozen people—tents, barriers and cardboard signs displaying messages of protest—were taken down and reportedly thrown into a waste-disposal van.

This fresh round of evictions occurred on the opposite side of Oxford Road from the original settlement which was forcibly removed the day before MMU Freshers’ Week. The university has come under strong criticism from students who have stood in solidarity with the homeless and routinely protested the “persecution” of Manchester’s vulnerable population.

The basis of the university and council’s action against The Ark has been that it breaches an injunction forbidding the erection of tents as protest against the issue of homelessness and occupiers were threatened with two years in prison.

Student Action in Solidarity with the Homeless (SASH) has been campaigning regularly over the past few weeks and following Tuesday’s eviction they penned an open letter to university management to rethink their stance on the homeless issue.

In recent developments, MMU management summoned leading student activists to a meeting on Thursday afternoon to discuss the issue, during which the university stated they have “acted morally and responsibly” with regard to The Ark. In the same meeting, university bosses have said they are willing to take into consideration an “alternative homeless shelter” which is called for by SASH and the open letter they have written.

Though nothing concrete has been promised, campaigners will take hope from the opening of dialogue with the university, who until now have shown no sign of negotiation and spoken only with force. In spite of this, The Ark founder Ryan Mcphee, speaking after Tuesday’s eviction, said the situation for Manchester’s homeless is “dire” and that “people can’t be allowed to live like this.”