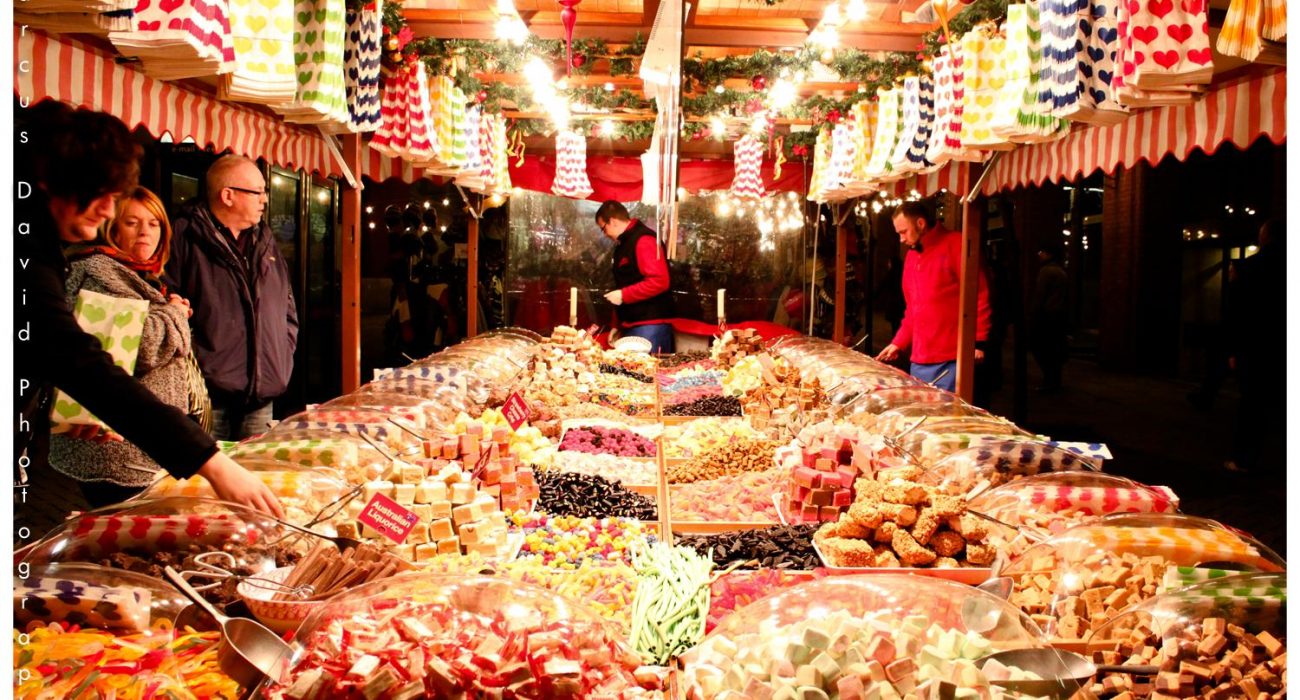 CHEESE:
The highlight of the Christmas markets, for me, was the expansive row of wonderful cheese I was confronted with when I entered the centre of Albert Square. Seemingly going on for miles were plates and plates of small tester cubes to taste. Here, you can find cheeses in a variety of flavours and maturity. Classic cheeses such as 24-month-old cheese and cheese flavoured with truffle sit alongside new favourites such as red or green pesto flavour and unconventional choices, too, such as peach and coconut flavoured cheese. I wouldn’t say that the latter two would be my choice to buy and take home, but being able to try out these unusual combinations adds to the excitement of the outing. The pesto cheeses were outstanding—I would highly recommend buying some to make some sumptuous cheese on toast with a twist.

STRUDEL:
The strudel was everything you would want it to be. After deliberating for a while, about which flavours to choose, and settling on a cherry strudel, we were not disappointed when it arrived. We were handed a huge portion (definitely getting good value for money here) which my friend and I had struggled to finish between the two of us. Beneath the crisp pastry was a perfectly sticky and sweet cherry compote, all covered in a generous scoop of warm and creamy vanilla custard. The beautiful, wintery surroundings of the market were only made to be more magical by being able to enjoy it whilst sitting and eating the ultimate comforting pudding.

MULLED WINE:
Nothing says Christmas quite like a steaming mug of spiced wine.
The market charges a reasonable four pounds for a delicious cup of mulled wine. There is a two pound deposit fee for the festive red mug, which you can choose to keep. Mulled wine is a delicious winter drink best served hot or warm and is traditionally made with red wine and various mulling spices. There are lots of places to pick up a mug on the go, or alternatively, you can enjoy a serving in one of the huts and soak up the merry atmosphere around you. If you are heading down to the Christmas market, be sure to not miss out on a mug of mulled wine to get you in the festive spirit. The mulled wine on offer encapsulates everything that one should be—sweet and strong.

SAUSAGE ROLLS:
Porkys Of Yarm (The Pig & Barrel) sell really wonderful pig rolls. With a whole hog out front and a wood panelled seating area in the back, The Pig & Barrel is a good spot. The pork itself is a good mix of meat and crisp skin, the slight dryness is immediately remedied by the rich stuffing and self-serviced apple sauce. For £5.00, and the amount you get, this is one of the best value items at the market.

Great North Pie Co. stock easily one of the best things available at the market. The Great North Pie Co. are artisan pie makers based in Wilmslow. Try the award-winning (the British Pie Awards are very real) Goosnargh chicken, mushroom, English mustard and tarragon pie with gravy or one of their equally delicious vegetarian options, white Cheshire cheese, beetroot, cranberry and orange at £6.50. The fillings taste like the best stew you’ve never had and the all butter crust is sublime.

BRATWURST
At the Bavarian Swing Grill:

A German swing grill is an amazing thing. Visually, it’s impressive and you get a good smoky flavour by cooking the wurst slowly over glowing coals. The stall also has really good names. Try the Riesen Krakauer Spicy—which isn’t too spicy at all—or the standard Super Bratwurst Plain in a roll for £4.50.

At the Lakeland Picnic Company:

There is a strong German theme throughout the market. My friend kindly informed me that Christmas is “really big over there.” With said theme comes a lot frankfurters—though it’s worth giving the British sausage contingent a taste. Try the Cumberland sausage with fried onions and a homemade carrot carrot chutney in a bun at £5.50. A nice bonus to add, with every Cumberland Sausage sold, 50p goes towards the Wood Street Mission Children’s Charity.

Known in Belgium and the Netherlands as pannekoek, these pancakes may be small but are by no means light. Cooked in front of you in little hot pockets, the sweet batter forms into a thick, rich bite that you’ll definitely want to sink your sweet tooth into. A choice of sauces include nutella, a range of treacle and jam generously smothered on top, accompanied with a dusting of icing sugar to make for an aptly snowy finish. If you’re feeling slightly more adventurous, why not try the ‘appelstroop’ topping—an unspiced Dutch variety of apple butter!

One of the less well known stalls at the christmas markets but certainly one not to be missed, the Alsatian (a region of France) and South German stand of ‘Flammkuchen’. A pleasant change from the meaty sausages and goulash hot pots on offer, the smell of the doughy delight wafting from the fired oven will surely entice you over. The traditional dish consisting of a thin pizza-like base covered with créme fraîche or white cheese, sliced onions and salty bacon lardons make for a deliciously filling bite. You can’t go wrong with the traditional toppings trio—but if you fancy jazzing it up, mushrooms, gruyere cheese or munster cheese can be added.