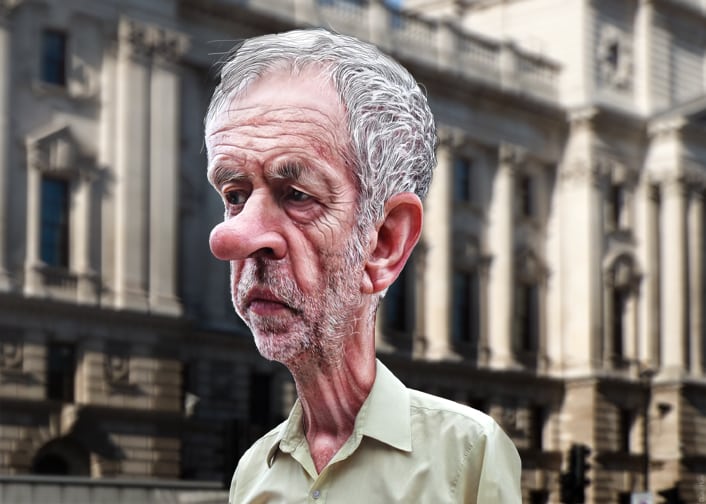 Not since the Ministry of Lord North in 1770-82 and the Whigs traitorous support for rebellious American colonists has Her Majesty’s most loyal opposition been such a nest of treasonous vipers. As I look down the Labour front bench, one can’t help but despair at the complete lack of patriotism that now characterises Corbyn’s Labour party.

The party has become a shadow of its former self. In my grandfather’s day it was a great political party with great aspirations. It represented many people from all walks of life. They filled its ranks with a message of social justice and love for their country. This was everything Labour used to be.

We will begin with Comrade Corbyn’s closest confidant and right-hand man, John McDonnell. McDonnell was once a backbench loony of the Labour party—now he’s Shadow Chancellor. This is a man who, along with many others in the Labour front bench, feel that it is now appropriate to quote Mao Zedong in Parliament; Mao being the man who had killed tens of millions of his countrymen and was up there with the likes of Stalin and Hitler in terms of cruelty. How long will it be until he pulls out a copy of Mein Kampf and justifies it by saying “Hitler’s road building policies did wonders for German unemployment and infrastructure”? Not to mention he would royally screw up our economy. But economics can be dealt with at another time.

As we work our way down the green benches, we come across another dubious individual—Emily Thornberry. This is a woman who is now the Shadow Secretary of State for Defence, yet she doesn’t believe this country is worth defending. She is opposed to the renewal of trident, voted against bombing the Islamic State and accepted tens of thousands pounds of donations from a law firm who have hounded veterans of the Iraq War over spurious legal claims; one claimant had tried to sue a British soldier because he was taken prisoner instead of being shot.

Thornberry continues to accept donations and lied about the military service in an attempt to bolster her appalling credentials. And yes, this is the same Emily Thornberry who mocked a house because it was flying the English flag on a white van parked in their driveway—a testament to the snobbery of the London-centric Labour party.

I will now place my sights squarely in the direction of the generalissimo himself. Yes, that’s right, Jeremy-I-love-manhole-covers-Corbyn. A man who shows just how much he dislikes Britain more and more with each passing day. He has said that there is “parity” between the British army and the IRA—an Irish terrorist organisation that bombed and killed thousands of innocent people. He has shown support for other terrorists like Hamas and Hezbollah by calling them “our friends”. Hezbollah are currently helping to prop up Bashar al-Assad in Syria.

Then of course there is his absolute and unequivocal betrayal of the people of the Falkland Islanders; British citizens who voted overwhelmingly to remain British. Yet Corbyn has said that he wants to find an “accommodation” with Argentina over the Falklands. He believes, that no matter what the Falkland Island’s wishes are, a deal should be struck. Let us not forget how the Islanders suffered the last time Argentina imposed its sovereignty on British citizens. We struck a deal when we accepted the Argentine surrender in 1982.

He is of course opposed to trident and apparently any sort of defence of the realm. He famously said: “Wouldn’t it be wonderful if every politician around the world, instead of taking pride in the size of their armed forces, did what the people of Costa Rica have done and abolished the army”. In essence, he doesn’t want us to defend ourselves or our allies whatever the cost is, to Britain. I doubt he would even object if a Russian T-90 were to roll into Warsaw.

Now we come to the greatest example of his traitorous nature, his republicanism. In 1991 he seconded the Commonwealth of Britain bill brought in by Tony Benn that would have seen the monarchy removed, and Northern Ireland ceded to the Republic of Ireland; looking to override the wishes of the people of Ulster and make his IRA friends happy. It was thankfully defeated because mercifully, he is in the tiny minority. Her Majesty is the nation. She embodies it. She represents it. She defines it. She reigns over it. To be against the Queen is to be against Britain and all its wonderful traditions. It’s something I’m sure Comrade Corbyn is quite at home with.

Now I could go ahead and criticise Dianne Abbot about her racism or her outrageous claims like “Mao did a lot of good for China”, pr the Venezuela-loving Richard Burgon—maybe even Ken Livingstone; who is heading up Labour’s defence review and yet is opposed to the Trident and NATO. He has also hurled insults at a colleague in reference to the gentleman’s struggle with mental illness. Nothing is too low for these people. But of course I have a word limit so I must press on.

This behaviour is not characteristic of all Labour members. The likes of Dan Jarvis, Chuka Umunna, Liz Kendal, and many others, are most certainly on the side of Britain. Yet, one fears that they are going to become increasingly marginalised by Corbyn’s “new politics”.

But fear not comrades, the end is very far from nigh. Thankfully, the British people understand that there is now an enemy within. The latest polling on the top teams of Labour and the Conservatives shows just 16 per cent side with Corbyn’s front bench while 43 per cent put their trust in Conservative party leadership. The future is bright my friends. The land of hope is Tory.