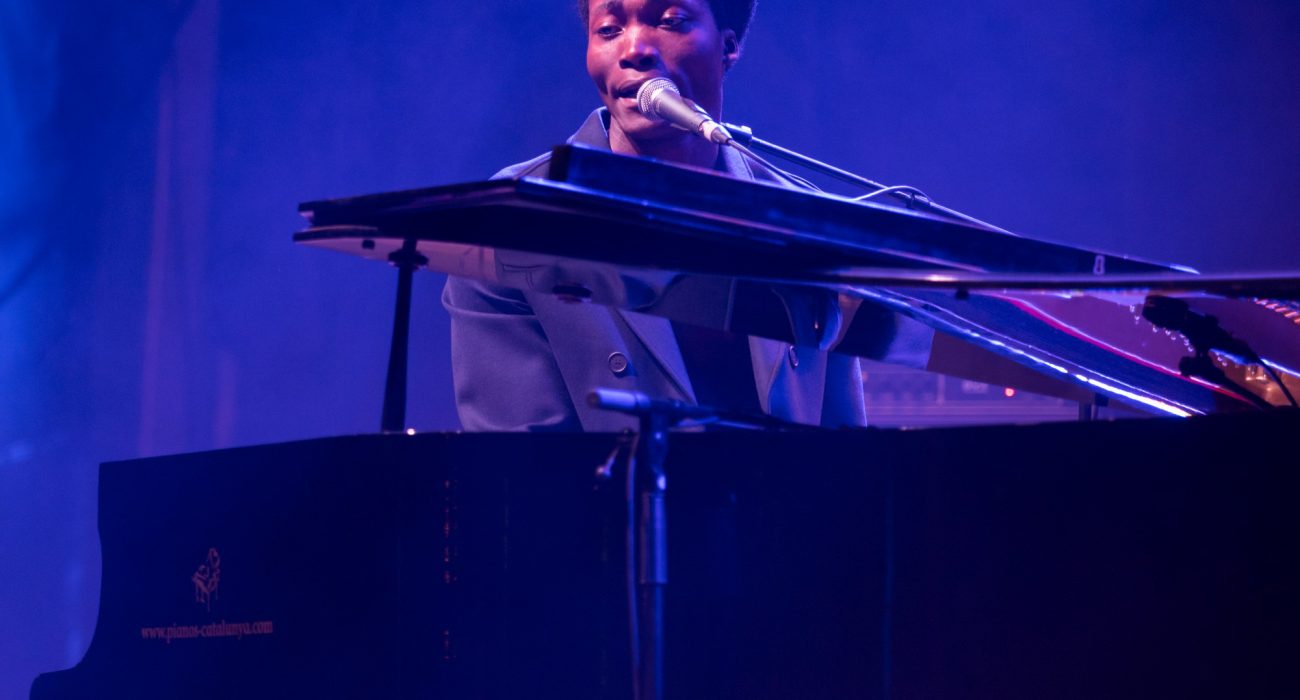 It’s Tuesday evening and we walk through the atmospheric Salford Quays to the Lowry Complex. Once inside, we’re directed through to the theatre and shown to our seats just as the lights dim. The audience is silent as Benjamin Clementine carefully walks onstage to sit on a bar stool in front of a grand piano. Barefoot and dressed in a dark trench coat, he cuts a strange figure. After a short pause Clementine opens with ‘Gone’, the last track on his Mercury award winning album At Least for Now. His relaxed control of the piano provides a suitable accompaniment to his powerful vibrato cries and lyrics bleeding melancholy, and this extends to the rest of the album.

After an enthused applause by the audience, Clementine is joined onstage by Alexis Bossard for ‘Condolence’ and ‘Nemesis’. Bossard’s percussive accompaniment is impressive, lending energy to a performance that, although tight, sometimes lacks diversity in its style.

Overall, this performance is everything that you would expect after At Least for Now. At times intense and atmospheric, at others Clementine’s booming voice paired with Alexis’s tight control of percussion…creates a wonderful energy. Although it is impossible to fault the instrumental performances, there were, surprisingly, times when Clementine’s vocals wavered, particularly on the evening’s performance of his single ‘Cornerstone’, which lacked some of the intensity and urgency of other performances. However, the far greater and more pleasant surprise of the night was drummer Alexis’s controlled yet furiously energetic support of Clementine.

The night ends with an encore of ‘Adios’ and ‘London’, both of which leave the audience stunned by the vocal strength that they allow Clementine to display; and finally, the pair walk offstage to a heavy applause.

By now there has been a wide range of response to Benjamin Clementine’s At Least for Now winning the mercury award, but all revolve around an important question: What should the aim of the Mercury Award be? The official Mercury Prize line is that it is presented to the best album released that year by an act from the UK or Ireland. Of course, a decision like this will be fraught with difficulties. Comparing albums of different genres and styles and even simple differences in opinion and taste are problems that will cause disagreements whatever the nominations.

The other often suggested purpose of the Prize is to raise awareness of talented, yet lesser known, artists. This certainly seems to have been a factor in Mercury wins in the past, since smaller acts take the prize over favourites to win, however this does seem to undermine the integrity of the official line of ‘best album’. If this is to be a factor in the decision, it should be made clear that this is taking place.

Benjamin Clementine’s win this year hints towards the latter purpose of the award. Despite an appearance on Jools Holland and a slightly stronger following in France, he remains a relatively unknown artist who, hopefully, will now deservedly receive wider recognition for his work. It is safe to say that At Least for Now is a great album. Minimal instrumentation and emotive lyrics create an intense album that demands attention throughout.

However, to call it the best British album this year seems a bold move. Whilst a nice listen, it feels a somewhat timid album. It is quite content in setting out a style for itself and sticking to it, without much variation or experimentation. Still, perhaps a Mercury win will afford Clementine the requisite confidence and a platform to produce a more developed second album.

Personally, I feel that the Mercury Prize does not deliver on its promise of the best album of the year. But given the nature of the task, it is not surprising. Instead, it offers a platform for good music to be recognised and shared. So, instead of calling it out on its choices each year, we should ask for a more clear and honest objective of raising awareness of smaller acts and genres that some of the listener-ship have not heard yet. Hopefully this will encourage artists like Benjamin Clementine to continue to create great albums.