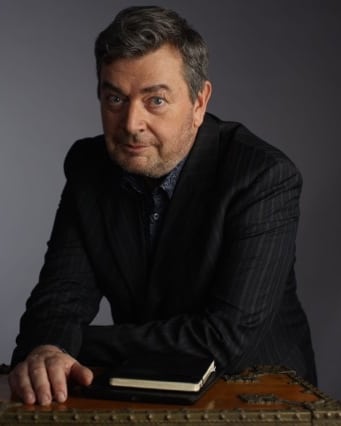 Talk to any writer about their life and their work and, as a rule, you can pre-empt the course the conversation will take. They’ll use your questions to launch a series of rehearsed speeches designed to impress. In ever-intensifying self-congratulatory tones they’ll talk about themselves, their opinions, and at all points emphasise their righteousness. It’s understandable: They are only human, after all. And on the whole, any writer worth their words is a brilliant self-promoter. But sit down with The Times columnist David Aaronovitch and you’re in for something completely different. Very few writers turn the interview back on you.

After two hours of conversation I stumbled down onto the Northern line with my pride shaken. The award-winning journalist had shown the amateur how it’s done. My assortment of questions were derailed from the moment I pressed ‘record’. He led the interview.

My first question, “What was your time like at the University of Manchester?” turned into a no-holds-barred dissection of my dissertation plans. An old history student himself, David seemed to know the literature better than I did, even after months of supposed study. After five minutes arguing over varying interpretations of Indian human rights, I realised my cause was futile and I retreated to the tried and tested evasion tactic that all humanities students know well: blame post-structuralist academics’ complexity.

He nods sympathetically. “I’ve never had time for them myself. As Orwell says in his essay on ‘Politics and the English Language’, when someone is being obscure, usually they have a hidden motive.” Evidently he was too much of a gentleman to comment on my own obscurity. I sighed a breath of relief. The rabbit was out of the headlights. For now, at least.

In the early ’80s David was the President of the National Union of Students in its most left wing days. He was elected as a member of the Eurocommunist bloc—a loose political term for someone who rejected both the West’s material greed as well as the Soviet Union’s reactionary party line. Instead they embraced liberation movements, from anti-racist movements to LGBT and women’s rights movements.

They say that age makes you more conservative and that you approach the world with a more levelled head. Certainly Aaronovitch’s political stance has changed over the years. Writing for Rupert Murdoch, one cannot claim to be a revolutionary but none of the old fire has gone. The man is angry: “I’m still 99 per cent Thomas Paine over Edmund Burke,” he tells me.

David Aaronovitch lives to argue, whether that be with the left or right. Jeremy Corbyn, George Galloway, Peter Hitchens, Mehdi Hasan, Alex Jones or Katie Hopkins—it doesn’t matter, he won’t hold back.

His new book, Party Animals: My Family and Other Communists, describes his hard left upbringing and its effects on his continued political outlook. He’s moved on quite a bit now. He’s one of a series of originally hard-left British writers who shed their purist roots and confronted what they perceived as dogmatism head on. It seems he still holds a real dislike for certain Tory attitudes, though.

“There is a real prejudice amongst Tories at large… a lot of them believe that the less of something there is, the fewer people have it, the better it is. This really goes on the rubric of ‘excellence’: ‘We don’t want all these students doing ‘Mickey Mouse’ courses.

“Of course, you define for yourself what one of these courses are—they’re usually courses which the person themselves didn’t do. Then they’ll say: ‘Wouldn’t we be rather better off if we had less of this?’ It’s a kind of attitude akin to ‘Hasn’t the seaside been ruined by all these people going?’

One episode Aaronovitch claims he’ll never live down is his 1975 appearance on University Challenge. David’s Manchester team answered almost every question with “Trotsky”, “Karl Marx”, “Che Guevara”, or “Lenin” in protest of Oxford and Cambridge’s unfair representation on the show, with their ability to enter as individual colleges. University Challenge “didn’t let the polytechnics on, who were of course our proletarian brothers and sisters in the struggle. It was an elitist institution [an] ideological arm of the state apparatus… We were entitled to take action against it!” Aaronovitch said, describing the incident in a documentary.

“Jeremy Paxman would have been absolutely brutal if we did that today. He would have just cut us off at the knees,” Aaronovitch explained to me. “’What’s that stupid accent for? What this Trotskyist nonsense!’”

He gestures to his baguette—“this was your objective.” He gestures over at my olives—“this is where you are.

“Movements like Eurocommunism said: ‘We’re going to get to the objective, and this is how we’ll do it through this step and then this one’. Now I’m not saying that those steps weren’t unproblematic, but at least they were intellectually serious.”

David Aaronovitch clearly thinks Corbyn would not get to the baguette. “Now Corbynism isn’t intellectually serious. Take some of your Corbyn supporting friends aside and ask them: What do you want for this country? Do you want a new economic system called socialism? Will it be founded on the abolishment of capitalism? In the end they’ll say: ‘I want nice things and I don’t want horrible things’. It’s childlike and frivolous.”

I bite the bullet: “I voted for Corbyn.” David raises his eyebrows. Sensing I had put myself back into the headlights, I quickly add: “But I’m regretting it now.”

Gesticulating wildly with my cutlery, I try to make a joke out of John McDonnell throwing a copy of Mao’s Red Book at George in the House of Commons—“It demonstrates his incompetency, they simply don’t understand political spin!” My fork slips out my hands and clatters onto the floor—as Hampstead’s Café Rouge diners look up irritably.

Aaronovitch pauses for a moment. “Now this is something I’m struggling with. Why have young people voted for him? What would make someone like you, who’s essentially slightly left of centre, vote for an old Trotskyist? If I was to take you through his policies issue by issue, you’d never vote for him.”

I reply with the pro-Corbyn line: “Well I think young people are disillusioned with the old party spin and general way of doing things. He’s put important issues back on the map.”

“How old are you—21?” David retorts. “When were you ‘illusioned’? You haven’t been around long enough. You have the same opinion of Labour politics as Bart Simpson has about geometry.”

Out of surprise I choke on my beef pâté. In between coughs I wince: “Well, he speaks his mind.”

Sharply Aaronovitch replies: “Well his mind’s stupid! He’s never solved a problem in his life.” He stretches out his arms and gapes his jaw, “Corbyn’s a scarecrow, he hasn’t moved politically in about 50 years!”

Renewed with confidence at his comical skit I argue that Corbyn had redefined the parameters of political debate and that he was potentially starting a genuine grassroots movement, citing the hundreds of thousands who had joined Labour since his election.

I believed about half of it but Aaronovitch did not believe any of it, and proceeded to unrelentingly take Corbyn, and my initial support for the man, apart issue by issue—from Diane Abbott, to local councils, to Corbyn’s divorce. From Corbyn’s position on Northern Ireland to the current Ukrainian crisis, the word ‘naivety’ was thrown around more than once.

“Corbyn doesn’t solve problems. He doesn’t know how to. He’s an opposition politician. He essentially, as a friend of mine put it, is a great masturbator. He’s in his room doing his stuff as it operates in his own head.

“Now for some reason all you young people have decided to help him with this—given him a ‘helping hand’ if you will. Mostly it seems that’s because you’ve all invested in him an idea of what needs to happen, which actually has very little to do with him.”

Aaronovitch proceeds to describe his break away from the idealism of his youth and the process of growing up, stating: “Now I don’t actually separate idealism from realism because to do that is to betray them both.”

However, when I ask him who he voted for in the Labour party elections, David replies sheepishly that he had voted for Liz Kendall, who polled just 4.5 per cent of the vote. I smile at the irony. No one can say there was anything idealistic or pragmatic about that political car crash.

I ask, “So just how much influence does Murdoch have over you at The Times?”

“Over me? None whatsoever.

Today, according to Aaronovitch, you see a “silo mentality” all over the place—a refusal by many people to talk to others who don’t share the same political opinions as they do. Nowhere is this trend more apparent in than the student body. As a close friend of the feminist campaigner and writer, Julie Bindel, who was recently blocked from speaking by Manchester’s Students’ Union, David Aaronovitch turned his guns on the student movement.

“Why are students blocking people from speaking who they don’t like? Well it looks to me as if we’ve brought you up to be such a nice bunch really. You don’t sod off out of the house at 18 and not come back like our generation did. And you don’t think your parents are a bunch of shite, you actually quite like them.

“It’s a bit like the argument that we haven’t let our children play enough in the dirt because that actually effectively inoculates you against viruses. Have we been so incredibly protective, are you so precious, that whether or not you feel slightly bad at any one moment matters more than whether or not something is true?”

David Aaronovitch was Chair of the International Index on Censorship in 2013 suggesting that he knows his stuff on freedom of speech. Perhaps members of the NUS knew this, as he tells me that when Newsnight invited Student Executive members from the NUS to debate Aaronovitch on censorship in universities, only one member accepted the invitation—the Dane, Toke Dahle from Leeds University.

“Somebody coined the term ‘vindictive protectionism’,” he continues. “It’s where people claim to be active on behalf of other people who they think are being offended or denigrated. They use this as an opportunity to get pleasure from condemning someone else. The only time you can legitimately be very nasty to someone else is when you accuse them of being offensive or morally wrong. You can be really horrible them, whilst pretending to be the virtuous one.”

Mentioning the recent case at Goldsmiths University where Iranian exile, feminist and ex-Muslim, Maryam Namazie, was shouted down by protestors from the university’s Islamic Society, Aaronovitch laughs at the absurdity of one protestor who cried out “safe-space, safe-space!” when confronted by Namazie.

“Look, the men were behaving very badly at the front of the show. But when they’re kicked out, the women protesters at the back start off trying to be really offensive. But actually, Maryam engages them in debate and suddenly there is something going on there which is outside everybody else’s control.

“There’s a dialogue going on. They are talking to an older woman who actually has been a victim of Islamic extremism. Free speech allows things to happen which you don’t expect.”

David Aaronovitch’s latest book, Party Animals: My Family and Other Communists, can be bought here.