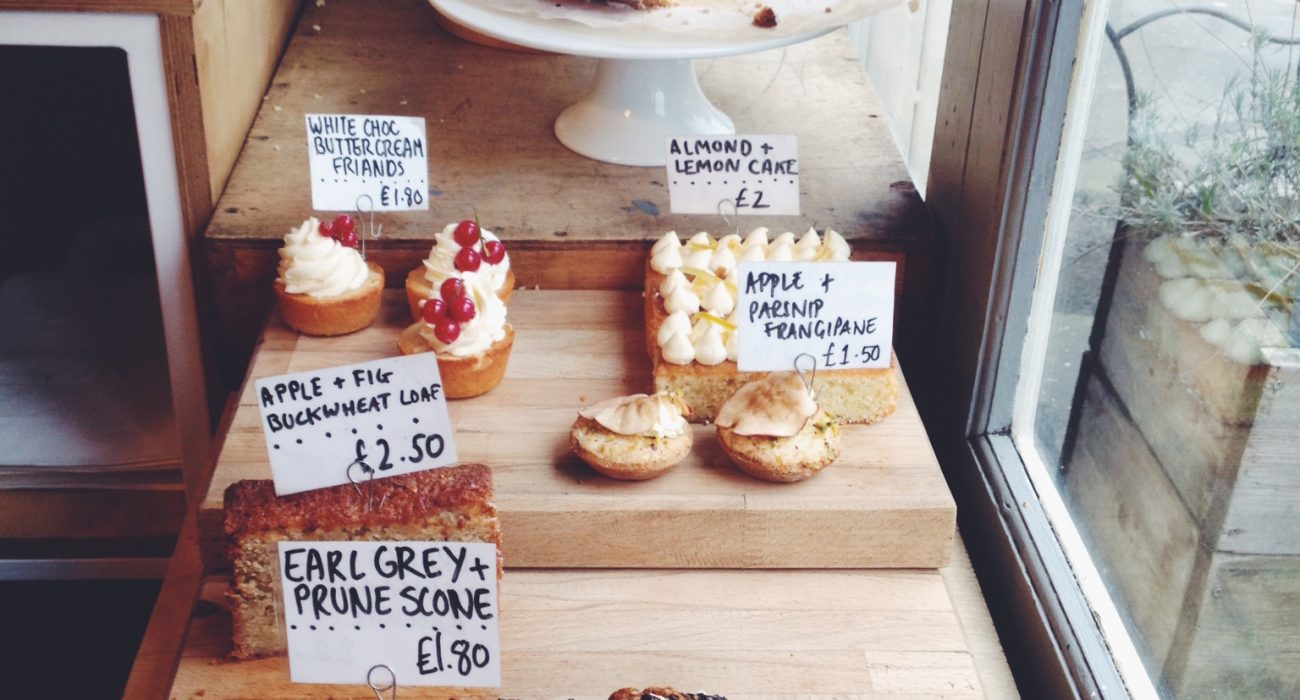 Let me consult my coffee-stained map, my crumpled set of clues to find the stash of risen loaves, chunky jam preserves and malty sourdough crusts.

X marks the spot halfway between Stockport and Manchester city centre, a 15 minute train ride or an exhilarating 20 minute cycle.

Amongst a narrow high street filled with daytime traffic and open shop displays with an abundance of plastic goods lies the little white box filled with stools and tables, counter and kitchen.

This modest little box is rather like Pandora’s; its relatively small appearance bears no match to its ability to stock the majority of Manchester with artisan bread. It is a gold mine of molasses and apple bloomers, rosemary polenta bakes, and floury croissant knots. Where Pandora’s box opens to reveal a world evil, the wooden door of Trove pumps the air with the irresistible smell of Britain’s staple carbohydrate, the same food that was used to feed the five thousand in Matthew 14:13-21, the food that every bread appreciating non-coeliac in Manchester ought to have tried.

Any Manchester foodie reading this will no doubt be familiar with the omnipresent menu tag ‘supplied by Trove’. Common Bar, Takk, Fig & Sparrow, and 8th Day Co-op are just a few of its proud pioneers.

But as for the source itself, could it match up to memories of that first bite of oil-brushed sourdough on the pan-fried chorizo, shrimp and avocado sandwich a la Common, or the taste of the diced wholemeal boule dipped in olive and balsamic on a friend’s balcony in summer? Trove did not disappoint.

A bustling Sunday proved the patience of the staff as I unintentionally arrived half an hour late (due to unforeseen bike circumstances) to the lunch date. Despite an unwavering supply of potential new custom, my comrade managed to anchor the table with a strong black coffee.

Food arrived in 15 minutes in three variations: eggs benedict, salmon and scrambled, and parsnip hummus with shitake mushrooms on rye and fennel. Bread is the focal point here, but gluten-freers needn’t panic as daily specials, salads, soups and vegan breakfasts are also available.

I like baked bread and I cannot lie. Photo: The Mancunion

The hummus on my sandwich was top-notch, very parsnipy. I devoured it whilst placing order number two of a cardamom 83% salted dark hot chocolate creamed with almond milk. Our server warned that this was not the done thing, and couldn’t promise it would work. But oh, did it work.

We stayed at Trove for two hours, basking in the low bulb lighting and heady fumes of yeast and caffeine. An earl grey and prune scone, lavishly accompanied by the liquid form of the first ingredient, kept us happily floating ashore as the rest of the customers sailed away.

The bell tolled 4pm, and we knew it was time to move off. With full tanks, we put up our masts to battle the endless Manchester gale, so enchanted by the spell of Trove that we forgot to loot any treasure.