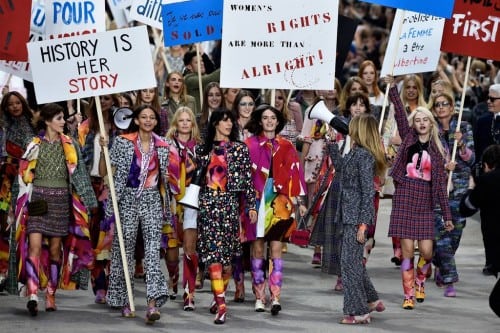 Are fashion and feminism incompatible?

In anticipation of the Women in Media Conference hosted by the Manchester Media Group, 4th – 6th of March, and International Women’s Day, which follows shortly after on the 8th of March, I started musing over my position when it came to feminism. As an editor for the Fashion and Beauty section, does an interest in appearances and the ‘superficial’ necessarily dictate my stance on the social, economic and political equality of the sexes? Is this concern for fashion and beauty just a conspiracy created by the industry to oppress women?

A widely-held opinion that I have come into contact with is that an interest in fashion and beauty is incompatible with feminism. A movement that fights for the equal status of men and women is supposedly undermined by the desire to express oneself through their outer appearance. I would argue that this simplistic view of the fashion-feminism relationship comes down to a misogynistic binary that applies the fundamentally subjective notion of beauty in opposition with intelligence: Women who are preoccupied with their appearance lack capacities in other areas; intelligent thinkers have greater concerns than that of their clothing.

This entire argument is flawed and, moreover, out-dated. Fashion, like any other creative medium, should be considered like an art and a form of self-expression that people can appreciate and replicate in the manner that suits the individual. A quick Google Image search of feminist pioneer Simone de Beauvoir confirms that she was a beautiful woman who expressed herself through her fashion and accessory choices. An example such as this goes to show that an interest in fashion and beauty, or, indeed, the act of dressing oneself, should not be considered as a visual interpretation of how an individual wants to be perceived, rather, a way of exercising their freedom of choice to buy and wear what they choose. It is, to avoid charges for indecent exposure, a fundamentally legal requirement to wear clothing in the UK, so making this daily task more expressive and creative is a naturally human reaction. There is, undeniably, a more nuanced relationship between fashion and feminism than just simple opposition.

The idea that fashion and feminism go happily hand-in-hand is, however, undermined by the nature of the fashion world, which is emphatically a profitable industry. Can fashion really have a credible impact in the feminist movement if it has consumerism and not revolutionary social change at its heart? There is nothing feminist about brands capitalising on their target market’s perceived insecurities to ensure that an economic investment in their appearance will be beneficial, after all.

There have, however, been moments when the worlds of high fashion and feminism have very deliberately collided. During Karl Lagerfeld’s S/S15 Chanel show, he staged a feminist march, complete with megaphones, placards, and lively, animated models who ditched the regimented walking style in lieu of a catwalk mob of psychedelic clothing.

Many were sceptical about Lagerfeld’s faux demonstration. Is the runway really the right place for feminism? As the same man to have called Adele ‘a little too fat’ in 2012, can this revered creative director suddenly be a feminist crusader? It is inevitable (and perhaps necessary) to look to the importance of trends in Lagerfeld’s staging choice. With a feminist discourse (quite rightly) more prominent in popular culture, this cultural trend was perhaps seen as way to capture the attention of modern audiences and garner attention on social media, which is becoming an increasingly vital tool for the fashion industry. Were Lagerfeld and the Chanel entourage simply fishing for Instagram likes by adding a dash of feminist spirit to the show? Needless to say, there have been no feminist runways in the seasons that have come and gone since. This, by all intents and purposes, was a trend that Chanel seized upon; a wave to be ridden, to make a statement in line with popular debate, before proceeding to seek out the next ‘in’ thing.

As dubiously as the floral-clad, megaphone-wielding supermodel-cum-protesters were received by commentators, it was unequivocally a positive thing for feminism to be promoted in such a deliberate and visual way. Popularity and outreach have to be considered in an argument about a fundamentally social movement such as feminism. Beyoncé’s VMA performance backdrop, emblazoned with the word FEMINIST, and the speech conducted by Emma Watson as UN Women Goodwill Ambassador, have reached an astronomically larger and more diverse audience than the readership of Germaine Greer’s feminist text, The Female Eunuch. Figureheads of popular culture, including those in the fashion industry, are integral to the progression of feminism and its evolution, so that feminist becomes a word that women and men embrace and embody, instead of the being the shameful ‘F-word’ that women shy away from using.

Although the growing pro-women sentiments in popular culture are undoubtedly a positive thing, the lucrative fashion industry still has a long way to go in fully embracing a feminist cause. While women account for over two thirds of clothing sales, at an executive level, the fashion industry is still very much a man’s world. Just last month, one of the few female fashion house CEOs, Maureen Chiquet, left her long-standing position as Chanel Global CEO, to be replaced by a man. Mainstream brands such as Victoria’s Secret bid to promote female empowerment with their supermodel turned role-model figures who exhibit the lingerie in immense annual runway shows. As positive and pro-women as Victoria’s Secret’s mission statement might seem, a feminist message cannot be credible if it celebrates the empowerment of an exclusive few; namely the minority of individuals with a desirable (and generally unattainable) look and lifestyle. This example of the workings of the fashion industry begs the question of how women and men can be valued as equals if there is such a defined hierarchy between women, that is entirely based on appearance.

As the face of feminism reshapes and evolves in the wake of a fast-changing, modern society, it seems logical that all facets of society and popular culture should be promoting important messages, such as that of feminism, instead of leaving them for the academic elite to peruse and debate. It is a duty of the fashion industry to interact with feminist issues in order to engage an international and mediatised market. Once we have done away with the redundant binary of beauty and intelligence, perhaps women and men alike can take pride in the freedom of choice to express themselves through their appearance, and thus fashion and feminism can, although not without some contradictions, live together in harmony.