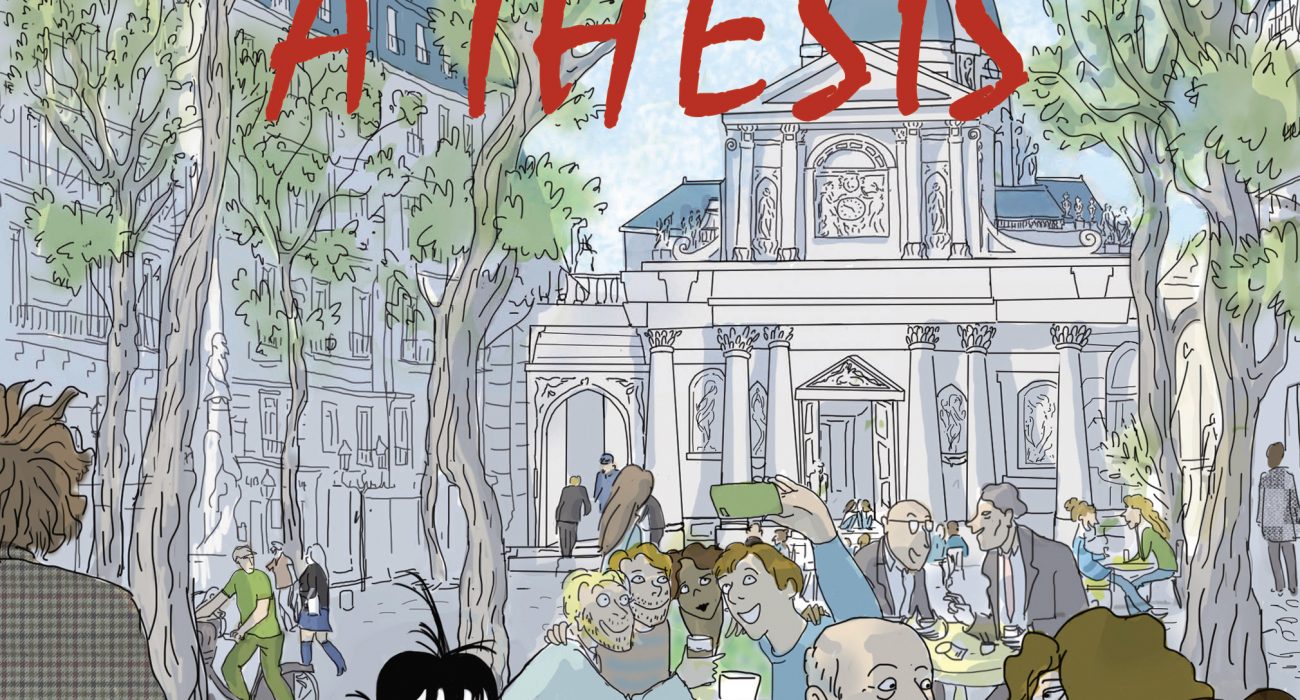 Tiphaine Rivière’s graphic novel Notes on a Thesis is due to be released, translated by Francesca Barrie from the original French, on the 6th October. Often funny, troubling and close to the bone for anyone with a life in academia, the novel transfers effortlessly into English and leaps off the page.

Rivière’s novel is based on a blog she started when struggling with her own PhD; and her brutal honesty of her own experience is what truly brings Notes on a Thesis to life. Jeanne embarks on her own Literature PhD with the hopes of finishing a fantastic thesis on Kafka’s The Trial and the symbolism of the labyrinth in three perfectly timed years. Suffice to say things do not go as planned and as Jeanne becomes more and more disheartened and more and more distanced from the real world, so too Rivière’s illustrations become fantastically surreal and brutally amusing.

In fact the motif of the labyrinth, which Jeanne so desperately tries to make sense of, seems to make an almost satire of itself and her research, and indeed Rivière’s graphic narrative; as both become labyrinths of themselves that neither Jeanne nor Rivière can escape with much confidence or catharsis.

In fact the ending of the novel, while perhaps realistic, certainly offers up little resolution despite Jeanne’s original goal coming to fruition. It is a complex work that challenges what it truly means to be an academic particularly in the realm of the arts and humanities.

While the language of Notes on a Thesis certainly does not fall short it is the artwork that truly stands out; Rivière is a master of humour and heart-breaking honesty. A standout section entailed Jeanne talking to another researcher, so obsessed with talking about herself that Rivière creates her speech bubbles containing the researcher’s face that take up more and more space and finally squash into Jeanne’s own space; this surreal illustration really highlights the nature of this character without even showcasing a word she is saying.

Other beautiful moments involve the graphics that transcend language; the imagery of Jeanne’s research plan emerging architecturally, as a castle-like masterpiece. The use of colour and imagery are what creates the emotive nature of this piece and what allows Notes on a Thesis to be translated so successfully.

However, the language and dialogue of the text seem cruelly, brilliantly, based in truth. In this way, it is poignant and heart-breaking. I found this to be particularly true of the passages in which Jeanne’s relationship with her boyfriend breaks apart. I felt equally frustrated with and empathetic towards Jeanne, her refusal to accept what was happening around her felt truthful towards the experiences of many students, and I therefore felt like I was alongside her as she struggled to keep her head above the water.

I would truly recommend this Notes on a Thesis for any student, particularly those embarking on post-graduate study, if you are looking for an honest, funny account of the world you are all now immersed in; and hopefully it won’t put you off.