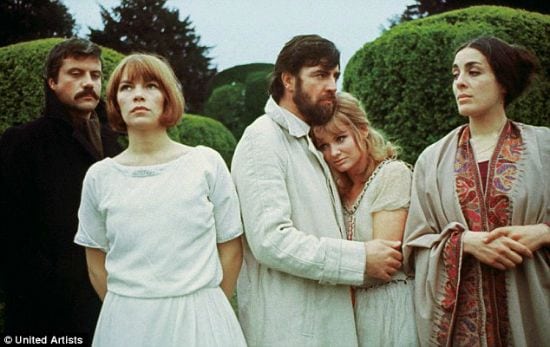 As part of the BFI’s constant restoration of seminal films across world cinema—including the likes of Akira Kurosawa’s Ran and Stanley Kubrick’s Barry Landon—their latest blu-ray re-release is widely considered one of British cinema’s greatest achievements: Ken Russell’s Women in Love (1969). Originally screened in 2015 at the London Film Festival, its restoration was met with widescale praise and celebration, primarily due to the film’s sheer brilliance and to Warner Bros tireless efforts to prevent one of Russell’s other films, The Devils, from having its Director’s Cut from being redistributed. Yet, softer in substance and tone, Women in Love, based on D.H. Lawrence’s novel, blends together powerful cinematography from Billy Williams, vibrant 1920’s costumes, and a proposed tangibility of love. This all serves to create a mesmeric tale of the two Brangwen sisters falling in love in upper-middle class society.

Being an adaptation of Lawrence, Russell’s piece avoids unnecessary attachment to the novel. As demonstrated in recent years, adaptation is a blessing or a curse to filmmakers. Its brilliance can range from Lenny Abrahamson’s touching Room to the darkest depths of slaughtering a classic text, as found in The Hobbit. The seemingly simple task of translating text to the big screen has proven to be more complex than initially thought. What Russell manages to achieve in his adaptation is a complex reworking of the novel. It’s a film that revels in its cinematic format and excavates the original work, all whilst maintaining to stand proudly separate in its originality.

Women in Love, on paper, could have been turned into a mundane melodrama. Though with Larry Kramer’s script, the adaptation was never in the wrong hands. With an Oscar-winning performance from Glenda Jackson as the artistically coiled Gudrun Brangwen and Oliver Reed at the height of his career, their relationship on screen deepens the narrative towards the pair of twisted lovers. Reed’s Gerald contributes an iciness in their love, whilst maintaining a deeply withdrawn lust. The separate-yet-united philosophy of love is embodied in them. On the other side of the coin, Alan Bates’ Rupert Birkin and Jennie Linden’s Ursula Brangwen offer an insight into a pure love that survives individual desire, unlike the former couple.

Thanks to undercurrents of homosexuality between Rupert and Reed, though, the work easily could have been titled Men in Love. One naked wrestling scene between the two men was famously cut by the South Africa Film Classification Board for its male nudity in 1969. What was left was Reed’s Gerald locking the door for it only to cut to both men laying topless on the floor sweating. Not only did this prevent audiences from witnessing a visceral scene, it also withdrew the homosexual underpinnings of their relationship. As a reflection of their cultural position in the upper echelons of 1920s society, costume designer Shirley Russell creates some of the most alluring dresses and suits seen on film. As critic Claire Smith notes: “The costumes of the central characters look forward from the war to the youth, vigour, and energy of the twenties style.”

In adapting Lawrence, Russell, more so than the author himself, penetrates the soul of his work. In using the format of film, the director surpasses the ties that bind the novel together. As always with the BFI, their attention to detail in restorations and re-releases is unparalleled. Moreover, they have delivered something sumptuous for cinephiles to revel in.