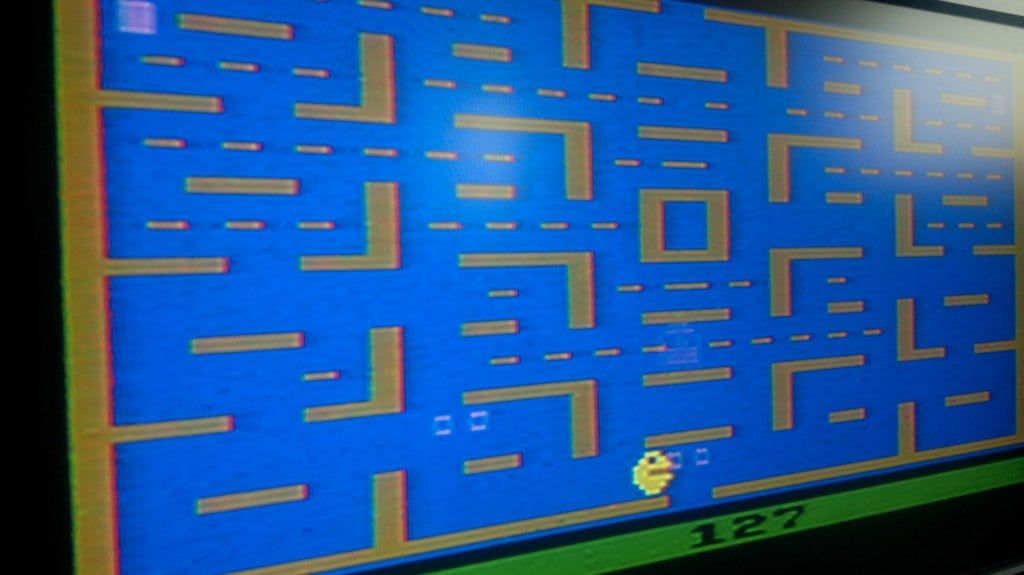 Continuing my kick on the 1980s that started last week with the British home computer, and how influential it was in not only British video games, but the computing industry, I’d like to cross the pond and talk about North America’s adventures with video games. In the 1970s, the first generation of video game consoles in the USA weren’t much to write about. There were a handful of consoles available, none of them for sale over here, most of them costing over $300 USD and they all only had one game: ‘Pong’.

The Atari 2600, released in 1977, was an instant hit because it could play more than one game! It had these things called “cartridges” that had different games on them! It also had colours and sound! To a market that had just spent the better part of a decade playing ‘Pong’ on a black screen, literally anything other than ‘Pong’ was a warm welcome. The Atari 2600 sold like hotcakes. By the beginning of the 80s, Atari was grossing billions of dollars a year. The only real competitor at the time was the Fairchild Channel F, which packed it in very early on. Atari was the uncontested king.
The Atari 2600 was the reigning champ, so of course a lot of pretenders came out of the woodwork. In 1982 alone, five new consoles hit the market, including the Intellivision and Colecovision. Each console had its own library of games. Having five consoles worth of video games in a store takes up valuable real estate and very quickly the market became saturated. What do you buy?

There was a trend at the time among video game companies of not crediting the programmers that worked on games, and Atari was no exception. Annoyed by the lack of recognition for their hard work, many of Atari’s workers quit and formed independent video games publishers. The most successful of which was a little company called Activision. Atari attempted to sue Activision in order to block sales of their games, but as soon as this failed the floodgates were open for anyone to develop third party games. The number of games on the market swelled. Stores didn’t have enough space to carry all of these games, and few of them were any good. Console manufacturers had lost control of what was on their systems and their consoles suffered for it.

There was an expectation from Atari themselves that the appetite for video games was so ravenous that the public would buy almost anything regardless of quality. A prime example of this was ‘E.T. The Extra Terrestrial Game’. A six-week mess of a game thrown together in time for the holiday season. So sure it would be a hit, 5 million copies were made. It tanked and is regarded as one of the worst games ever. Thousands of copies were buried in New Mexico because they just couldn’t shift them. Another notable game was the 2600 version of ‘Pac-Man’. Atari made 12 million cartridges, when only 10 million people owned an Atari 2600. They were anticipating people buying a console just for this game. This attitude was commonplace in the industry at the time. Stores had shelves upon shelves of games that they couldn’t sell as fast as they were getting them.

While video game consoles were fighting it out and flooding the market with derivative tat, home computers were slowly on the rise. Home computers like the Apple II and the Commodore 64 had nicer graphics, better sound chips than the consoles of the time and could do much more than just play games. In 1982, Commodore and Texas Instruments were in the middle of a vicious price war. Commodore cut the price of their flagship model, the Commodore 64 to $300, not much more than the price of the Atari 2600 at the time. Suddenly people were asking “Why would I pay more for something that could only play video games that looked worse?” The home computers at the time could run bigger games that looked and sounded better, while the Atari 2600 could barely run ‘Pitfall’.

So you have lots of consoles on the market, all with lots of sub-par games that no one is buying, and home computers are slowly encroaching on the market. What happens? The market crashes.

The surge of low quality games that flooded shops left the public feeling discontent, and consequently they stopped buying video games. Lots of games were sitting on shelves unsold, which hurt retailers, who sent the games back to the publisher for refunds, which hurt publishers. Smaller publishers quickly went under from the demands for refunds that they couldn’t pay. Stores reduced the space reserved for video games and shoved new games that were normally $30 into bargain bins for quick sales. By June 1983, confidence in video games was at an all time low. The sales from video games plummeted and the Magnavox, Intellivision and Colecovision were all discontinued by 1984. The Atari 2600 clung on, but it was not the titan it once was, with its next consoles nowhere near as successful. This was the video game crash of 1983. The console market remained relatively dormant until the release of the Nintendo Entertainment System in 1987.

Home computers managed to weather the crash fairly well, continued to sell, opened up a new generation to computer gaming and gave birth to a new breed of coders. The freedom allowed to third party developers that was so prevalent here was quickly nipped in the bud, with future companies like Nintendo and Sony tightening control on third party games. Nintendo even imposed a limit on the number of games a company could publish a year. Thanks to this, no one ever made a bad video game again, and instead put love and effort into their games.