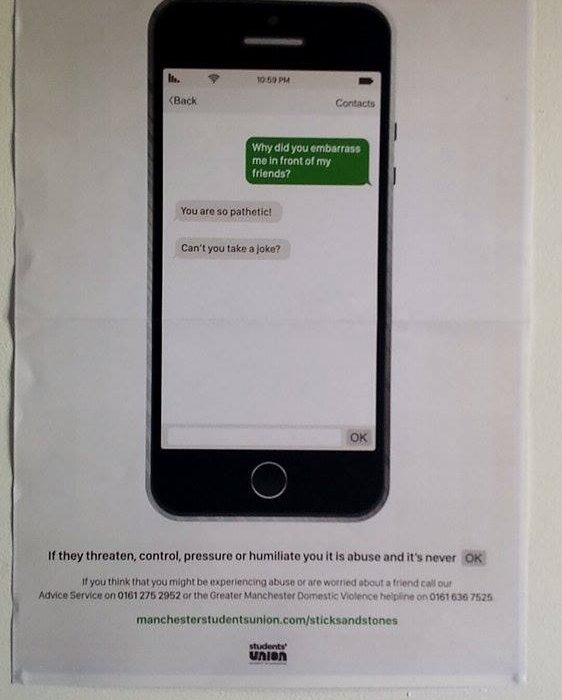 The 28th of October marked the launch of the newest Women’s campaign from Manchester Students’ Union, Sticks and Stones, a poster campaign raising awareness of emotional abuse and coercive control.

The actions of an emotionally abusive partner can include, according the the women’s campaign, “regularly putt[ing] you down or humiliat[ing] you, threaten[ing] you, mak[ing] you feel guilty, isolat[ing] you from family and friends, expect[ing] you to put their needs before your own, check[ing] your phone and social media, gett[ing] jealous easily, control[ling] what you wear or where you go, leav[ing] you feeling worthless”.

The campaign aims to raise awareness of the nature of emotional abuse and coercive control, the forms that non-physical abuse can take, and highlight the different organisations that offer support for those who might be affected.

This is the first official campaign from the new Women’s Officer Jenni Smyth, for whom tackling the issues of relationship abuse — particularly for students who are often left out of the equation of such discussions — is listed as one of her top priorities. The campaign’s aims are far-reaching and ambitious.

Thurday’s event consisted of a panel of speakers including representatives from the NHS, Women’s Aid and Saheli Asian Women’s Project as well as a Law lecturer from MMU. Through this discussion they shed light on the breadth of this issue, the changes in the law that now protect victims of emotional abuse, the complexities of the challenges that face minority women, including BAME and LGBT women, and what we can and should be doing to raise further awareness and help those struggling in these relationships.

The event also included booths from campaigns such as the LGBT Foundation, Women’s Aid, Saheli, and the Manchester Students’ Union’s Women’s Campaign, who offered information and leaflets on the issues raised, as well as offering further discussion points as to what their projects do. It was clear that this is a much wider project than simply the Women’s Campaign, and the presence of wider Manchester campaign groups and charities shed light on its importance. Rosa Gane, one of two newly appointed part-time Women’s Officers says of the launch: “It was wonderful to see so many enthusiastic people and to hear from the fantastic speakers supporting such an important cause.”

The event ended by some empowering Spoken Word and some badge-making from the Craftivism society who offered a relaxed space for anyone upset by the issues raised.

If any of issues discussed above raise any warning signs about your relationship or that of a friend, there are many resources available to you on the Students’ Union website which has more details about the campaign and includes a list of helplines and organisations that can offer help and guidance.