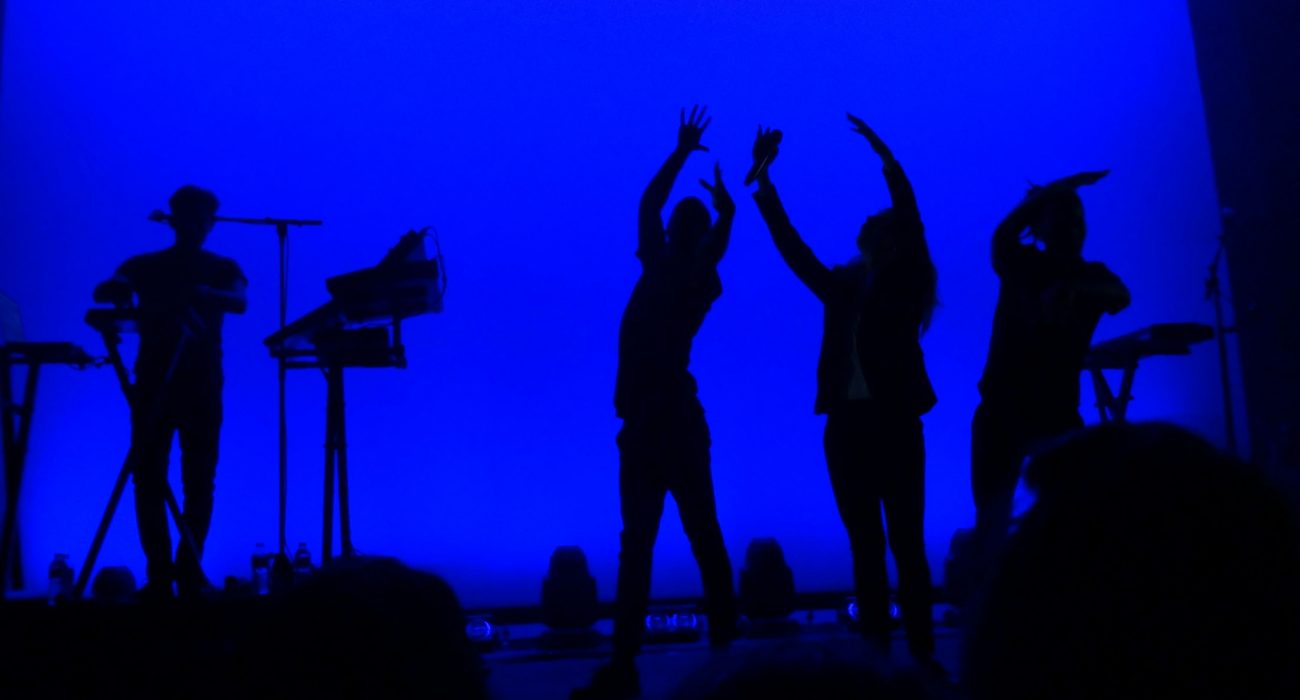 The crowd at the Apollo are distinctly ‘Radio 6’ tonight, despite being here for an electronic pop outfit, and I oddly find myself one of the youngest in the room. Perhaps it is the hefty £30 price tag on the tickets or perhaps the nature of Christine and the Queens’ recent rise to fame. With a critically acclaimed debut, Chaleur Humaine, released early this year and a Glastonbury performance largely lauded as a standout of the festival, the appeal to an older, musically clued-up audience is clear. That is not all to say there is not a notable buzz in the room, as attested by the dashed burst of excitement every time the background music goes quiet between songs.

As the room finally descends into darkness, it is pierced by the electronic thuds of set opener ‘Starshipper’, one of the highlights of the set, featuring a brooding Christine emerging forward, illuminated through sporadic flashes with dancers in tow.

Album track ‘Half Ladies’ features a giant, white-suited Christine projected behind the band, moving perfectly in sync with her three-dimensional, living counterpart. It is a bold move that works well with the band’s distinctive, trademark choreography, coming across effortless.

The backdrop is used again featuring a larger than life Tunji Ige, for his guest verse on ‘No Harm Is Done’ allowing his part to translate live without feeling of being cheated that would come from just queuing the audio. The rest of the set flips between more synchronised dance numbers and the stripped back, solo performances, with radio familiar single ‘Tilted’ getting by far the biggest reaction.

Despite the now classic pop star stage set up, and the many homages to contemporary pop titans (there is a dance interlude to a Kanye West track and even a Beyoncé cover in the encore), there is something distinctly oddball about Christine and the Queens. She makes multiple references to her short stature and French-ness, at one point remarking “I’m coming out to you guys, I’m French.” Admittedly these already separate her from most familiar pop stars, but her distinctive feel is more down to what she has to say.

The narrative of a Christine and the Queens show is one of freedom and self-expression, Christine making multiple allusions to her desire to be a boy at times and telling the audience “This is a free zone tonight.” No doubt this perplexed some of the older members of the crowd, but it feels apt taking place in Manchester, a city known for its celebration of individuality and the vast majority of the room seemed completely behind her.

As the evening draws to an end she laments how she only has so much material to play, “I’m a fresh face — for now,” she quips, and it is true. Christine will no doubt be back soon enough, hopefully with all the magic she brought with her tonight. She ends with French ballad ‘Nuit 17 à 52’, before proposing to the audience, “I want to marry all of you tonight, I want to be your husband.” By the reaction she gets, the answer is a resounding yes.