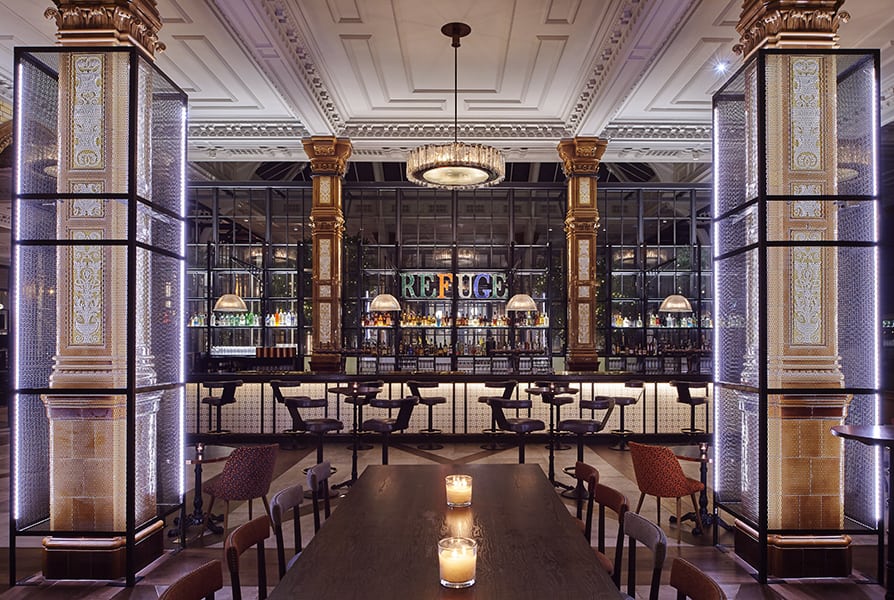 Restaurants For All Occasions

Refuge – For Something New

The Refuge is the second culinary endeavour from Justin Crawford and Luke Cowdrey, two DJs who were active in the Manchester clubbing scene in the latter half of the 90s and early noughties, curating a night called ‘Electric Chair’ (now no longer in circulation, RIP). Having opened their first restaurant Volta, known for its relaxed atmosphere and frill-free platters, in Didsbury in 2013 to critical acclaim, the ravers come restaurateurs jumped at the opportunity to curate the food and drink in the newly refurbished Palace Hotel.

We ordered four starters to share: Slow cooked ox cheek with egg and Sriracha, Serrano ham with olive oil and bread, Baby squid, ink, and lime, and Tuna tartare with avocado and passion fruit. The ox cheek was beautifully cooked, it was tender and wonderfully accompanied by a runny fried egg scattered with spicy Sriracha. The squid starter was interesting, for the accompanying ‘ink’ was presented in the form of a black aioli, something that I’d never seen before, which gave the whole platter an interesting look as it offset the green of the lime and the yellowy deep-fried squid.

‘The glamour of Manchester’, inscribed on the beautiful tiles, encompasses the feel of the building, its high ceilings and pillars, dimly lit dining room, granite bar, red felt pool table, and its beautiful glass atrium. It all works to evoke the past of this historic hotel, while fusing it with the present day, with Volta, and with contemporary food trends. The dishes need refining, but the taste is there in abundance, with Crawford and Cowdrey curating not just a restaurant but a milieu of class and style.

Thyme Out – For Breakfast Dates

If you prefer being out early than up late, a trip to Thyme Out in upmarket West Didsbury might be your ideal Valentine’s destination. Off the beaten track slightly, this area of town isn’t nearly as regularly visited by students as its East sister but is well worth the trip. Neatly tucked away down a side road, Thyme Out serves breakfasts that both taste and look gorgeous. As well as classics like Eggs Benedict and a Full English, they also do a lovely breakfast burrito, avocado & feta on sourdough, and Eggs Cocotte — duck eggs, cream, mushroom and cheese baked to perfection in a ramekin. Everything on offer is presented beautifully too, garnished neatly but with no sacrifice on taste.

Thyme Out serve brilliant coffee too, as well as a wide range of teas as well as fruit smoothies and more decadent milkshakes, all of which can be enjoyed with some homemade cakes which line their counter. On your Valentine’s date you might even push the boat out with a Mimosa or Bloody Mary.

Inside, its walls feature works by local artists, but, weather dependent, you might take the chance to sit outside to enjoy your brunch, in either of their pretty front or back seating areas.

63 Degrees – For Pushing The Boat Out

63 Degrees is tucked away in the Northern Quarter (as all restaurants in this area of town appear to be). It is a family-run French establishment with an expensive à la carte menu and an ultra reasonable set menu at £20 for 3 courses (available Tuesday to Friday from noon until 2.30pm, as well as Saturday and Sunday from midday until 5.00pm) which is well balanced and to the point, with three starters and three main courses.

I often think that the bread offered by a restaurant serves as a good barometer for the quality of the restaurant as a whole, and this bread was no exception. Served both with the terrine and for the table, was a light walnut bread that was so good that I went back for more. The main courses were just as good as the bread, featuring their signature ballottine of chicken stuffed with mushrooms and an elegant plate of sea bass served with braised fennel.

The à la carte dessert menu features macarons and cakes from the amazing Didsbury patisserie, Bisou Bisou, among other offerings, which make for a delightful end to a well executed meal.

By Gina Castellheim and Kate Savin

Stepping from a typical dodgy Manchester road into Kyotoya is like stepping through a magic wardrobe into food Narnia. The restaurant is afloat with red paper lanterns and fairy-lights, which give a lovely scarlet tinge and orange warmth to the intimate restaurant.

For our main course we decided to be daring and chose the Mixed Sushi 12 pieces, letting the expert chefs choose our sushi for us. The dish arrived in a delightful wooden boat, with ginger and wasabi tucked into the helm and flowers positioned delicately amongst the Maki and Nigiri.

Prepared to order, Kyotoya’s sushi is some of the freshest and tastiest in Manchester, without the normal drawback of robbed pockets. One word of advice — don’t go here on a first date, as the large sushi pieces don’t exactly make for dainty eating! However, if you want a truly satisfying meal that doesn’t cost the world and leaves you wanting to come back the very next day, this is the restaurant for you.

Originating in Liverpool, Lunya expanded into Manchester’s Barton Arcade in in 2015. A bright and airy tapas restaurant with a fantastic deli attached, this restaurant has an extensive menu covering cuisine from across Spain. Ordering bread at Lunya means choosing between multiple fantastic oils and vinegars in which to dip the bread. While all of the menu is excellent, I highly recommend the croquettes and anything involving tender acorn-fed pork. Another highlight, even for someone who doesn’t like squid, is the succulent calamari, covered in airy batter and served with a lemony aioli.

Before you leave, make sure to fill in the feedback card and take it down to the deli for 10% off purchases. If you didn’t already get them with the meal then might I suggest buying the divine Catalan almonds (my favourite snack) and the spicy sour cream dip called crema catalana, best served with the soft white rolls that are also sold in the shop.

Dusk til Pawn – For Cocktails

Taking you and your date back to the days of Prohibition in America, even finding Dusk Til Pawn is a challenge in itself. Situated on Stephenson Square next to its less-hidden away sister NoHo, look for the neon “Pawn Shop” sign and the window displays of guitars, TVs and jewellery. Behind their doors, though, is a cosy, welcoming and classy cocktail bar with one of the widest selections of drinks in the city. It’s comfortable and calm, quite a different atmosphere to some of its loud and bustling NQ neighbours.

Dusk Til Pawn has a great range of special cocktails but their friendly staff would also happily whip up a personal favourite of yours with great skill, or recommend a drink based on your tastes. They also produce their own special infusions — popular spirits instilled with new flavours, such as banana and rhubarb. To top it all off, they have a free jukebox full of 20th century classics.

Don’t forget to check out happy hour across the city. We recommend Twenty Twenty Two for their ping pong tables, and Fumo for elegant surroundings.