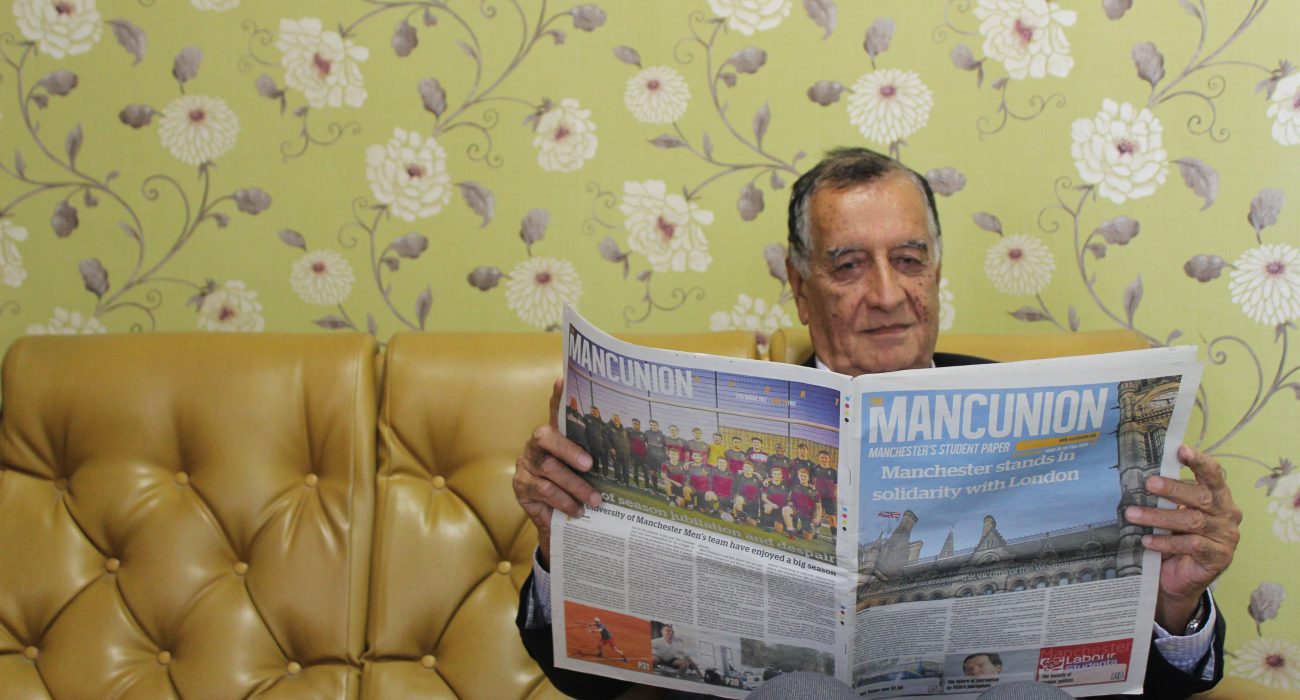 In 1964, less than four years after a ban had been lifted at the University of Manchester on student publications, the first free student newspaper appeared on campus: The Mancunion.

53 years later, the outgoing and incoming editors-in-chief sat down with the man who started it all, to find out a bit more about the man who created such a lasting impact on the Union and university experience of thousands of students.

A lot has changed since the first issue; initially it was more of a pamphlet than a paper as it was four pages long, the editorial team was made up of just four people and they had no women on board. In comparison, we now have 32 pages of content, around 40 editors, and this year just gone we saw the largest number of women editors for a number of years.

Iqbal Shafiq spent his early years in Pakistan and then moved to Gloucestershire on his own to boarding school, as his father was a huge admirer of the British education system. After achieving what he describes as “very good grades” at A-level, he initially began to try his hand at accountancy.

He discovered early on, however, that this line of work was not suited to him, so he submitted late applications to Oxford, LSE and Manchester to study Economics. After receiving a handwritten letter of acceptance from the head of the Economics department, he packed his bags and set off for the North.

Shafiq admits that when he first arrived in Manchester as an economics student he was “very lonely” with his family so far away. That was until he discovered the Students’ Union, where he found the “warmth that I got from my home”.

Shafiq describes watching students from his faculty disappearing together after lectures while he went home and sat in his room, until one day he asked, “‘Where does everyone go?’, and they said ‘We’re going to the Union, come and have a drink’, so I followed them.”

The welcome he received at the Union clearly had a real impact on him and he spoke fondly of the friendly atmosphere he encountered. He explains that this was how the iconic name The Mancunion was born – an homage to the Mancunians who welcomed him to the city and the Union that became his home from home.

Once he had created The Mancunion his loneliness was a thing of the past, as the paper became a close knit community with regular socials held in the Union bar, something we admitted has remained consistent in the 53 years that have passed.

When asked whether or not The Mancunion had a positive first reception, Mr Shafiq replied “much better than we expected”, although he admitted being a little sorry for his friends who worked for their rival student publication The Manchester Independent, established three years earlier which cost fourpence. “They were looking very sad, because they knew this was real competition and the first issue shook the newspaper.” The Manchester Independent lasted for ten years alongside The Mancunion.

The introduction of a free student publication certainly attracted attention, as The Guardian wrote a page 3 article about its first distribution. Shafiq recalled being interviewed by the Guardian journalist back in March 1964, and after the interview we tracked down this article in which he boldly claimed: “Our news will be objective and there will be no censorship from outside.”

As this is still a hot topic with student media we has asked Shafiq how much control he had over the editorial decisions, especially as it was so closely connected to the Students’ Union.

Shafiq explained that, while he was a Union council member, the Union and University had “no say at all” in the content he published, with most of it being objective news reports on the affairs discussed at union council meetings.

However he admitted that while he could be critical he felt much more restricted than we were today in how far he could go with the criticism: “I was a bit careful… because I was hoping that I would get a degree as well.”

We asked whether he has really thought that was a risk, explaining that if criticism was necessary we would not have been concerned that our degree would be threatened and that there had been many occasions throughout the year where we had let students openly express strong feelings against the University and Union: “I had noticed,” he joked, mentioning that he had seen the somewhat controversial articles from the beginning of the year concerning our interview with Vice-Chancellor Nancy Rothwell.

While he explained that it didn’t stop him, he ultimately “tread carefully”. We asked if he could remember ever actually getting into trouble for what he published, and he recalled the head of his department taking him aside and saying “you should not have gone into this but now that you’ve started, alright we won’t say anything, but just be careful”.

The Mancunion appears to have been founded not long after a turbulent period for student publications, with The Guardian article mentioning the ban of student publications by university authorities in its write up about the launch. So it is perhaps unsurprising Shafiq felt the need to be careful.

Given that journalism in general is now in a period of flux, with the rise of alternative media and a growing distrust in mainstream news outlets we asked where he thought the future of journalism was headed.

“Nowadays if you have a cell-phone you get news from I don’t know where, news comes in all the time, so people buy less newspapers”, he replied in a somewhat baffled manner about the rise of online journalism and decline of print — something we admitted even student print journalism is struggling to catch up with.

However he was adamant that the paper had to continue and content that the paper is being left in (somewhat) capable hands, as “one of the nicest things in my life at the moment is that The Mancunion is doing so well”.

Despite his confidence, Kirstie felt as though she needed to ask what sage words of wisdom he could offer to her. He urged her to “keep The Mancunion going” because its importance has not dwindled in the 53 years since its inception, but also to remember that editors still have their “whole life ahead” of them, so they shouldn’t let their studies fall by the wayside.

Most importantly though, he stressed the need to keep scrutinising the Union and the University, as they are not immune from making mistakes and “it’s a newspaper like this that needs to hold them to account.”

He added that he felt “because of the fees and other issues, students have gone through a rough time” and because of this “you need The Mancunion”.

Jenny then thanked him for creating the newspaper as it had given her myriad opportunities during her time at university and set her and countless others up for successful careers in journalism and the media. He seemed quite modest about his achievements, replying: “It is… the simpler things in life [such as The Mancunion’s continued existence] that makes you feel good.”

After the interview, he took us for a drink at Kro Bar across the road from the Union. He continued to reminisce, specifically about the countless times he and his editorial team would go out for drinks after publishing an issue of The Mancunion.

At least some things never change.