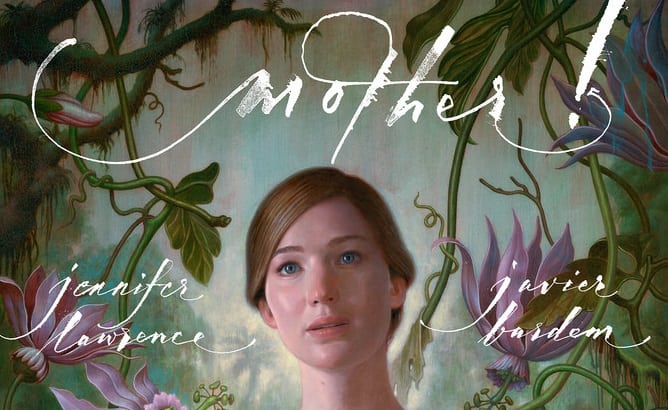 Darren Aronofsky has an interesting back catalogue. Artistic and dark features such as Requiem for a Dream (2000) and Black Swan (2010) are the front-runners, whilst more mainstream hits in The Wrestler (2008) and Noah (2014) are entertaining, yet less inventive works by the American auteur. Expectations were high for Mother!, with such a tremendous cast and premise.

Jennifer Lawrence stars as the wife of struggling writer Javier Bardem, and they live together in an isolated, picturesque house surrounded by fields and woodland.  Lawrence’s ‘Mother’ (the characters are nameless, and are credited simply with descriptors such as ‘Him’ or ‘Fool’) describes her home as a “paradise”, yet this self-made utopia is disrupted when ‘Man’ (Ed Harris) appears at their door, claiming to mistake the house for a bed and breakfast. Shortly after, ‘Woman’ (Michelle Pfeiffer) turns up — Man’s glamorous and femme fatale-esque spouse.

What follows is a tale of paranoia, deceit, and horror as ‘Mother’ faces a struggle to maintain her sanity, whilst attempting to prove to her naïve husband that something is not quite right about the polite yet sinister guests who have arrived at their home.

Having watched the trailer and heard tales of audiences walking out of screenings in disgust, going into Mother! I felt I was prepared for whatever Aronofsky was going to throw at me. The film starts slowly, yet the intrigue the director induces in the audience is almost tangible. The first hour or so is reminiscent of an eerie, tension-ridden silence before a jump-scare in a horror film, and just as Lawrence’s protagonist does, the audience scrutinises every detail on the screen, ears pricked for the quietest of noises.

The relationship between Lawrence and Bardem is akin to that of Mia Farrow and John Cassavetes in Roman Polanski’s Rosemary’s Baby (1968) — a wife who can sense malignant conspiracy but whose suspicions are constantly rebuked and laughed away by her starry-eyed and narcissistic husband.

Once the tension rises to boiling level and inevitably explodes, the film descends into chaos.  Without meaning to include any spoilers, it is possibly the most uncomfortable and oppressive stretch of on-screen action I have watched in my life. One scene in particular is horrifying, and similar to reviews I had read beforehand, certain members of the audience evidently found it too much and left the auditorium.

Despite all the religious connotations and allegories to Genesis (in short, Jennifer Lawrence’s character is a metaphor for ‘Mother Earth’ and Bardem’s ‘Him’ is representative of God), Mother! is a nightmarish whirlwind which ultimately somewhat loses direction.  The intrigue and tension, with which the film’s first act is ripe, is seemingly tossed aside by Aronofsky in the film’s later two acts.  I could not help but feel that this was arguably a gratuitous attempt to merely shock the audience to an extent which surpasses the boundaries of ‘mainstream cinema’.

However, Mother! is undoubtedly an impressive artistic feat. Visually it is masterful, and regular Denis Villeneuve collaborator Jóhan Jóhansson has produced a chilling and understated score which perfectly encapsulates the mental torment of Lawrence’s ‘Mother’.  The star-studded cast is equally fantastic, with Lawrence demonstrating her acting prowess by portraying a character that is very different from those that she’s best known for in The Hunger Games and X-Men series.

A shocking and traumatic film which feels more like artwork than a movie, Mother! is an oppressive, hellish ordeal which just about retains enough structure to avoid descending into pure havoc and terror.  Definitely not for the faint-hearted, and even for those who deem themselves confident in the face of boundary-pushing cinema, take a deep breath before viewing.