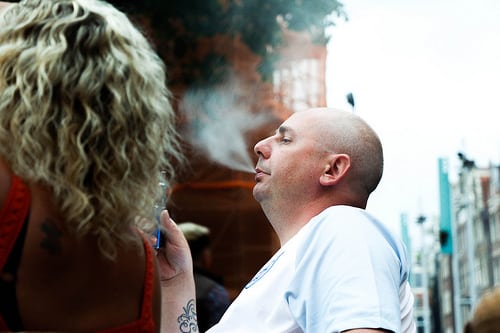 Mayor of Greater Manchester, Andy Burnham, has this week supported the ‘Stoptober’ smoking campaign, which hopes to spur smokers across the United Kingdom to quit smoking for good.

In its sixth year, the Stoptober campaign claims that if “you stop smoking for 28 days and you’re 5 times more likely to quit for good”, encouraging the falling numbers of smokers in Manchester to quit smoking.

According to Cancer Research UK, 19.9 per cent of over 18s smoke cigarettes in Greater Manchester, notably higher than the countries average of 16.9 per cent.

However, Burnham seemed optimistic when discussing the overall decline in smoking across Greater Manchester.

He said: “The latest success rate shows that advances in support and a stronger anti-smoking culture are leading to more people successfully stopping smoking.”

The ‘Stoptober’ campaign is one such form of support that is being promoted throughout communities.

For the 28 days the campaign runs for, an online messaging service and daily email support is provided to those taking part, as well as highlighting existing long-term support services in communities and strategies to quit the addiction to cigarettes.

In addition, for the first time, the ‘Stoptober’ campaign is advocating the use of e-cigarettes as a means to reduce the intake of tar and carbon monoxide, being a lower-risk form of smoking.

“E-cigarettes can be good, because it still allows you to keep up with the social side of smoking”, one University of Manchester student commented, adding that “e-cigarettes are a good transition from real cigarettes to quitting. I think it’s better to give people a way to keep up with the social and almost comforting aspects of smoking rather than guilt them into just dropping everything.”

The ‘Stoptober’ campaign also highlights the cost of smoking, claiming that smokers could save up to £250 each month by quitting, a fact enhanced by Lord Peter Smith, the portfolio lead for the Health and Social Care side of the GMCA, who said the campaign could “empower [people] to stop smoking because it does improve your health and your wealth.”

However, when asked about this fiscal incentive, taking into account student debt and rising living costs, another student noted that “most will just budget the cost of cigs into the week”, before adding that “people budgeting in the cost of cigarettes isn’t much different than budgeting for drink on a night out, so I don’t think people are going to be that bothered by the motive of money.”

Smoking in Greater Manchester is estimated to cost the NHS £110 million in smoking-related diseases, as smoking is seen by healthcare professionals as a cause of a variety of potentially life-threatening conditions including but not limited to lung cancer, liver cancer, and heart disease.

Six years on since the campaign first ran in 2012, an estimated one and a half million people have quit smoking. ‘Stoptober’ runs until the 28th of October, however many of the services promoted continue on throughout the year, such as local stop smoking services in the area.

Mayor Andy Burnham said on the launch of the campaign that “This year in Greater Manchester Stoptober is bigger than ever- we want to encourage everyone who smokes here to quit together from the 1st of October.”