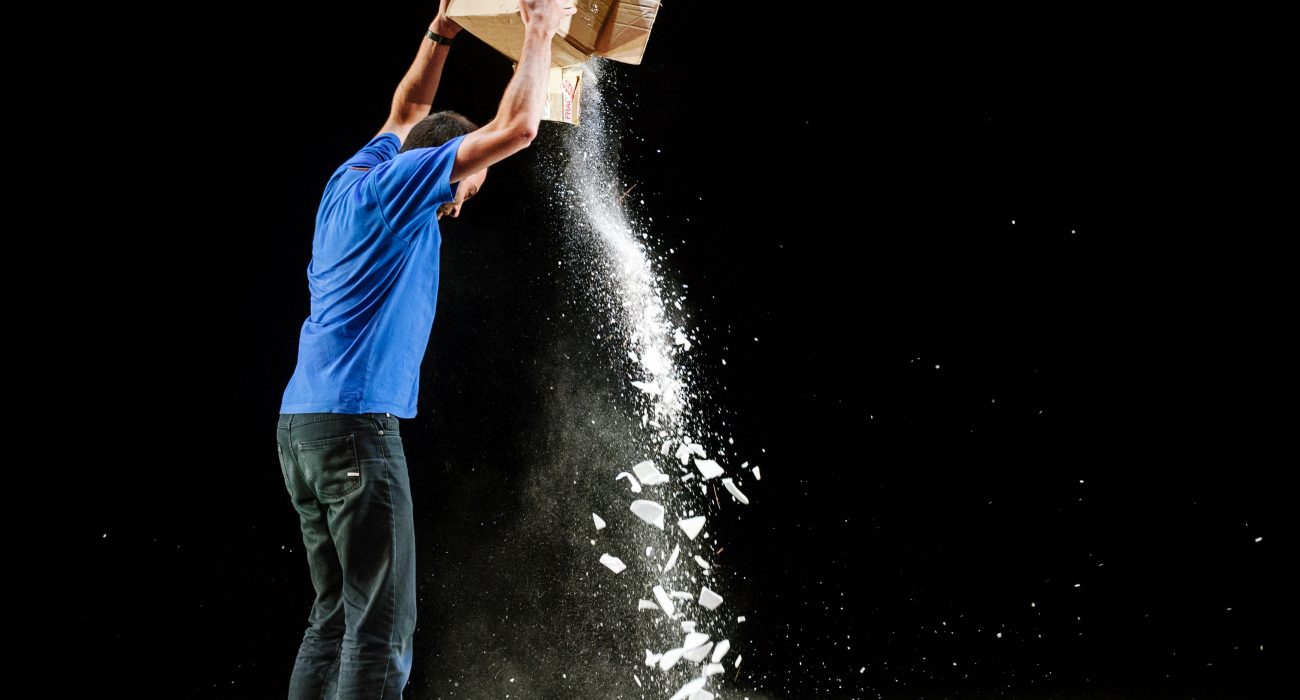 It begins and ends in deafening silence. The audience are lit with bright luminescence, giving no one a chance to look away. We are the spectators. No one can ignore what is happening. Ceramic dust flies through the air as boxes upon boxes of plates are smashed to the floor.

Nasi Voutsas and Bertrand Lesca bring their self-diagnosed intensely toxic relationship to the forefront of the stage in Palmyra, leaving everyone watching with a million questions. The play aims to explore the political climate of destruction and retaliation in Syria, and does this through the relationship between the performers. Lesca breaks a plate, so Voutsas has to too. It is an endless cycle of destruction.

The destruction seems immeasurable, uncivilised and brutal. Perhaps, as the title suggests, it is to be compared with the chaos that occurred in the ancient city of Palmyra itself. The Unesco world heritage site was smashed to the ground by Islamic State fighters after a 10-month occupation.

You could argue that there was no real reference to the sacking of the ancient city. Was it simply two psychologically unstable men exploding with aggression? Would we know what inspired the play if not for the title? Maybe not, but it is hard not to absorb the anger and the betrayal from the thunderous silences in between the moments of hysteria.

It’s the dynamic between the two leading men that really leaves a lasting impression, however; tender, but with moments of such intense hatred you wonder if it is just for show. Darkly manipulative, Lesca speaks with such conviction you cannot question what he is saying.

Voutsas is more hysterical, more manic, more neurotic. Tortuously aggressive, we can only watch in stunned silence at the mind games they play with each other.

There are moments where you would be forgiven for being unsure what exactly is happening. The sharp cuts from barbarity to serene dancing create visions of chaos; it is the extreme contrasts that inject comedy into the performance, as well as the skilfully written script.

The comedy acts as a mechanism to exaggerate the idea that perhaps the destruction is ridiculous. Is it not simply wasteful, unnecessary and selfish to destroy things of beauty? Perhaps that is a bit dramatic to say over a ceramic plate.

With powerful imagery and a potent dynamic, Palmyra forces the audience to confront the reality of a broken relationship. The broken plates with their permanent cracks display a symbolic truth that lingers in the air long after the play ends. If I had one word to describe it: strange. It was strange.

You are left with questions that are never truly answered. Why did they so truly hate each other? Applying this dynamic to Syria can be thought-provoking, however. I thoroughly enjoyed the performance but there were moments where I could sense everyone in the room was confused. I can’t have been the only one left pondering for a while after it ended.