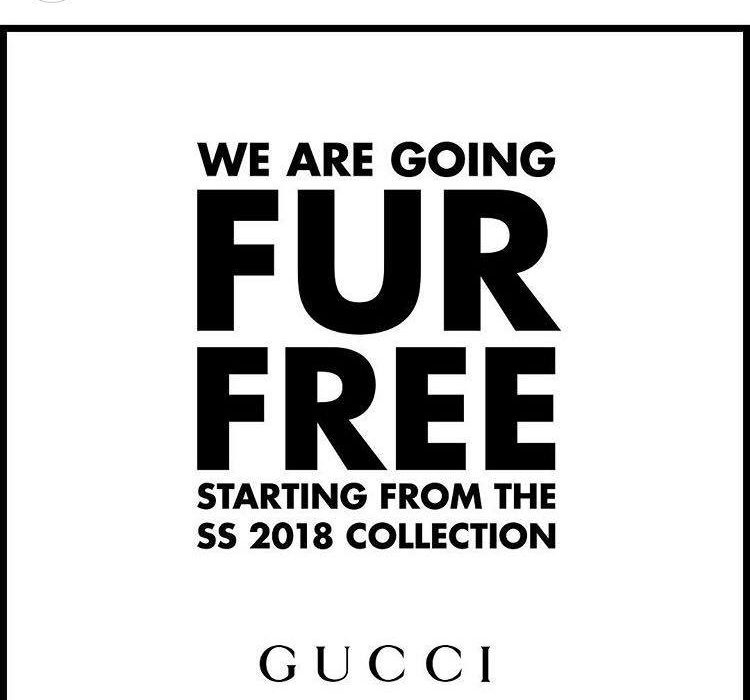 At the Kering Talk at the London College of Fashion Marco Bizzarri, the CEO and president of Gucci announced that as of 2018, the Italian fashion house will go fur-free, banning the use of coyote, mink, fox, racoon, rabbit, and other species bred or caught for the purpose of fur. Not only that, but they will auction off their remaining stocks and items of fur, the proceeds of which will be donated to animal rights organisations, LAV, and Humane Society International.

It should be noted that Gucci is not the first major fashion house to go fur-free however, in 1994 Calvin Klein banned fur after talking with the People for the Ethical Treatment of Animals (PETA). Other brands including Armani, Stella McCartney, and Ralph Lauren have all forbidden the use of fur in their products.

Hopefully, then, Bizzarri’s decision will please animal rights activists who have been protesting the use of fur for fashion and the practise of fur farms for years.

Indeed, in September this year activists drenched in fake blood demonstrated at several shows at London Fashion Week including Burberry and Versus Versace. Animal Rights Activists also launched a three-day demonstration outside of the British Fashion Council’s residence signalling a far more organised resistance against the use of fur in fashion.

In a speech at the Humane Society of the United States, Bizarre said, “Being socially responsible is one of Gucci’s core values… we will continue to strive to do better for the environment and animals.” Also adding that he hoped that this would inspire other leading luxury brands to do the same.

However, Bizzarri’s reasons for ceasing using fur are not entirely ethically motivated. In a conversation with Business of Fashion (BOF) before his Kering Talk, Bizzarri commented that the use of fur in fashion is simply “a little bit out-dated” and no longer innovative or modern.

Instead, Bizzarri and his creative director, Alessandro Michele, have decided to investigate faux-fur, wool, and cutting-edge new fabric innovations further; “The alternatives are luxurious.” Gucci is a luxury brand, and you can be assured that this decision was one that was made carefully and with consideration. If Bizzarri and Michele believe as they have stated that they do, that “there is no need”, then you can be pretty certain that there isn’t.

Bizzarri emphasised that this was the decision was made possible by Michele, who joined Gucci in 2015, stating, “I wanted to find someone who shared a belief in the importance of the same values.”

This coming together of ideas and vision is be welcomed — Gucci is one of the most recognisable brands in luxury fashion and it is important that the people in charge of it share the same ideals and hopes for the future as their customers. Millennials make up over 50 per cent of Gucci’s sales, and as research has shown, they are more ethically and environmentally conscious than previous generations.

By going fur-free, Gucci is adapting to the changing desires of its consumer base and showing its creative and innovative drive. As Bizzarri pointed out, “creativity can jump in many different directions instead of using furs” and Gucci is one of the most well-known fashion houses in the world. Hopefully, they’ll be able to lead the way for other fashion houses to do the same.