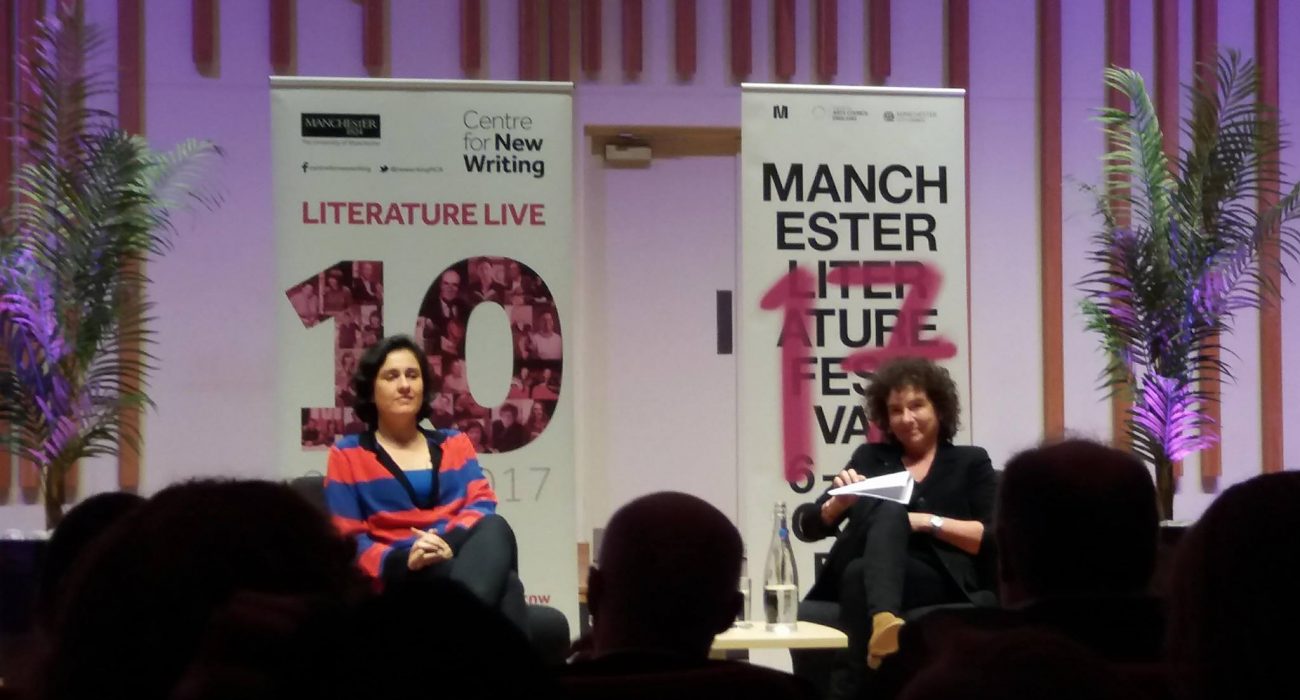 Ahead of becoming a senior lecturer in creative writing at the University of Manchester’s Centre For New Writing, Kamila Shamsie sat down with Jeanette Winterson on the 17th October, to discuss her latest novel Home Fire.

Based on Sophocles’ Antigone, it questions the sacrifices we will make to protect the people we love,through the story of two families, whose fates are inextricably linked, in the midst of jihad and political unrest. It was longlisted for the Man Booker Prize 2017 and is the sixth novel of Shamsie’s, who was selected by Granta as a Best Young British Novelist in 2013.

She grew up in Karachi and now lives in London and whilst in conversation with Winterson, she discusses her experiences in both cities in reference to writing and Home Fire itself, whilst highlighting the importance of art and culture in times of political discord.

Jeanette Winterson began by describing Home Fire as having a “contemporary relevance” after Shamsie read an extract from the novel about one of the characters being rigorously questioned by airport security, alluding to the current political climate of Trump’s America.

Shamsie’s reply stated the inevitability of writing about politics and current affairs when it is “breathing down your neck” although she did assure us that sometimes she is much more inclined to pick up her copy of Pride and Prejudice for the seventeenth time, a comment that was evidently relatable for much of the audience, as it was met with a sort of reassured chuckle.

The evening was full of insightful, colourful, and articulate comments thanks to Shamsie’s complete and coherent explanations of her novel itself and the issues surrounding it. Whilst discussing metaphor and allegory in the novel generally, she said “sometimes people are able to look most clearly if you give [things] to them indirectly”. This quote resonated with me as an English student who cannot help but consider the implications of not only the nuances within texts but also within the smaller things in life.

A question that was brought to the forefront of the evening was whether art should stand — or whether it is possible for art to stand — as Winterson put nicely, “on the side lines of history?”

This led Shamsie to explain how this novel in particular offers a different and more realistic story to the accepted political rhetoric regarding race, immigration and different cultures in Western society.

In reference to ISIS, she discussed how the novel highlights how the extremist group perhaps does not primarily appeal to the people it aims to, because of its violence, but because its primary recruitment method is tapping into the vulnerabilities of its target audience, offering a sense of belonging and a lack of racism.

The central question of Home Fire is, as Winterson highlighted, “what would you stop at to protect the people you love most?” and the two authors explored this question throughout the evening.

“I don’t know what I’d do” was Winterson’s answer, saying that this is what really disturbed her about the novel. Shamsie focused less on her own stance and more on the issues surrounding the question, questioning whether it is fair to judge people who have been put in compromising positions and stating that the real question is why people have been put in those positions in the first place.

The answer to this question, she explained, lies on the first page of the novel: “The ones we love are the enemies of the state.” The ambiguity of this sentence unravels as you read further into the book.

Questions of morality were also discussed and Shamsie came to the conclusion that essentially, morality is irrelevant in the face of love. “Who are you if you don’t make [morality] an irrelevance?”

Shamsie, in discussing her dual citizenship as a citizen of Pakistan and Britain, explained her ability to feel comfortable in many different places that are important to her. She commented on the strangeness of the accepted custom of having “a monogamous relationship with the isle of home”, an observation which one audience member called the stand out moment of the night.

Shamsie has been met with acclaim in both Britain and Pakistan and, fittingly, her photo is now in the British Council Library in Karachi where she grew up reading.

The most interesting part of the evening for me was the discussion concerning the necessity, effectiveness, and urgency of culture in times of political unrest, a topic that was returned to again and again.

Shamsie summarised her viewpoint by beautifully stating: “Art is not going to be the thing that brings down borders and barriers… but art may remind us of humanity.”

She puts emphasis on the importance of this “in times of darkness” and I think that this is something that is relatable for many today.

Listening to the effortless, colourful conversation between two authors who were clearly both passionate and knowledgeable about the topics they discussed was a delight.

Winterson’s humour combined with Shamsie’s extraordinary insight and integrity made for a discussion that flowed and intrigued the audience, so much so that I am ready to go and re-read every novel of Shamsie’s, as Winterson regularly encouraged us to do throughout the evening!