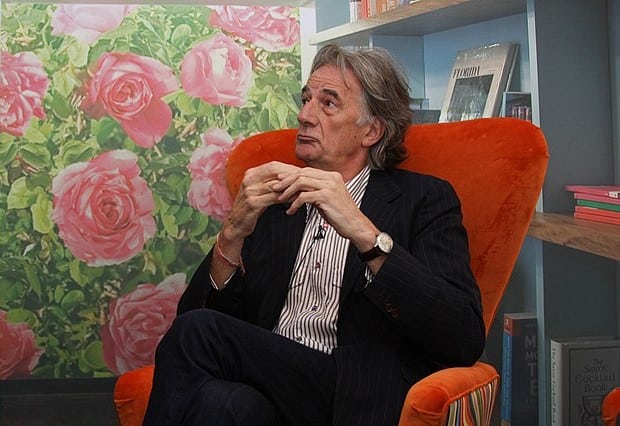 Quietly confident and surprisingly humble, not the words most expect to describe a pillar of British design or the man behind an internationally renowned brand whose career has spanned the best part of five decades — but Sir Paul Smith defies expectations.

Specialising in an inventive use of craftsmanship and cutting-edge design to combine tradition and modernity, the designer spoke to a select audience about his own ventures in business, and discussed the ways young individuals can stand out in the fast-paced, tech-centred workplace:

“Follow What Is Happening But Do Your Own Thing”

You might know of Paul Smith through his hot-pink shop walls in LA — a regular on Instagram which has made the store the most photographed building in California — even more popular than the Hollywood sign.

Melrose Avenue has over 20,000 shops, so how did Paul Smith go about catching the public’s attention? By making a big statement. Smith says that, in business, it is essential that you “make your point of difference clear”. In our commercially driven world, the only way to beat the competition is by making yourself unique.

Consequentially, each one of his stores features unusual design quirks you just will not find anywhere else, something which Smith feels adds to the experience – whether that be a wall mosaic made of 2,600 dominoes or a stained-glass window made from photographic slides on a lightbox.

“You Can’t Do It Without Doing It”

Universally, most people struggle with the idea of balancing time between the work that pays the bills, and the projects they’re passionate about which simply don’t — at least initially. Monday to Thursday, Smith worked on jobs as a freelance stylist for Face Magazine, a photographer, and as a textile designer for mills in Yorkshire — spending the weekends on his own brand.

Smith says this period was influential in his brand’s development because it helped better his understanding of the industry. Over time, his weekend passion project grew in success. The first ‘Paul Smith’ store opened in 1970, in the 12ft by 12 ft backroom of the tailor he was working for at the time. Now that tiny start-up has grown to produce an annual turnover exceeding £192 million.

“Do Things That Are Right, Not That Are Easy”

Ever the innovative businessman, Smith removed his best selling stripe motif from all products three years ago. This bold and risky move is one he felt was necessary to ensure the brand would be known for more than just its stripe motif, and would, as a result, continue to be relevant to a wide range of customers — not just one generation.

The stripe isn’t gone for forever though, as Smith is currently in the process of reintroducing a new stripe combination, in colours derived from a Frank Auerbach painting at the Tate Britain.

“Find Inspiration In Everything”

When asked how he cultivates and maintains a strong brand identity across a diverse range of products, Smith responds “I don’t look at it like that. I just follow my instincts. I want to be sure we are always doing something different and new, that we are keeping ‘Paul Smith’ interesting”.

His eclectic inspiration ranges from high art to the every day. Matisse collages, interiors magazines, and even merely the colours of the season — its all the same to Smith: a starting point; “I don’t want to go the obvious route”.

“The job changes you, you never change the job”

“Whatever the job, you can always learn something”, Smith stresses. In a variety of anecdotes, he describes how cycling taught him to “never give up” and to “dig deep when you’re feeling tired”, and discusses how photography taught him not just to look, but to “see”.

Smith goes on to advocate “being childlike, not childish. Staying inquisitive. Being interested and interesting”, and always remembering to “follow your instinct”.

Smith also emphasises the importance of politeness in his continued run of success. The self-proclaimed ‘King of Bad Jokes’ said “Ask, don’t tell” — people respond to conversation and dialogue. Manners cost you nothing, but in the age of non-verbal communication methods, it can be the smile, the please/thank you and general respectfulness that will win you the job.

His words, though not devoid of clichés, were spoke with sincerity and honesty, and we could all do a lot worse than that to listen to Paul Smith’s advice: “effort is free of charge [and] nothing worthwhile happens overnight”.