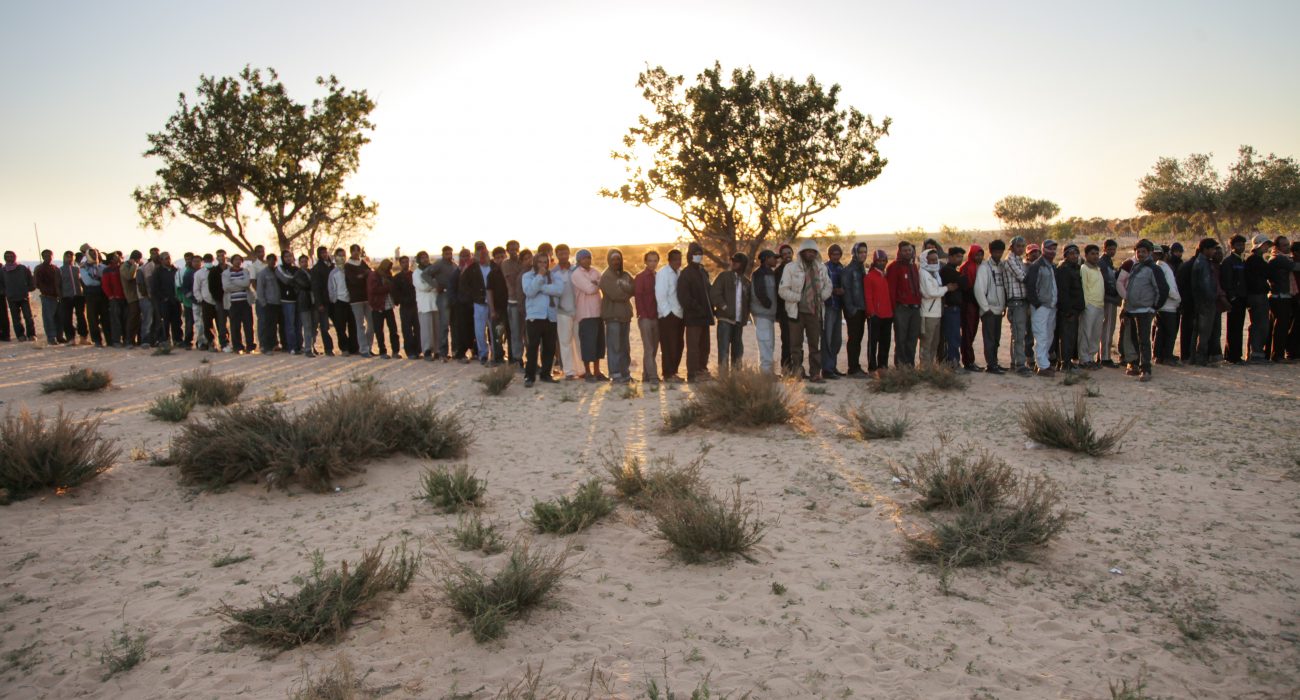 Hundreds of refugees from Libya line up for food at a transit camp near the Tunisia-Libya border.

You could be forgiven for not being aware of the horrific reports from Libya which have gained momentum in some parts of the press this week.

I emphasise the word some — within the last week, no broadsheet paper has featured on its front page the story which should be unthinkable in 2017: that West African refugees are now victim to a slave trade which has sprung up in the Libyan hinterlands, far from the squalid detention centres on the coast where as many as 15,000 have been holed up for months. CNN footage shows men being sold as farm workers for as little as the equivalent of $400.

As far as I can tell, this level of coverage has constituted the greatest emphasis on this human disaster for the best part of a year — it seems, at least in English language media, that outlets including the BBC, the Guardian and The Independent first reported on the dire situation in Libyan refugee camps in February 2017.

Yet many of us are only really hearing about it for the first time now, with the release of CNN’s report. How did a situation arise in which reactions to news over nine months old have been described as ones of shock? Maybe we have become too numb to terrible news — dealing with that is an altogether different question.

We can still ask ourselves how this crisis came to be and what can be done to fix it — questions for which there is no simple answer. We can lay blame on the heads of Europe for not having done enough to offer relief allay the dangers faced at the source of the refugee crisis, despite efforts by some to accommodate those who arrived on the continent.

But the thousands who didn’t survive one of the treacherous boat voyages over the Mediterranean are testament to the fact that prevention is better than cure, and in this vein, Britain needs to take a more active role in ending this nightmare for Libya’s refugees — because it’s a mess that we had a large hand in starting.

The 2011 military intervention in Libya which resulted in the removal and death of Colonel Gaddafi, Libya’s ruler of over 40 years who was described by some as a dictator, was one in which Britain had a large role, only in the aftermath to shirk any responsibility to reconstruct the country.

No sooner had a transitionary council been installed, which in the end never provided the necessary foundation for a stable government, NATO troops were withdrawn from Libya. None of the communities destroyed by fighting, thousands of displaced people, and widespread factions of gangs, extremists and militia were considered reason enough to establish some kind of medium term support on the ground. Six years later and Libya is deemed too unsafe to be reached by diplomats — the airport at Tripoli has been shelled beyond use.

President Obama would later accuse David Cameron and the then French president Nicolas Sarkozy of being responsible for what he called the “shitshow” in Libya, not having fulfilled their obligation to deal with the aftermath of their military campaign and restore order to the country.

At least France is now behind efforts to evacuate those who wish to leave the detention centres, with Macron announcing an EU “Marshall plan for Africa” of $44 billion to fund this action as well as investigations aiming to dismantle slave trade rings, and to address the issues causing mass migration from the continent.

Meanwhile, the cause has yet to be granted so much as a mention in Parliament — although a petition signed by almost 240,000 at the time of writing will ensure that possible action will at least be considered for a debate.

Now the Guardian reports that the rhetoric of the man whose hand our government has held since the start of his presidency is being used to stop help reaching the most vulnerable, making relief efforts more difficult. President Trump has turned the red card of ‘fake news’ frequently shown to him during his presidential campaign into one of the most valuable in his hand, using it liberally to denounce any story that doesn’t speak favourably of him.

The broadcaster Libya 218 used his latest Twitter tirade against CNN to dismiss reports of a slave trade as ‘fake news’, playing into the hands of Libyan diplomats who would rather deny the deepening crisis in their country than end this scourge.

Theresa May was right to condemn Donald Trump’s retweets of racist, falsified videos created by Britain First, a basket of deplorables in the truest sense. Let’s also not forget that their name was shouted repeatedly by the terrorist who murdered Jo Cox in her constituency last summer.

Yet even despite this, a state visit offered to Trump with frightening haste after his inauguration will still not be cancelled. May’s criticism was tame, amounting to little more than a slap on the wrist. “It was the wrong thing to do”, she said — a blanket response which applies just as much to another of his gaffes as it does to the perpetuation of lies which are detrimental to efforts to end barbarity in the 21st century.

In the same thread, we could also call Britain’s lack of support for Libya as it emerged from a harsh civil war as the wrong thing to do. But the hundreds of thousands gathered there from across Africa who have been left behind by Conservative military intervention deserve to hear much more than that.