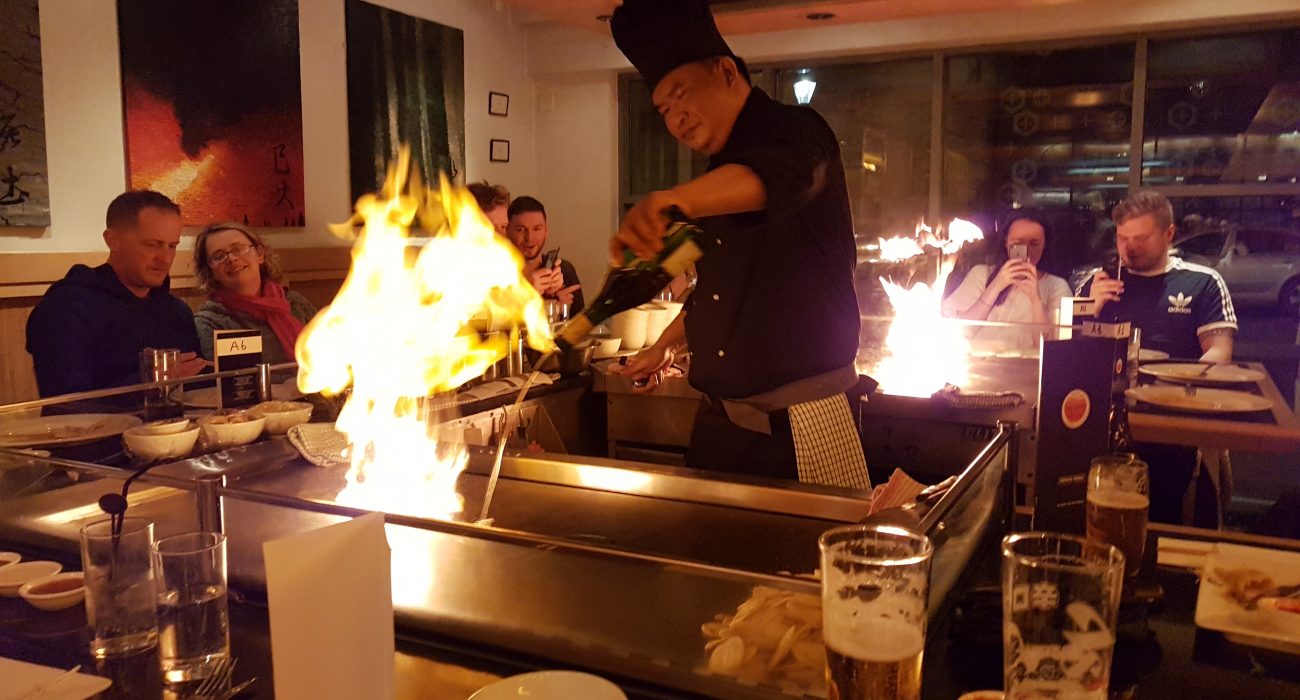 Upon entering Sapporo Teppanyaki I was taken back by an atmosphere of excitement, sprinkled with explosions of fire, followed by uproars of cheer. We were shown promptly to our seats where we awaited our five course Suki set menu. The first two courses were served together, the first being a deliciously crunchy Namasu salad and the second, a beautifully balanced Miso wakame soup. The contrast of textures was the perfect way start the meal. The chef then entered the middle of the Teppanyaki table, where he started frying slices of potatoes and flicking them into the mouths of customers.

We were then served our third course of duck rolls and chicken gyozas, the latter being exquisite and genuinely some of the best I have ever experienced, but these were unfortunately let down by the bland and unbearably doughy duck rolls.

I was quickly distracted, however, by the spectacular theatrics that were taking place in front of me including dazzling displays of fire, egg juggling and even the odd practical joke (I won’t ruin it for you). This was followed by spring onion wrapped in chicken fresh from the hot plate, served with mixed vegetables and sliced potatoes.

Finished with what can only be described as the most disappointing professionally cooked scallops I’ve had in a long time. I can’t say I was too surprised as cooking approximately seventy unevenly sized scallops will hardly ever result in the melt-in-your-mouth scallop we all desire. I would have much preferred something a little less ambitious and easily executable to compliment what was a promising dish.

The timing between the different components of the main course arriving took far too long and led to most of the course being cold. The generosity of the chefs was not to go unnoticed here though, as they were happy to serve more on my friends prematurely empty plate.

Onto the finale — the dessert. On offer was a choice of three desserts; an Oreo cheesecake, chocolate spring rolls and green tea ice cream. Being in the fortunate position of having three of us, I was able to try each of them. The Oreo cheesecake was average at best, the standard being comparable to the frozen section at your local supermarket.

Even more disappointing was the white and milk chocolate spring rolls which were wrapped in pastry about 4 times too many, making the desert nothing but ‘bouncy’. Finally, the green tea ice cream was surprisingly very pleasant and refreshing — something I would definitely recommend.

Sapporo Teppanyaki would be great for a fun, informal meal out with a big group of friends but otherwise it would not be an ideal destination for delicate and good quality cuisine.