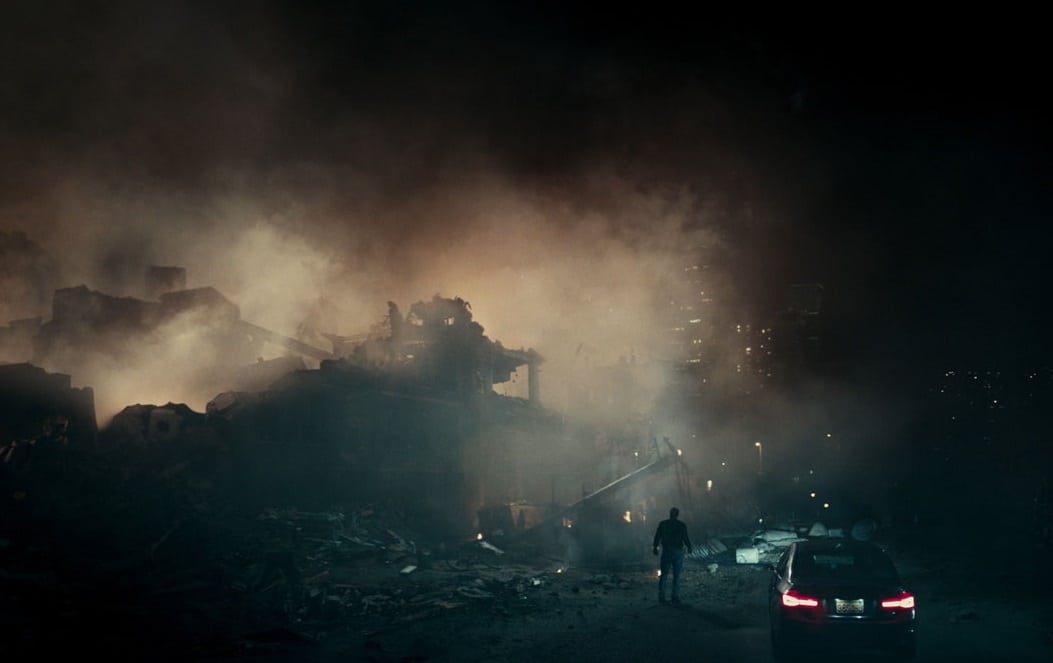 It’s been ten years and J.J. Abrams’ secretive and tantalising promise of a cinematic Twilight Zone-esque anthology series has still not quite come to satisfying fruition. 2008’s Cloverfield successfully blended the found footage horror of The Blair Witch Project with convincing teenage drama and ‘kaiju’ thrills, and 10 Cloverfield Lane was a slick and suspenseful abduction thriller that was tampered with to heighten the science-fiction subtleties of the script.

With The Cloverfield Paradox, Abrams and co. have taken advantage of the current streaming resurgence and attempted something unprecedented: releasing the latest entry in the increasingly foggy Cloverfield franchise on Netflix, with no hype or trailer other than its brief Superbowl teaser dropped on the day of the film’s release.

Prior to watching the clean 100 minutes of interdimensional space terror, this feels like an excellent move. Trailers and film journalism have often wiped away anticipation for a film by revealing its many twists, turns and moments in revealing advertisements and press junkets.

Netflix have challenged its status as top dog for streaming by testing our need for instant gratification, experimenting with a release format that does away with the cultivation of extended hype. Instead, a film could be uploaded to online platforms with a promise of a surprise cultural landmark that no one saw coming.

Rather than a ghostly rumour turned shock hit, however, The Cloverfield Paradox is a derivative and slapstick mess of science-fiction conventions and concepts, roughly sewn together to deliver some semblance of a Cloverfield prequel. Strangely abandoning its cinematic anthology concept, Paradox is a weakly connected direct predecessor to the giant monster fun of the first one, yet the reshoots and script doctoring seem to think that the connections are strong. Get a little too attached to its new concepts and clear deviation from any sort of franchise pandering, and our immersion is quickly ruined by a muffled ADR insert of “Cloverfield”, or a distracting cut to the nonsense going on back home.

The intriguing cast of international astronauts and scientists that include Gugu Mbatha-Raw, Daniel Bruhl and Chris O’Dowd become the victims of a dimensional rift that bombards them with every cosmic horror method of killing in the book. When Elizabeth Depicki appears spliced into the walls of the ship in an unconvincingly gory scene that fails to transcribe the skin-crawling mastery of body horror of Cronenberg or Tetsuo the Iron Man, their situation gets worse from there, and the film largely turns into an episodic account of cosmic death until the crew decide to do something about it.

Some concepts are interesting. Some concepts are glaringly idiotic, to the point of considering that the film could have quite easily started life as a pastiche of the self-serious Alien franchise, or other space thrillers like it. Missing limbs come to life, escape pods are flooded and handguns are 3D-printed. Any time the blaring score indicates an intended swell of tension wooden performances, awkward shooting and bizarre visuals stand in the way of its sequences becoming genuinely scary moments. Though still relatively sterile, the sets and costumes are all adequate enough to play a part in what could have been a nice companion to something like Black Mirror or Electric Dreams, but, if the script was ever worthwhile, it’s been tampered with to disintegration.

When the film is strong, it’s usually when Mbatha-Raw is on screen. Her family turmoil and existential dilemma is enough to make the final hurdle of the third act just about bearable, but this is all squandered by science-fiction conveniences and contrivances of logic that are usually brushed over if the rest of the film’s aspects are worthwhile (see Interstellar), but here demand solutions for far more questions than it answers. An enjoyable and heartfelt performance is enough not to knock Mbatha-Raw from the podium of promising upcoming talents, but Paradox is still an unfortunate smudge on the cast’s filmography that, until now, had been sound in its levels of quality.

Netflix and Abrams had the potential to charge the streaming format of film viewing with an unexpected innovation, to exploit its position as the number one online platform for original content with a brand new marketing move. Releasing a franchise film with no trailers, no leaks and no hype is an idea rich with possibilities, yet the chosen film to kick start the phenomenon was a meandering endeavour that feels more like a cynical ploy than an exciting experiment. Netlix’s Mudbound and Okja have proven that the streaming giant does have an eye for quality, but it’s apparent that they didn’t have their glasses on when it was decided that The Cloverfield Paradox could be a smash hit for online cinema.