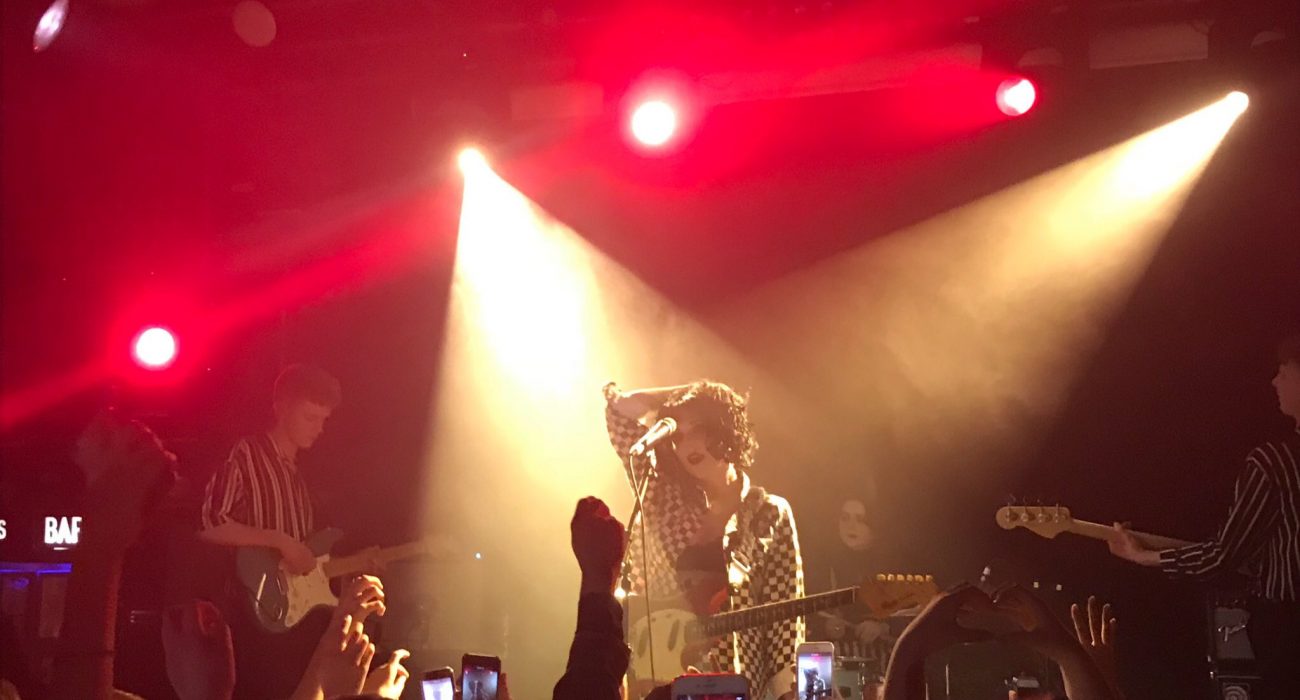 Like the rest of the Dirty Hit gang, Pale Waves are following in the hugely successful footsteps of their fellow label cohorts. Within the last two years, this hotly tipped quartet have received accolade after accolade. Following on from several massive tours with The 1975 and their own headline tour across the States, Pale Waves are one of the best bands out there at the moment.

The group drifted onto stage, accompanied by an ominous electronic hum in the background that set quite an eerie tone throughout the venue. Drummer Ciara Doran counted us all in to the single ‘Television Romance’ and suddenly the lights came up and everyone was dancing. Lead singer Heather Baron-Gracie was already commanding control over the crowd with her crazed expression and floaty voice.

I’ve genuinely not seen people go this mad for a band since The 1975, and if that’s any indication as to how big Pale Waves are and will no doubt go on to be, then I don’t know what is. With would-be-mentors Matty Healy and George Daniel being involved in their musical production, you could definitely feel their synth-pop influences shining through. But rather than rely on the success of their contemporaries, Pale Waves are able to blend 80s aesthetics with a 21st century flare.

“And I swear that I’ll never stop loving you, and I’ll die by your side if you want me to” are the sort of emotionally charged lyrics that the crowd screamed in unison back to Heather. It’s a nod towards 80s romantics inspirations such as The Cure. Pale Waves have indeed placed themselves at the forefront of goth-pop and certainly have the looks to match.

Songs ‘The Tide’ and ‘Heavenly’, had clearly been polished and perfected to arena anthem quality after being ‘brought back from the dead”, according to Heather. This rebirth was greeted with electric enthusiasm from the crowd, especially from fans who knew these tracks from when Pale Waves were in the early stages of their career. Hearing them live after such a hiatus had everyone in the venue screaming.

Despite the somewhat sombre nature of the lyrics that may otherwise want to make you lock yourself in your room and cry with a bottle of Echo Falls, Pale Waves have this uncanny ability to make you feel inexplicably happy. The combination of jangly riffs and undeniable catchy melodies from the entire band just make you want to get up and dance. Even with the showcasing of some unreleased songs, the band never disappoint.

I promise you now, in a year’s time (or maybe even less), Pale Waves are going to be massive. Genuinely. This isn’t speculation, rather an assertion. They might not be everyone’s cup of tea, but for fans of The 1975, being a hopeless romantic or just having a good old bop with your mates, Pale Waves are the ones to watch this year.