Pedestrian signals across Manchester city centre will be replaced by new designs that use gender symbols to represent LGBT+ relationships in honour of The Manchester Pride Festival.

34 traditional ‘green-man’ signals will be transformed over the course of the weekend on some of Manchester’s busiest streets, including Whitworth Street, Sackville Street, and Princess Street.

The signals are manufactured by electrification and automation company Siemens, who also provided similar designs used during Bournemouth Pride earlier this year and London Pride in 2016. 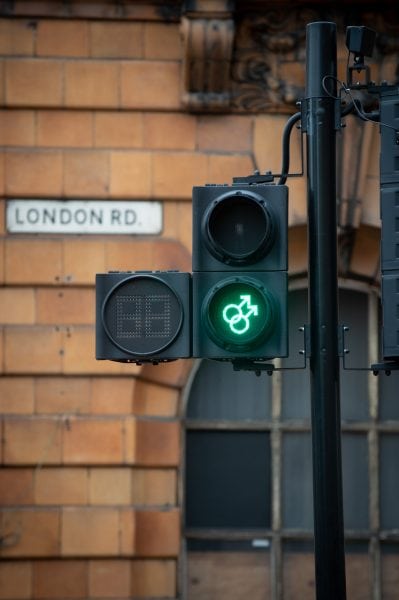 Siemens is also sponsoring a community café located in the Gay Village during the festival, which aims to provide a space for relaxation and socialising. Jurgen Maier, CEO of Siemens UK, said he was “proud” to have worked with Manchester Pride, and that “Diversity and inclusivity is very important to Siemens”.

Mark Fletcher, Chief Executive for Manchester Pride, said: “It’s great to see Siemens stepping out in support of LGBT+ people”, and added that the traffic lights are “fun and engaging”.

Manchester Pride Festival is an award-winning celebration of LGBT+ life and runs from Friday 24th– Monday 27th August. It is made up of several events, including The Big Weekend, The Manchester Pride Parade and The Candlelit Vigil.

The Big Weekend is set to bring artists such as Rita Ora and Sigala to the city centre. The Parade will take place on Sunday 25th August, and The Candlelit Vigil will end the festival.

LeadMCR roles explained – Could this be you?

Looking for a post-grad job opportunity? Lead MCR is back with plenty of leadership and team opportunities to improve Manchester’s SU

What’s going on in Universities around the UK? Find out here