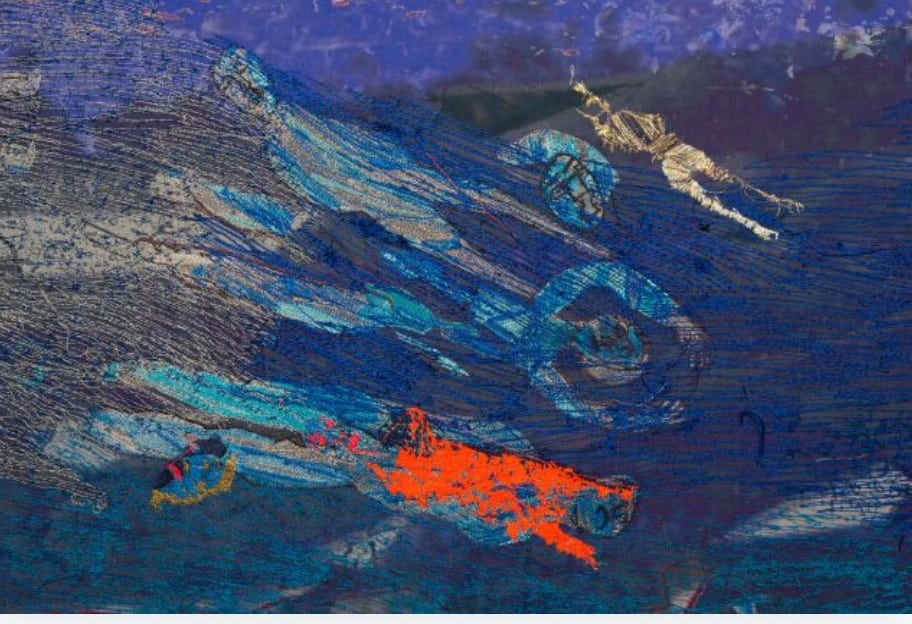 Provoked by the Migrant Crisis, Alice Kettle’s wonderful project and exhibition ‘Thread Bearing Witness’ uses the process of stitching textiles to transcend the modern rhetoric of borders and discrimination, giving voice and solidarity to displaced people.

I had the immense privilege of meeting Alice and her fellow artist, friend, and refugee at the exhibition at the Whitworth. In our interview the true warmth and inclusiveness of the project became clear.

The exhibition displays a mixture of large scale pieces produced by Alice, which are informed and inspired by the narratives of refugees, alongside works made by other artists, groups, men, women and children.

When walking through the exhibit, one understands how this is the combined work of numerous human connections. Indeed, the names of all the refugees and asylum seekers who produced these works with Kettle centrally adorn a wall. Cultural heritage, creativity, and resilience is weaved integrally into this collaborative exercise.

As soon as you enter the space of ‘Thread Bearing Witness’, the Stitch a Tree Project is the first piece that captures both your attention and something of the project’s primordial essence. A forest of hundreds of individually-made, individually-inspired stitched trees covers a huge wall. This work was made by volunteers across generations, races and genders who made their own tree patches to demonstrate support for displaced individuals.

Kettle’s affinity for working on a large scale can be perceived in this exhibition, where three huge pieces occupy the vast space on the second floor of the Whitworth: SEA, GROUND, and SKY. The scale of these pieces reflects the mass of human connections and partnerships formed during this project.

Through the shared stories of migrants, Kettle forms spaces of patterns, sites, and kites in GROUND and SKY, the latter a more optimistic expression of hope. SEA explores the dangerous journeys taken by migrants that have become a frequent item of media coverage. As one of the first of the new works for this exhibition, SEA arrests the viewer as a dreamlike, ultramarine arrangement of incandescently coloured bodies flowing in patterned motion.

Alice described the medium of stitch as a way to think about life and the world, which underpins this project’s raison d’être. You can change the world with stitch; we live in a thread world where threads can become interconnected and brought together, forming something new. The use of embroidery functions as a way of decorating and drawing, but also mending and making something new. Seen through this optic, art becomes an exercise in valuing human life and dignity.

The project describes migration as “the defining issue of our time”, and with the current controversial and heated discourse surrounding the refugee crisis, the role of art in the expression and validation of migrants is truly powerful.