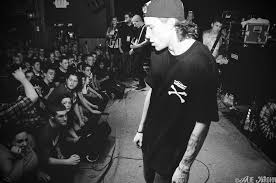 While it may be easy to think of The Story So Far as relative newcomers to the pop-punk scene, they have in truth been around for over a decade. Established in 2007 in California, The Story So Far have released several critically-acclaimed albums, bringing an edgier, more hardcore-influenced sound to the genre than many of their contemporaries.

Their latest release, Proper Dose, comes after the longest interval between the band’s album releases to date; their last album was the eponymous The Story So Far in 2015. With Proper Dose, the band show their more adult, mature side; deviating (though not completely) from the usual pop-punk fayre of relationship angst and hometown hating.

As the title of the album implies, there are plenty of references to drugs; the first single from the album, ‘Out of It’, details the experience of numbing one’s feelings using, as lead singer Parker Cannon describes it, an “appropriate opiate”. While it may be easy to include drug references for the sake of it, and I do think that maybe that did happen once or twice on the album, I am of the opinion that for the most part they are appropriate and work well.

The theme of numbed feelings continues into the second single, ‘Upside Down’, which attacks the feelings of getting older and moving away from the feelings that may have motivated the band to write in the way they used to.

This is really compounded in the album’s acoustic, sad track, ‘Take Me as You Please’. This is where there are echoes of the traditional pop-punk style — the song is about a lost relationship, but rather than dwell on it as the band may have done in other albums, the theme is, as with much of the album, about moving on. Again, featuring references to drugs, it’s perhaps about how these can modulate — and moderate — emotions. The instrumentation, even on the more upbeat tracks, reflects the new mood of the album; more calm and measured.

Overall, the album presents a much more melancholy, mature feeling than their previous releases. As the saying goes, write what you know; The Story So Far have definitely followed this mantra to great success. Could they have written a good album with less mature, reflective, more stereotypical pop-punk lyrics? I don’t doubt it. Would it be as sincere and enjoyable? Probably not.

As well as the band, I think their fans are maturing, too. People who were in their teens in 2007 are now adults in their twenties (and perhaps even thirties); they have a different, more reflective outlook on life. For your favourite bands to mature with you is probably a welcome experience for many.