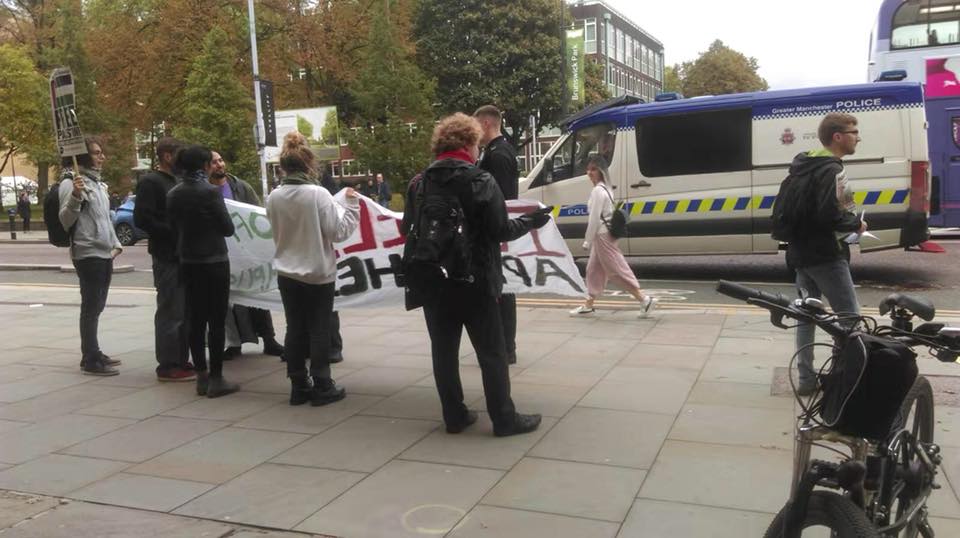 A protest staged by the BDS (Boycott, Diversion, Sanction) campaign was interrupted by six police officers in a van outside the SU on Wednesday 3rd October.

The group of 10 students were protesting against the University of Manchester’s financial investments in companies that contribute to the Israeli oppression of the Palestinian people.

It aimed to raise awareness of the civil and human rights abuses of the Palestinians in the occupied territories, as well as protest the University’s financial investments that, they argue, proliferate this abuse.

The protesters received a lot of verbal abuse from the public and eventually had the police called on them. Six officers showed up in a police van, eager to know “when the protest was going to end”. It is unclear who called the police.

The BDS commented that they are “a legitimate tool” for protest and will continue to do so until the University divests from companies that, they argue, sustain Israel’s “apartheid regime”.

The campaign group highlights significant University shareholdings in three companies: Caterpillar, Allianz, and GM Motors. They claim these companies contribute to the occupation and oppression of Palestinians.

One striking investment in the University’s portfolio is the £2,114,435.97 worth of shares in Caterpillar, a weapons manufacturer for the IDF.

The UN’s Human Rights Council blacklisted Caterpillar due to the company’s contribution to human rights violations. The company produces weapons for the IDF, as well as bulletproof bulldozers that are used to demolish Palestinian homes in the occupied territories.

Earlier this year, Ireland’s Senate passed a bill that bans the importation of products from Israeli-occupied territories. They are the first EU country to do so.

Meanwhile, in 2017, the British government granted £221 million worth of military licenses for UK-Israel sales.