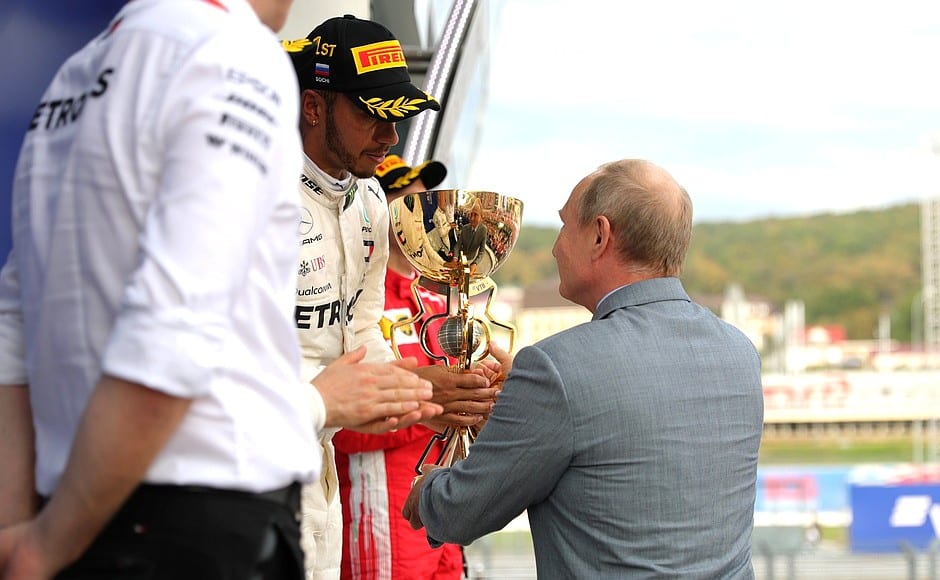 The crown means Hamilton joins an elite club  F1 champions, alongside just two others, Michael Schumacher and Juan Manuel Fangio, who he now stands level with on 5 titles.

The 33-year old knew going into the race that a seventh-place finish would be enough to earn him his fourth crown in five years, regardless of rival Sebastien Vettel’s result.

Red Bull looked to secure a fifth race victory of the season as Daniel Ricciardo and Verstappen occupied the top two spots in qualifying. The Australian started poorly, however, allowing Verstappen to take an early lead that he never looked like surrendering, eventually finishing over 17 seconds clear of Vettel, who despite moving up from fourth in qualifying never looked likely to challenge the Dutchman.

Hamilton and Mercedes looked uncomfortable throughout the race, their ultrasoft tyres clearly not the right choice for the Autódromo Hermanos Rodríguez, as the Englishman became the first of the leading pack to pit, during the 12th lap.

Hamilton began to look assured in second place, ahead of Ricciardo, but was left dissatisfied with the changes made in the pit, and eventually was calmly overtaken by Vettel. The German briefly set his eyes on race victory as Ricciardo pulled off due to a technical failure, failing to finish the race.

Verstappen, however, was in cruise control and took the chequered flag, the only disappointment for Red Bull being the missed opportunity for a one-two finish for the first time in five years.

Ferrari’s Kimi Räikkönen took advantage of Ricciardo’s exit and Hamilton and Mercedes’s continued mishaps to quietly steal a podium spot, following his victory at Austin the week before.

Further back, Valtteri Bottas took fifth spot having challenged for the podium in the opening laps. Nico Hülkenberg was the fastest behind the traditional ‘Big Three’ of Mercedes, Ferrari, and Red Bull, while Haas endured a nightmare race, as Kevin Magnussen and Romain Grosjean finished in the final two spots a number of laps behind the nearest rivals.

While a celebratory victory would have been idealised in the minds of Hamilton and his team, the ability to cooly see out a title-ensuring fourth-place finish in a race riddled with technical problems for the Mercedes camp underlined Hamilton’s sheer class.

The last few weeks have made Hamilton’s path towards the 2018 crown seem almost procession-like. This perspective belittles the 33-year old’s achievement, however. It is easy to forget that Ferrari and Sebastian Vettel left Silverstone in July with an 8-point advantage at the top of the standings — a fifth-straight Mercedes championship win looked an uphill challenge, not a formality.

For many, it was the events of a dramatic next race in Hockenheim that proved the season’s turning point. Hamilton recovered from 14th place to steal a narrow victory over teammate Valtteri Bottas, while Vettel crashed out of the race after a serious error in the wet conditions. Hamilton and Mercedes left Germany with a 17-point lead, and never looked back in an unrivalled domination of the season’s second half.

Picking up top spot in the Italian, Singapore, Russian, and Japanese Grand Prix, Hamilton boasted a 67-point advantage over his rival after victory at Suzuka, re-igniting the image of an individual and team that have come to dominate the industry in the past four years.

Given the way that Mercedes have closed out the title fight this season, it would be easy to forget that Toto Wolff’s team were on-par with Ferrari at the start of the season, and even fell behind in the battle of technical developments, with Vettel racing in the quickest car of all from the British Grand Prix onwards.

This, along with Hamilton’s admission that this season’s challenge from Ferrari was like one that he had never faced, shows the incredible professionalism behind this season’s victory. Mercedes’s technical choices have been excellent while Hamilton’s judgment has been essentially flawless — far from the case of his opponent Vettel.

With the picture for the 2019 campaign already taking place, Hamilton is emerging as a clear favourite to chase down Schumacher’s record of 7 titles and become the most successful driver in the industry’s history.

Big changes are needed at Ferrari if they are to scoop their first championship since 2007.