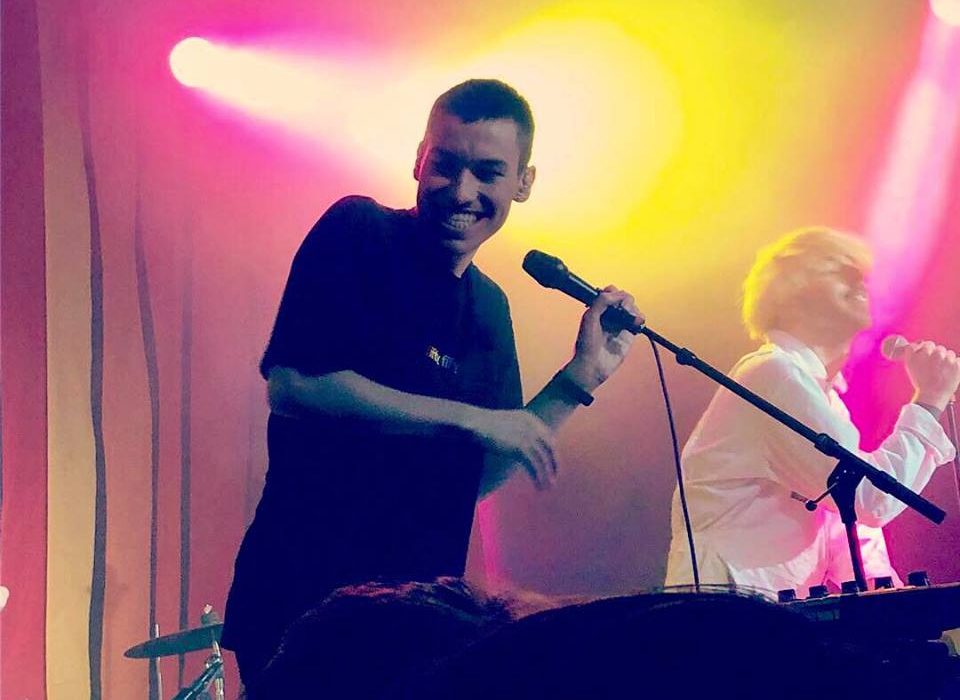 Bad Sounds, a rising British band, came to Manchester’s Gorilla as part of their UK tour this October.

Opening for the band was the grungy pop rock foursome, Indoor Pets who really took ownership of the stage. I was intrigued by their deeply fun and potently rock infused style that made for some brilliant mosh pits and created a very real and unexpected hype early on in the night.

Lead vocalist Jamie is a quirky personality, and I had to admit that it was somewhere between brilliant and slightly hilarious when the band broke out into some pretty spectacular instrumental breaks.

Their popular track ‘Being Strange’ really captures the essence of this strangely cool band and I will be interested to see what they have to offer when they go on their first headline tour.

After a short break it was finally time for Bad Sounds to spring onto the stage and without a moment of hesitation. They launched into lead single ‘Wages’ with a fervent energy and flash of lights across the banner-strewn stage. As Ewan and Callum took centre stage the anticipation for the highly regarded track is apparent.

However, the band don’t package themselves as great prophets of musical genius. In fact, they seem to have tapped into the art of successfully poking fun at the concept of being the “perfect” artist. There was a sense of acknowledging their limitations and that simply maximised their connection with their sounds and command of the room.

The way they dash and dart around the stage is really something to see, and absolutely shows how impassioned they are about their work. Every instance is used to build up a playful environment where the artist/audience barrier is broken and in its place, there is a collective appreciation for sound and visual joy.

Throughout the gig there were moments of downtime to break up the relentless force of sound and light. These moments of almost absolute darkness invited the audience to reflect on their experience in the Bad Sounds imagined ‘get better’ clinic.

Although it appeared rather gimmicky in places, there was a certain quirky charm about the idea of a voice from beyond bringing the room together towards the golden tone of a singular light bulb at the centre of the stage. It had a level of humour about it that captures their optimistic positive message, even in the face of fear and the unknown.

I quickly caught up with Ewan after the show and he explained that they had worked hard on creating a specific atmosphere and keeping the mood fairly light; “the voice your hearing is actually Olivia’s dad (the drummer) talking through this script that myself and Callum made”.

Adding that they aimed to be playful in the creative process of building the aesthetic image and sound of the wider tour. In tracks such as ‘Avalanche’ which has been re-imagined in the band’s various guises, there is a beautiful sense of progression from an initial idea into a central track that basically inspired the eventual album title Get Better.

The introduction of two guitars to their set-up for the track ‘Thomas is a Killer’ brought with it darkness across the stage and created a moody undertone that broke away from their otherwise upbeat outlook.

The lyrics in this track reflect a sense of time and fragility that paired with a deep blue-purple light, showed the varied capability that Bad Sounds offer. A sharp contrast that appeared to explore a painful moment for the songwriter which had an opportunity to resonate within the room without completely losing the positive ethos of the show. It certainly resonated with me.

The band re-emerged spectacularly with their final,  joyful burst of energy into ‘Are you high?’ which sent the crowd into a wild fever once again as a smattering of yellow and red balloons flew across the room.

In Bad Sounds there’s a clear genuine love for the exploration of music – a style which cannot be replicated or faked. Their dedication to creating a lively, fun experience at their gigs is so impressive and ultimately pays off for fans and critics alike.