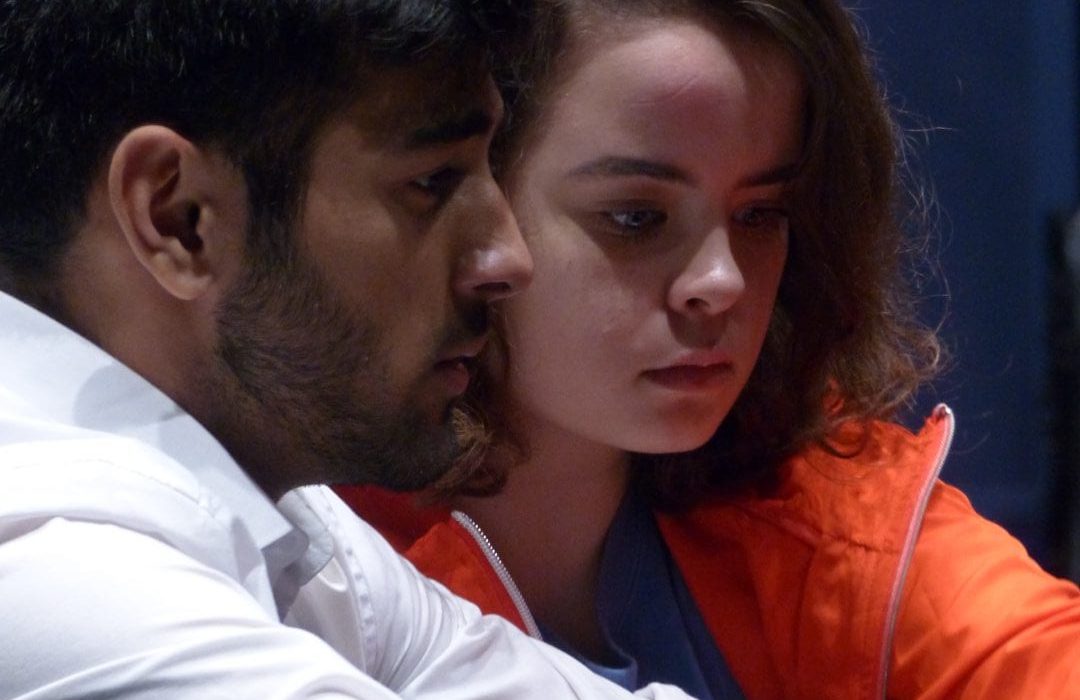 ‘One Minute’ was the tragic story of a chaotic world in which Daisy, played by Jojo Rogers, has gone missing and the tumultuous consequences that then follow as we see how the people involved in her search have been thoroughly changed by the event.

Co-directors Kat Humphrey and Florence Dixon did an amazing job in building the relationship between Daisy and her mother Anne (Georgia Brown) by choreographing a moving motif between the two characters for the audience to see as we came in to take our seats. The movements showed fluidity and grace. The embraces between the two characters, coupled with the piano ballad played throughout the play, was heart-warming and even sad considering the context of the play.

A huge congratulations to the success of the show has to go to Sam Whitehouse, the designer of the production. The use of the projection counting the days Daisy was missing, kept reminding the audience of the aching theme of the play. There was a beautiful image created on stage to highlight the change of season to Autumn, where leaves were poured on Daisy as she stood centre stage.

Grainne Flynn shone in her role as Mary-Louise, effectively showcasing her skills in creating a believably disturbed and anxious woman. Mary-Louise was clearly obsessed with the tragedy of a young girl and her inability to move past it perhaps due to her own tragic past. Mary-Louise’s relationship with Catherine played by Rosie Randall highlighted the necessity for support and friendship through difficult times.

Another notable relationship was between Gary (Kenan Vurgun) and Robert (Asan Iqbal). They were two members of law enforcement trying to save Daisy and then deal with her death, but they both fail to see themselves coming undone. Both performers effectively showed the emotional strain felt by law enforcement during tragic cases. It was to the actors’ and directors’ credit that they highlighted the humanity we often lose sight of regarding for those in law enforcement.

The anguish and pain shown by Georgia Brown, as her character Anne was told the news that the police were going to stop the full investigation into her daughter’s death, was heartbreaking portrayal of a mother’s grief. An honourable mention to Jojo Rogers, who may not have had a speaking role as Daisy but perfectly displayed all the emotions of fear and sadness through her facial expressions and body language.

Overall, One Minute was a good performance which highlighted a current and saddening issue.