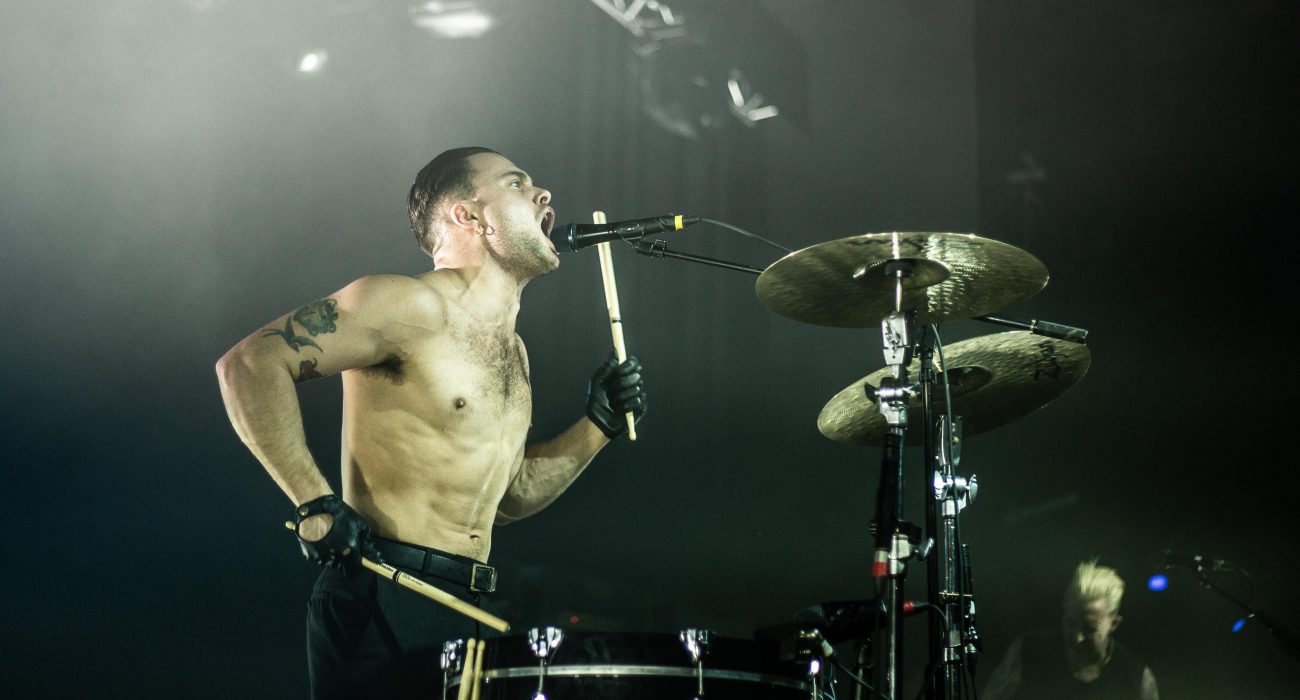 After the release of Slaves’ third studio album Acts Of Fear And Love, hunger for their upcoming tour has been rife. This anticipation that has proven more than well deserved.

Isaac Holman and Laurie Vincent continue to keep punk alive for a new generation with consistently electrifying performances and Manchester was no exception. With new material to offer fans, the setlist continues to grow in scope and diversity. Isaac’s latest lyrics explore issues from commercialisation to social media presence. Yet even with complex themes, the new tracks suit Slaves’ style well with chorus lines that a whole audience can chant.

The duo opened with a cover of Skepta’s ‘Shutdown’ which fans have grown to love and is now essential to any performance. Punk and grime compliment each other well, sharing common ground in political edge and aggression – although perhaps it would have more appropriate to start with one of their own tracks. Next came ‘Sockets’ with intense pacing on drums matched with thrashing guitar. From then on the tone was set for the whole night with mosh pits breaking out at every opportunity.

What remains impressive about Slaves is that with just two members they achieve a level of energy that many larger bands can’t even dream of. This was summed up perfectly with their performance of the fast-paced 45-second track ‘F*ck The Hi-Hat’. Isaac riled up the crowd with everyone repeatedly screaming the song title before its delivery. The whole affair was a middle finger to everyone who turned down joining their band in the early days. I don’t think there is anyway you can characterise this duo better.

Slaves make the crowd feel essential to the whole experience with a jovial atmosphere. Members of the audience were even encouraged to hug a neighboring stranger echoing this contemporary thriving punk ideology of love must be made known. During ‘Cut and Run’ they took two volunteers up on stage to perform the dance featured in the music video. Whilst one of the volunteers aced the dance, the other was unfortunately kicked off stage for lying about his credentials.

Highlights included ‘Photo Opportunity’ which was a welcome change of a pace in the setlist. During the acoustic rendition, fans were encouraged to put away their phones to fully appreciate the moment. It was disappointing to see some still recording; clearly, the point of lyrics such as “What are you trying to do to me? This isn’t a photo opportunity” was missed. The thematically similar ‘The Lives They Wish They Had’ features some of Isaac’s best lyricism to date, highlighting issues with how people present themselves on social media. The climactic finish to the track was one of the most impactful moments of the set.

The night would not have been complete without the final track ‘The Hunter’. This fan favourite remains the best live offering from Slaves and was a fitting end to an outstanding performance. It was disappointing that an encore was noticeably absent despite an audience calling for more, but there is little else to criticise from a band who have undoubtedly mastered their stage presence.